25 Days of Christmas: Day 24, Christmas Carols Are the Worst Brain Worm EVER

Last Friday I asked Hugh to switch the satellite station at the store from easy listening to holiday music, figuring that shoppers like to hear carols while sorting through holiday merchandise, except, of course, for when the carols are being piped through the store and the holiday merchandise consists of jack-o-lanterns and Power Ranger costumes, Hellmouth, I’m looking at you and, as usual, I digress…

…anyhoo, Hugh changed the station and the onslaught of carols began at the store. One song, in particular, has caused me many minutes of emotional turmoil because, the first fifty times that I heard it, I swore the lyrics contained the phrase, “It’s Christmas, time to lick the donkey” and I was like Dubbya. Tee. Eff? Lick the donkey? Is this some strange pagan ritual of which I am completely unaware?

And, no…on the fifty-first playing of the song, I actually went to the office to view the station monitor which is when I learned that the title of the song is Dominick, the Italian Christmas Donkey and, a quick search on Google provided the actual lyrics of the song which include no mention whatsoever of licking the donkey. Here is a small sample, just in case you have never heard the song and totally think I am making this shit up.

And, yes, the hee-haw, hee-haw sounds pretty much like one would expect to hear issuing forth from a donkey.

So, no licking; mystery solved. You know, other than the part where I have to ask myself what the hell a donkey has to do with Christmas. 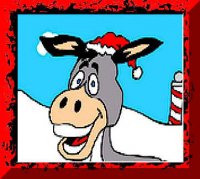 Hey, paisons! It's time to lick the donkey!
Posted by Chelle at 8:52 AM