Friday morning, I called the vet’s office to see if they could get Gilligan in for an appointment, he was still having litter box issues and had stopped eating. The vet was out of the office and an appointment was made for Monday at 10:30.

By 3:00 that afternoon, Gilligan was in complete distress, stumbling as he attempted to walk, incontinent and obviously failing. Hugh called the vet on her personal cell phone and she told him that she was just getting back into town following a week in New Mexico with her son. She instructed Hugh to race Gilly in and, Hugh, The Teenager and the Man-Cub bundled him in warm towels and made the drive into town.

At that moment, I was relaxing on the massage table, about to begin a much needed rub down. Needless to say, the appointment was rescheduled, clothing was hastily thrown on and I met my teary-eyed husband and offspring at the vet’s office.

Gilly was…not good. The doctor diagnosed an extreme kidney and urinary tract infection and gently informed us that our fluffy furball was in acute renal failure. She showed Hugh how to administer subcutaneous liquids via an IV port in Gilly’s neck, prescribed a round of major antibiotics and told us to prepare ourselves for the worst. If Gilly made it through the weekend, she would see us at the previously-made appointment on Monday. She was…not hopeful.

That night, Gilly collapsed under the Christmas tree, unable to walk, unable to control his bladder, unable to eat and scarcely breathing. We took turns stroking his silky fur and whispering our most tender goodbyes.

When he made it through Friday night, we were grateful although, not optimistic. There was no improvement and, if possible, he was even weaker than the previous day. Hugh valiantly administered the subcutaneous fluids three or four times a day, sleeping next to Gilly on the floor, since he seemed to prefer being under the tree and we wanted him to be as peaceful as possible. 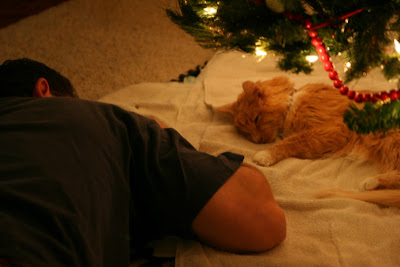 At one point Saturday night, Hugh settled Gilligan onto his chest as they reclined on the couch, a position that has always been a favorite of theirs and, in what we recognized as the ultimate gift to us, Gilly mustered up a low purr. It was the first time he had purred in a week and it was both the sweetest-and saddest-sound that I have ever heard. I sent the kids to their beds, convinced that Gilly would take his leave of us sometime during that night.

And, while we didn’t see any improvement, we had to give him credit for fighting so hard.

Late last night (Sunday), I sat down on the couch next to Gilligan; we had bundled him in warm towels and were basically trying to keep him comfortable, having accepted the fact that there was very little else that we could do. I happened to have a plate of banana bread with me and Gilly’s head popped up at the scent of his favorite forbidden treat (since he was a kitten, he would jump up on the countertop to get at banana bread, often going so far as to chew through aluminum foil to obtain his prize). It was the first interest that he had shown in food since Thursday and you can be sure that I was not about to deny him. He ate almost as entire slice from the palm of my hand; I cried the entire time.

This morning, as Hugh lay sleeping beside him, Gilligan got up, stumbled over the train that encircles the Christmas tree and tried to drag himself to his litter box. The motion awakened Hugh, who put him in the box where, for the first time in over a week, he peed appropriately. Then, he took a few bites of kibble from Hugh’s hand, lapped at his water dish and then curled up for a nap, thoroughly exhausted by his efforts. For the first time in three days, Hugh and I breathed a little easier.

As I type this, Gilligan is laying next to me on the couch. He is able to walk short distances, has used his litter box, is taking food by the mouth, has started to put up a fuss when Hugh administers his IV and has become quite vocal about the injustice visited upon him by being bathed in a warm bathtub.

I have no idea what tomorrow will hold for him but, today, he is gaining strength and we are starting to see more of the old Gilligan. We will continue to treat him with IV fluids, antibiotics, rest, prayer and banana bread and, with God’s grace, will celebrate our seventeenth Christmas with him on Saturday.

None of us could imagine a more precious gift nor can we deny that we have been blessed witha small miracle right here on Earth.