Even a Bad Horror Movie Deserves a Sequel

I put at least fifty miles on my Tahoe yesterday; I drove to work, to the post office, and to the bank. I drove the Man-Cub into town for tutoring and, while he was practicing his sentence diagramming; I drove to Starbucks, to the Hellmouth and to a local department store to pick up a few things at Sephora (scored a great deal on Nars the Multiple in Copacabana, su-weet!). I picked the Cub up and drove him to baseball practice and I drove home. That’s…a lot of driving. At speeds sometimes slightly above legal limits and yet…

...as I gathered my belongings from the passenger seat prior to making my exit from the car, I glanced up at the windshield and, I shit you not… 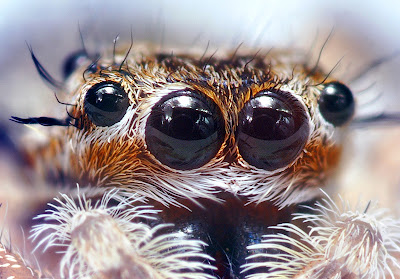 By all rights, that fuzzy bastard should have been flung to his death, run over by a semi tractor and had his carcass picked over by scavengers, yet, there he was, staring at me with malevolent intent, just like a homicidal maniac that has been stabbed, shot seven times, ran over with a car and burned by a flamethrower yet; just keeps coming back to inspire more terror in his victims.

As an aside, there will be an extra pair of underwear in this week’s wash. And, I am considering the purchase of an actual flame-thrower, not just for spider-killing duties but because I think it would be fun to have at parties. A flamethrower would make toasting marshmallow a breeze.
Posted by Chelle at 8:58 AM