Hugh has been asked to participate in the shooting of a pilot for a show about commandos and guerilla warfare. I think; I wasn’t really paying attention when he described the show to me, I actually zoned out completely once he started talking about assault rifles and heavy artillery.

The jist of it is this; Hugh’s friend, who happens to be the inventor and manufacturer of some high-end army-issue weaponry, asked him to be in the show, which he is hoping will get picked up by The Discovery Chanel or The He-Man Network or some such thing (see above: not paying attention).

Hugh is two parts excited and four parts terrified of taking on the “role”, even though it is a reality-type situation in which he won’t have to memorize dialogue or plot-line or anything like that; he’ll just have to jump out of helicopters, shoot at targets, throw grenades into bunkers and that kind of thing. Indeed, the "role" is made for him and I have no doubt he will do just fine.

I have, however, taken to mimicking a director’s clapboard by clapping my hands together while shouting “CUT!” whenever I feel like changing the topic of our conversation. Then, I yell “MAKEUP!”, and slap him on the face as though I am holding a powder puff. It never gets old.

For me, anyway; I imagine he was over it around the first time that I did it but he has to deal with it because that is the price one pays for fame. 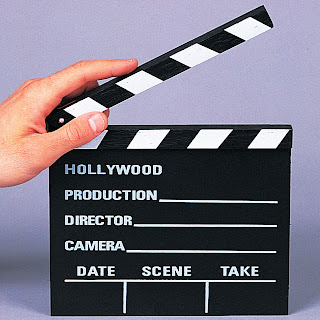