I Am the Queen of Passive Aggressiva. Where is My Crown?

The Teenager made it to DC without incident, save for the confiscation of her toothpaste at the small airport in Neighboring City. Her toothpaste! After we spent several minutes of our day searching for 3 ounce bottles for her shampoo and conditioner because we had heard horror stories about 5 ounce bottles being rejected during inspections, she has her toothpaste confiscated. All I can say is; a TSA agent working at Neighboring City Airport now has minty fresh breath. His colleagues must be so relieved.

Because, when she gets back home, The Teenager would also like to have minty fresh breath, I picked up a new tube for her at The Hellmouth yesterday. I also picked up either a nasty cold or allergies; I’m not sure which, whichever one you pick up in the toothpaste isle of The Hellmouth, obviously because, this morning; I woke up with a sore throat, runny/stuffy nose and mild headache. This makes me about as happy as you might imagine. Also, when I called The Hellmouth to ask about their policy on returning cold germs and/or allergies, they were less than helpful; I count this as yet another strike against The Hellmouth.

And, while I’m in Full Complaint Mode, I will mention that I went to two separate Starbucks stores yesterday and the baristas in both locations managed to royally screw up my order for a Venti skinny Cinnamon Dolce Latte. The barista in the first store made my drink with whole milk and three pumps of full-sugar cinnamon syrup and then tried to pass the drink off as “skinny”, never mind that I was standing right there watching her. I took pity on that particular girl because it was obvious that she was new to the Starbucks world and was already flustered and anxious. The barista at the second store ( where I went after pouring out the first drink without complaining because I was trying to be nice. And, because I avoid confrontation at all costs) made my Venti drink in a Grande cup and applied a nice thick coating of whip, making the drink less than “skinny”. That time I did complain and a new drink was created so; I did eventually get my caffeine fix but, holy Hannah, baristas! Let’s try to get this stuff right the first time. 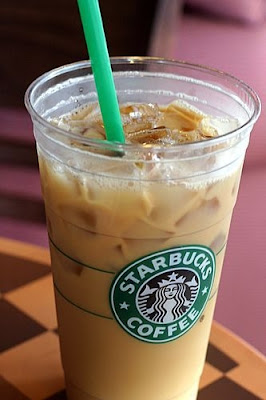 Elixir of the GODS

Ohhhh…it suddenly occurs to me that I might have picked up my cold/allergy misery at Starbucks, probably from the barista to whom I did complain about my screwed up order.

See? It just doesn’t pay to complain. On the bright side, I think I would recognize that barista so, when I return to the store later this week, I will be sure to tip her a dollar.

A dollar I have coughed on, breathe upon and generally coated with my germs.

Ok, not really but, duh; see above title of this post.
Posted by Chelle at 8:47 AM