My dad has from suffered extreme back pain for most of the past ten years, maybe even longer. Due to the combination of many factors, including advancing scoliosis and the general deterioration of the discs and cartilage in his spine; he was becoming less and less capable of living a quality life. In addition to his back problems, he also had a bum shoulder and some issues with his neck, so; over the course of the past year, he has endured four separate surgeries, the last two-on his back-were done over the course of three days earlier this week.

Thankfully, he came through the surgeries with flying colors and is now on the mend. Granted, he will have to endure physical therapy and rehabilitation but, if he comes out of the experience with even a tenth of the pain that he had before; he will be thrilled.

As will we all.

In a little bit of irony, while my dad did well with surgeries this week, Finnigan was not so fortunate.

A routine procedure (bye-bye, nutsack) went horribly wrong and the vet lost Finn on the table. Thankfully, she was able to revive him but, because his heart maintained such an irregular rhythm for so long, both during the surgery and immediately after, the vet suspects that Finn has a congenital heart defect of some sort. Of course, her practice isn't equipped to diagnose such a thing so; she has referred us to a specialist in Neighboring City.

The specialist charges $400-$800 to administer the ultra-sound that will tell us whether or not Finn has a bum ticker. Hearing the estimate may or may not have caused my own heart to go into an irregular rhythm but, that is neither here nor there.

So. We have a decision to make.

When he isn't on an operating table, under general anesthesia; Finn is healthy, rambunctious and perfectly normal. When he goes under, he is knock, knock, knocking on heaven's door, and, while there is a possibility that it was the anesthesia, itself, that caused Finn's deterioration on the table (although, the vet said she had never seen a reaction like his), there is also the spectre of a congenital  heart defect that will need to be treated for the remainder of Finn's life (although, the vet also said that she couldn't detect a heart murmur at any time prior to his surgery nor was she able to detect any type of irregular rhythm following his weaning from the anesthesia).

So, do we pay an exorbitant amount of money to find out, or, do we accept Finn, as is, for as long as God intends?

I really hate being an adult, sometimes.

Anyway, we have an appointment with the specialist next week. I'm going to speak with a friend of a friend-who happens to be a vet-for his opinion of the case before then, and, if he agrees that we need to keep the appointment, we will. Because, obviously, we love this damn cat and want to do whatever we have to do to keep him healthy, even if that means selling one of our own kidneys to pay for the procedure.

Or, my old Rebel, if worse comes to worse. 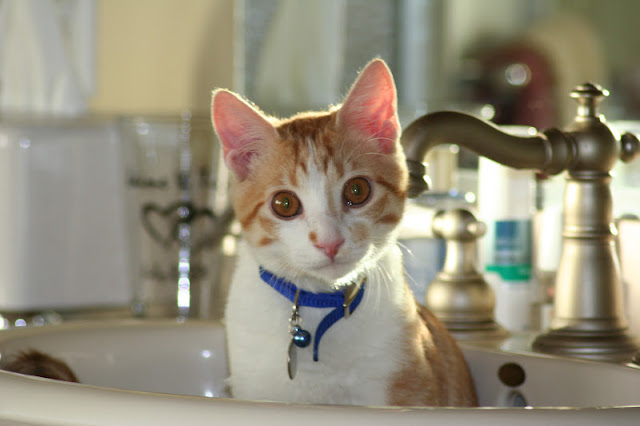 C'mon, you know you love me more'n your luggage.
Posted by Chelle at 9:18 AM