The Little Engine That Could

As of today, I have gone eleven days with out Diet Pepsi. While that's not exactly a record for me (Six weeks during Lent of 2009 or 2010, I believe); it is still pretty impressive. Jana asked me if I feel any differently than I feel when I am drinking the soda and I can honestly say that...I do not.

In an effort not to simply trade an iced tea habit for the Diet Pepsi habit; I have increased my water consumption. I'm not just drinking plain ole water, however; I am drinking something called Sassy Water. Sassy Water is a concoction created by the folks at Prevention Magazine; the recipe calls for water (duh), one sliced cucumber (Why, yes; I do hate cucumbers, thank you for remembering), one sliced lemon, numerous mint leaves and a teaspoon of grated ginger root.

The water is supposed to flush the digestive system, and, when consumed in conjunction with a specific diet; to help you lose up to five pounds of belly fat, or some such thing. I wouldn't know, because, I am not following the diet. As far as the water flushing my system goes, I have no idea if it's working or not. Jana asked me if I feel any different since starting the water and I can honestly say that...I do not.

I do have to pee approximately ten million times a day as well as dealing with the after-taste of cucumber (gack) in my throat for half an hour after every sip, but, otherwise, nada.

So, when The Teenager asked me if I intend to stay off the Diet Pepsi, like, forever; I said "Probably not". Indeed, I'll enjoy an occasional soda; I just want to limit my daily consumption. She wondered why and I said "Because I can".

And, apparently, I really can.

It should be noted, however, that S(assy) Water is no substitute for the sweet nectar of the Soda gods. I'm just saying. 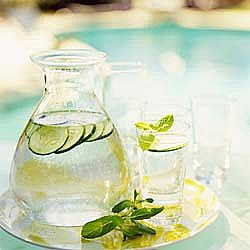