The next week or so is going to be heavy with Paris posts. I could apologize for that, but, since I probably won't have the opportunity to visit Paris again in this lifetime, I won't. So, if reading about my trip feels like being forced to watch your Great Aunt Erma's slideshow of her trip to Yellowstone that one summer, do feel free to click on; I promise not to hold it against you.

When I thought about how to best organize my thoughts on our trip, it seemed only natural that I would blog about how we spent each day, but, there was so much that we packed into each day; I think it might be hard to do all of it justice in one post. So, I have decided to break the posts up not by day, but by experiences. For example, our first full day in Paris consisted of the Champs Elysees, Eiffel Tower, Notre Dame, The Moulin Rouge, and the Eiffel Tower at night; there is no way that I can pack that all into one coherent post. Instead, I will focus on one or two elements of the day and try my best to be thorough, after all, the purpose of writing this is to remind me of the trip as I age and memories become hazy; skimming the details would lose a lot of the impact of the trip.

And, now that I have written a book defending my stance, let's move on to the actual post, shall we? Unless, of course, I have already Great Aunt Erma-ed you and you have wandered off to better things, in which case, no judgment!

So, for today: The Champs Elysees; home of high end shopping, cosmopolitan flair, and the Arc de Triomphe.

Our small boutique hotel was located the equivalent of an American block off the Champs Elysees and we were just a stone's throw from the famous arch. Thursday morning, after a full night of rest, from which we were somewhat able to recover from the exhaustion of our travels, we headed out to explore our surroundings. We were not disappointed.

As with all of the architecture that we encountered in Paris, The Arc de Triomphe is beautiful, with detailed masonry and majestic statuary. The fact that it is surrounded by modern conveyances creates an unusual dichotomy but in no way diminishes its' charm. 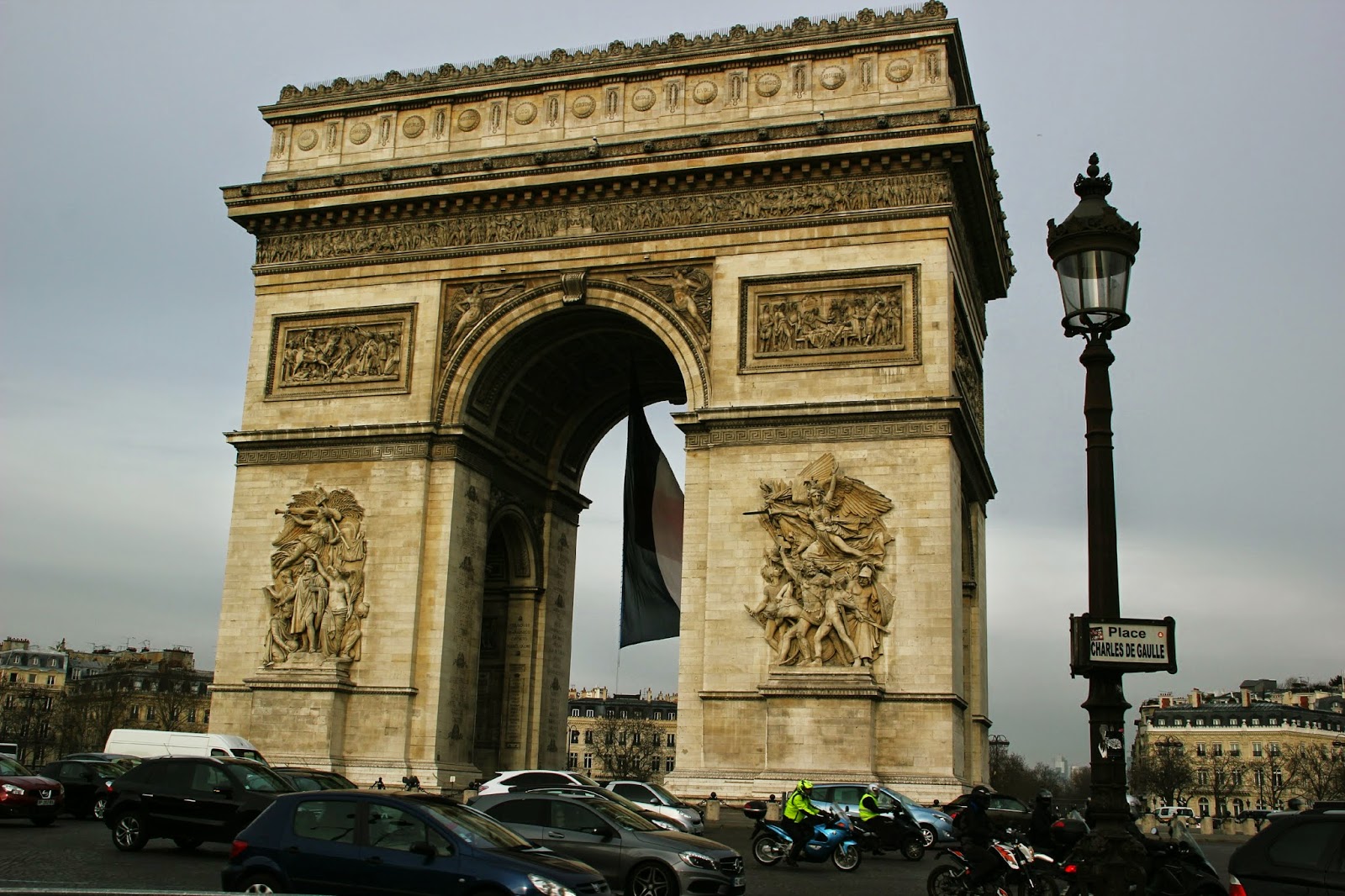 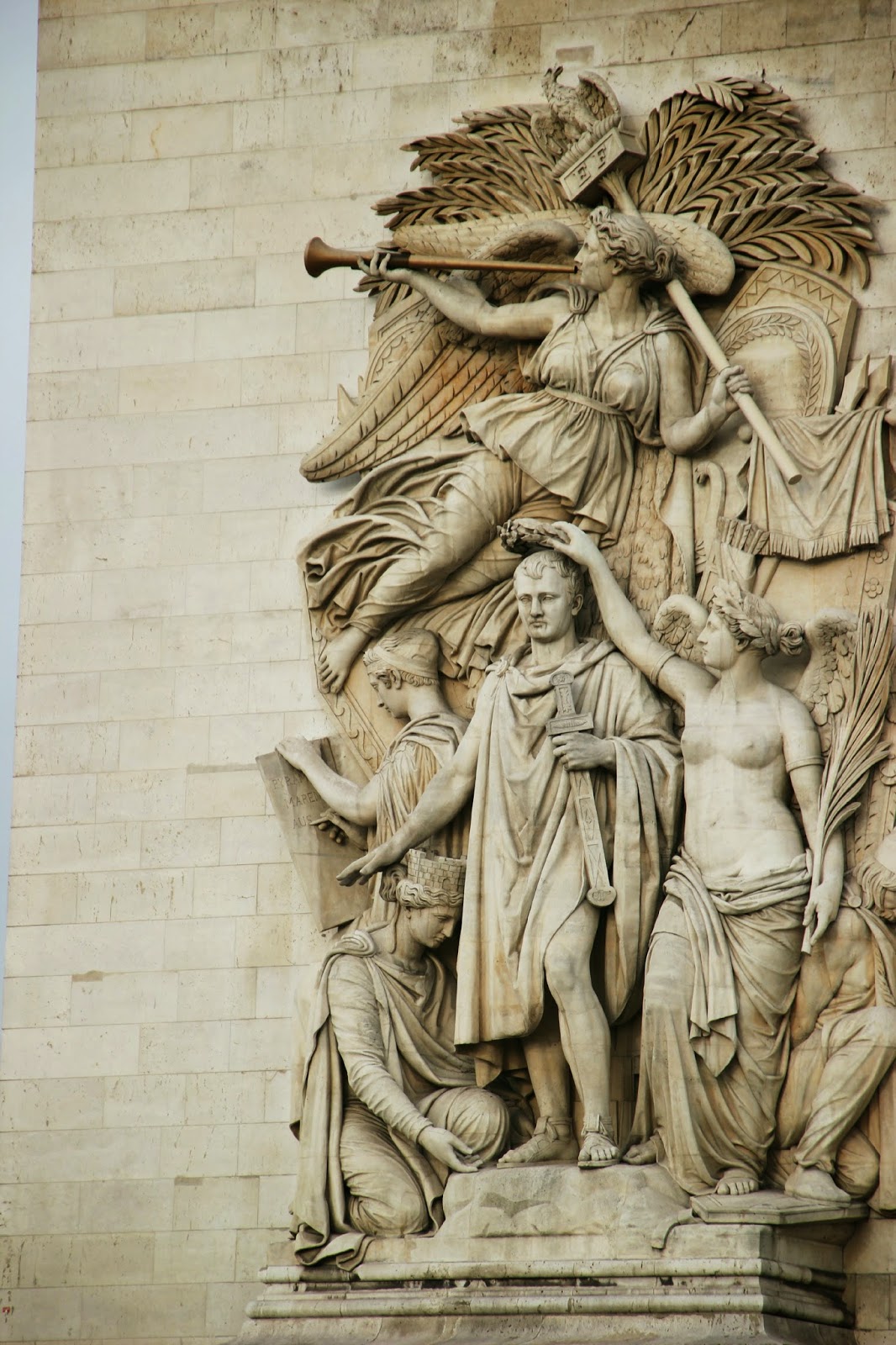 After giving the Arc its' due appreciation, we made a stop in a small café where we had the opportunity to learn the ropes regarding the use of euros, as well as learning that there is a definite difference between French coffee and American coffee, specifically, we learned that the French idea of American coffee is instant granules. That was interesting. The croissants made up for that perceived snub, however.

Upon leaving the café, we began browsing the shops along the Champs Elysees. It was interesting to see familiar stores in the mix, Sephora, for one. We hadn't planned on spending money that morning, but, the weather was quite a bit chillier than we had anticipated, so, a stop in a small souvenir shop resulted in the purchase of light gloves for me and gloves and a scarf for my older sister, who, was woefully unprepared for the elements. 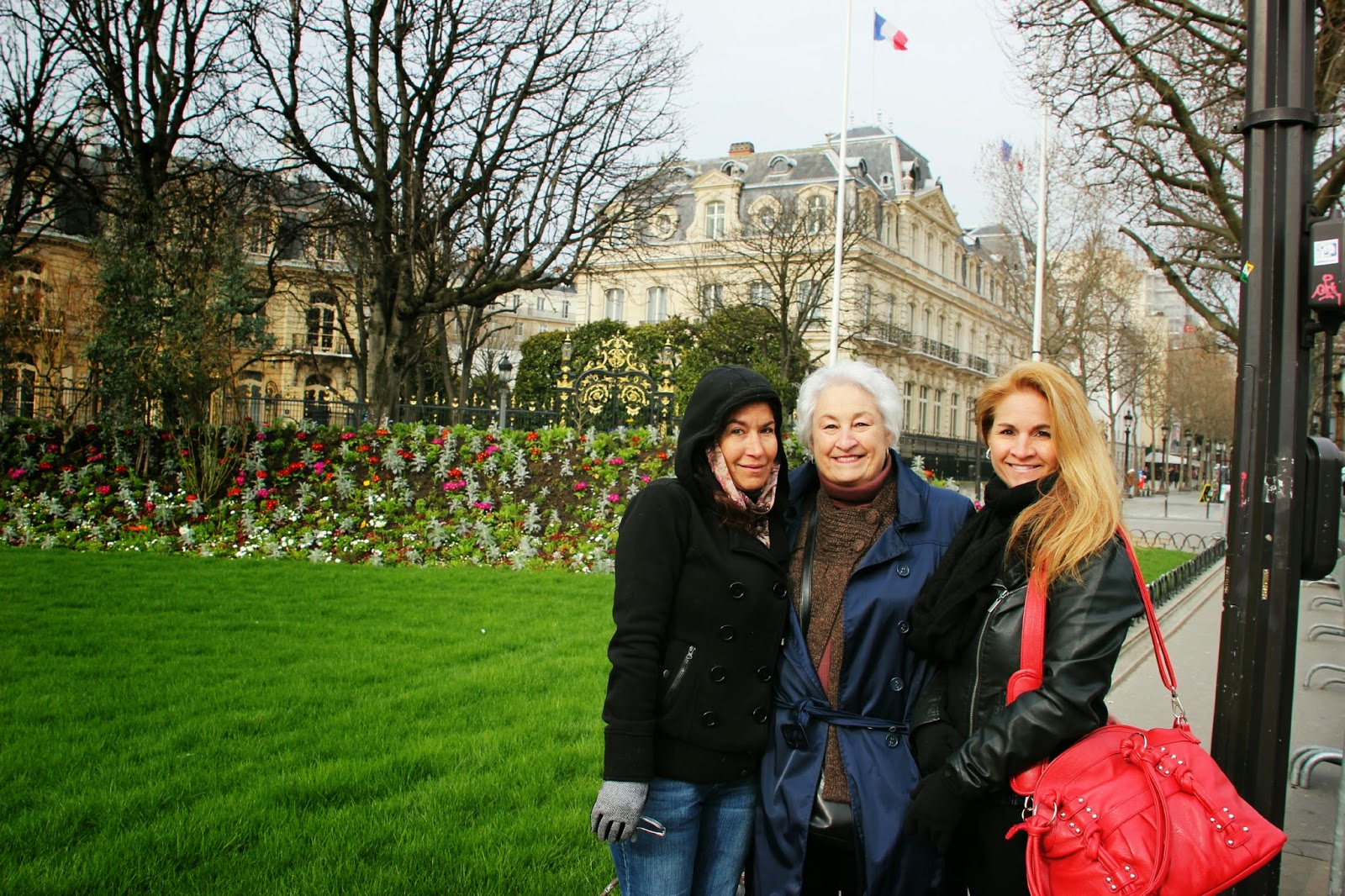 The Champs Elysees was on Barbie's bucket list for Paris and I don't think she was disappointed. She compared it a lot to New York City and was completely in her element. We followed her lead and were able to navigate the streets without a map and with plenty of time to take in the sights before turning our direction toward the Eiffel Tower. 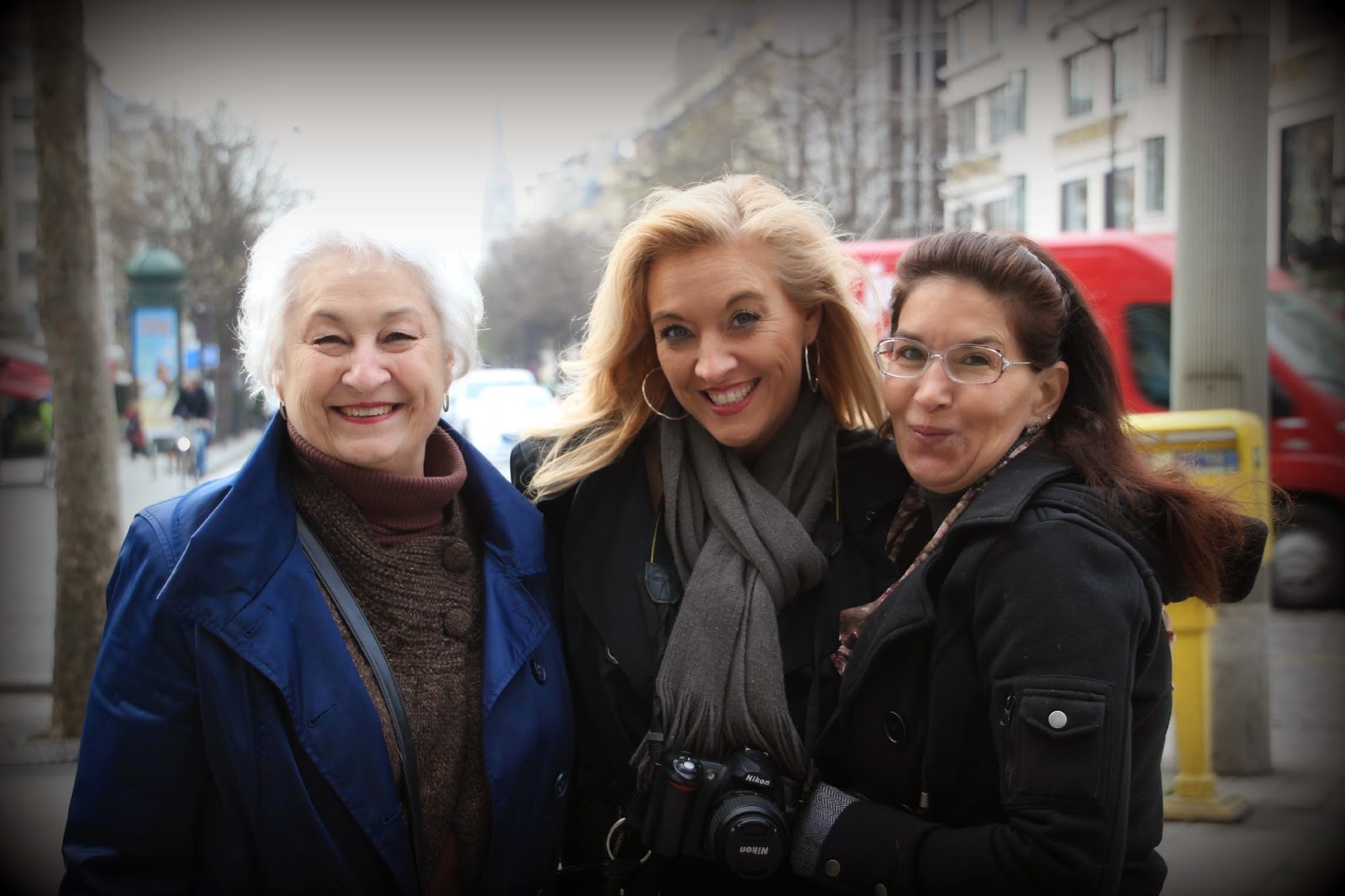 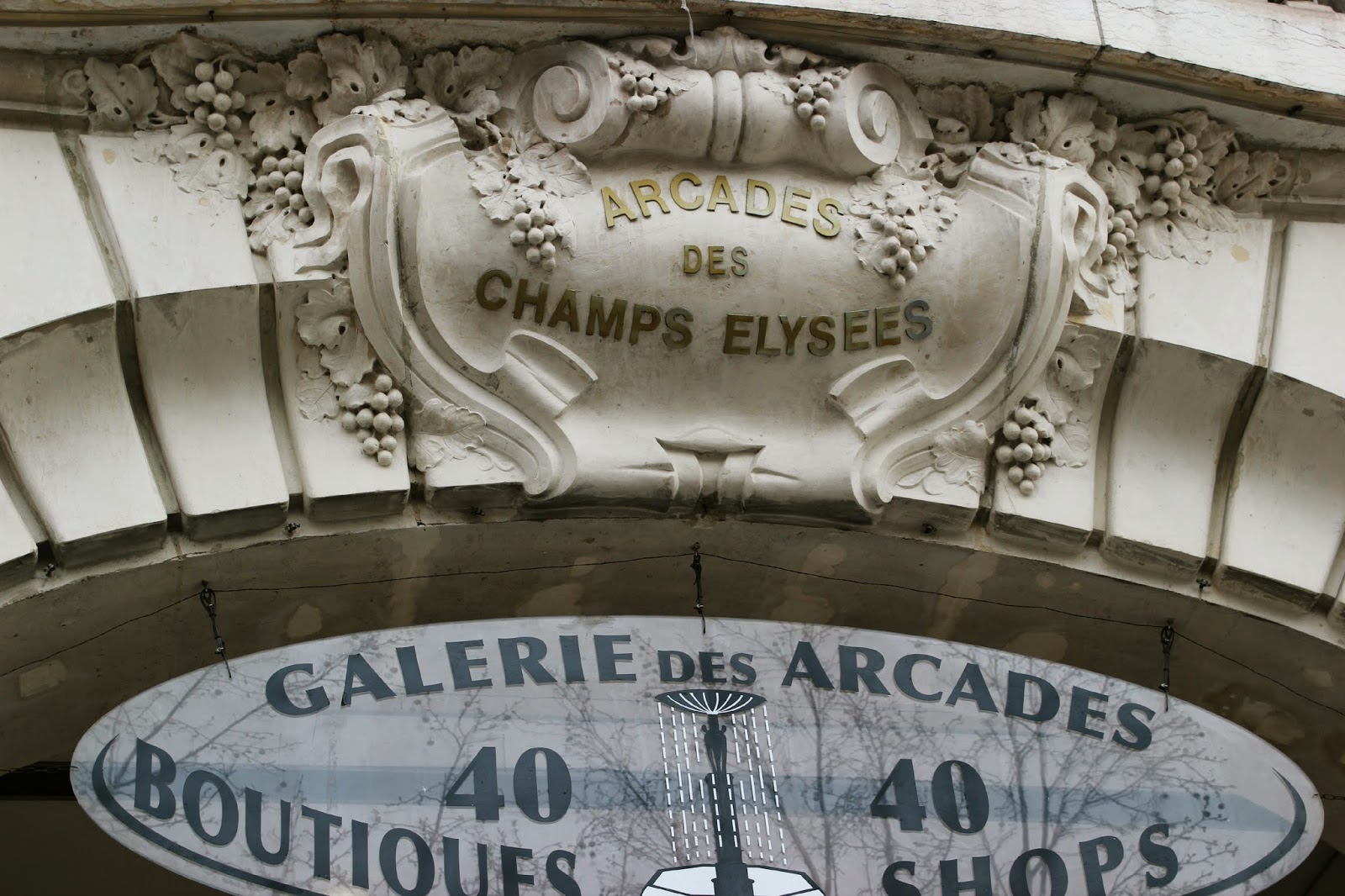 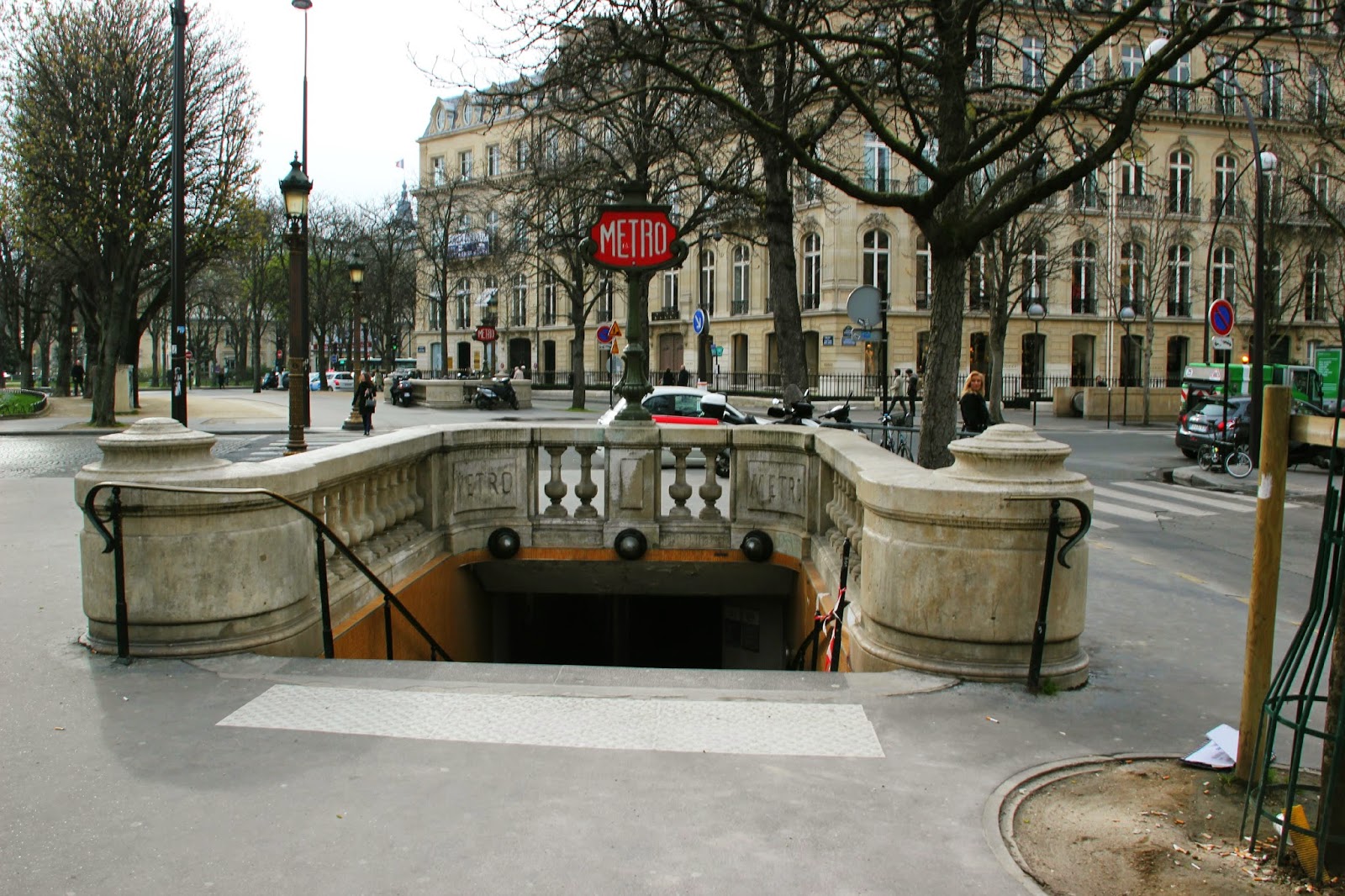 Midway through our journey to the Eiffel Tower, we decided to stop for another hot drink. Walking was keeping most of us fairly warm but my older sister (who probably needs a name on the blog at this point...hmmm...let's call her Midge) had become uncomfortably chilled. A light rain was also falling and we thought that it might pass over if we waited.

So, in another small café, we ordered cappuccinos and hot tea and planned our attack for the remainder of the day. We knew that we wouldn't spend that much time at the Eiffel Tower since we didn't plan on taking the elevator trip to the top, so we had a few hours to kill before needing to get ready for The Moulin Rouge, which was scheduled for later that evening.

From the street in front of the café, we could see the very top of Notre Dame, and we decided to make the trek there after the tower. With that plan in mind, we finished our drinks and continued on. 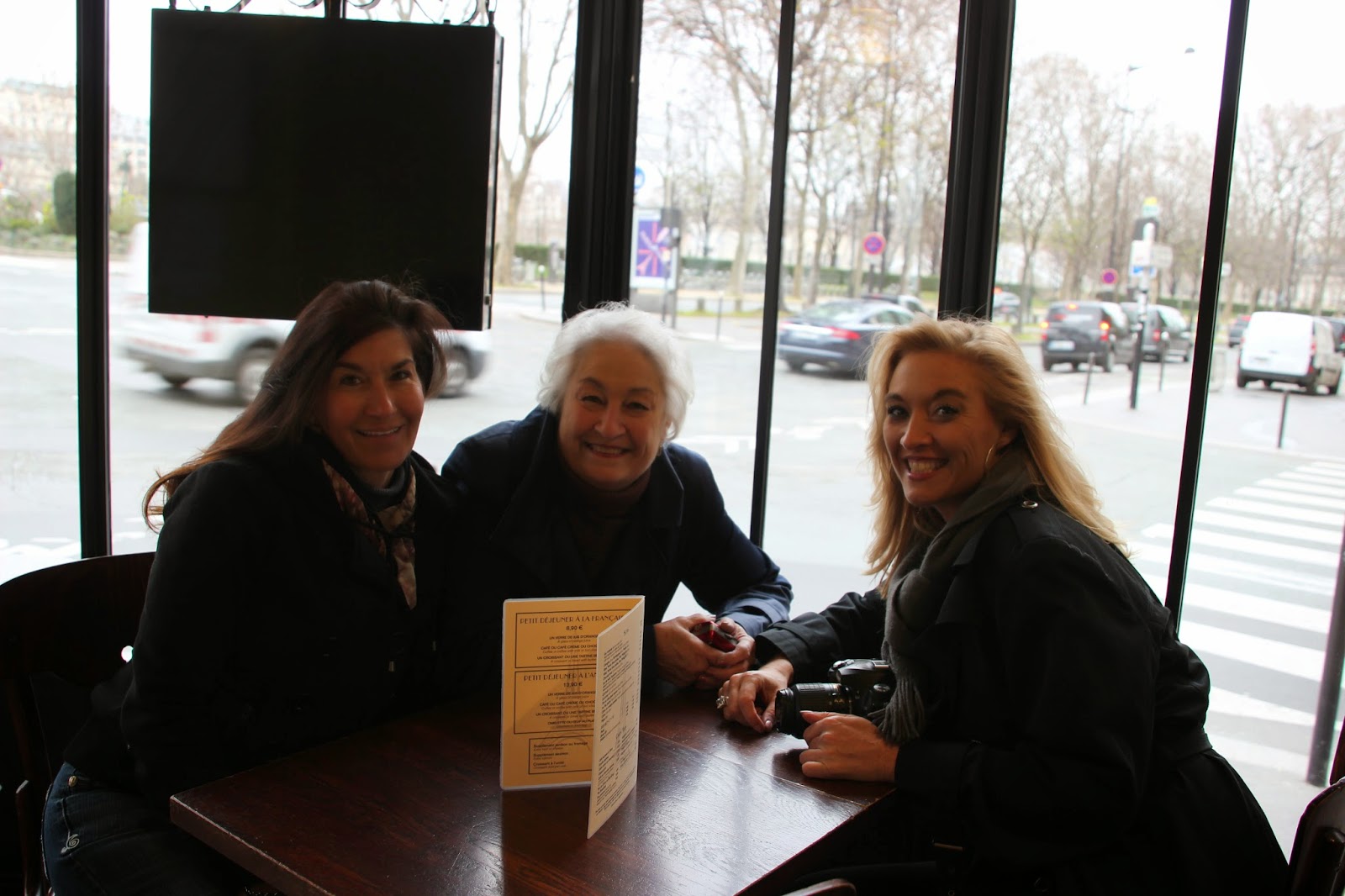 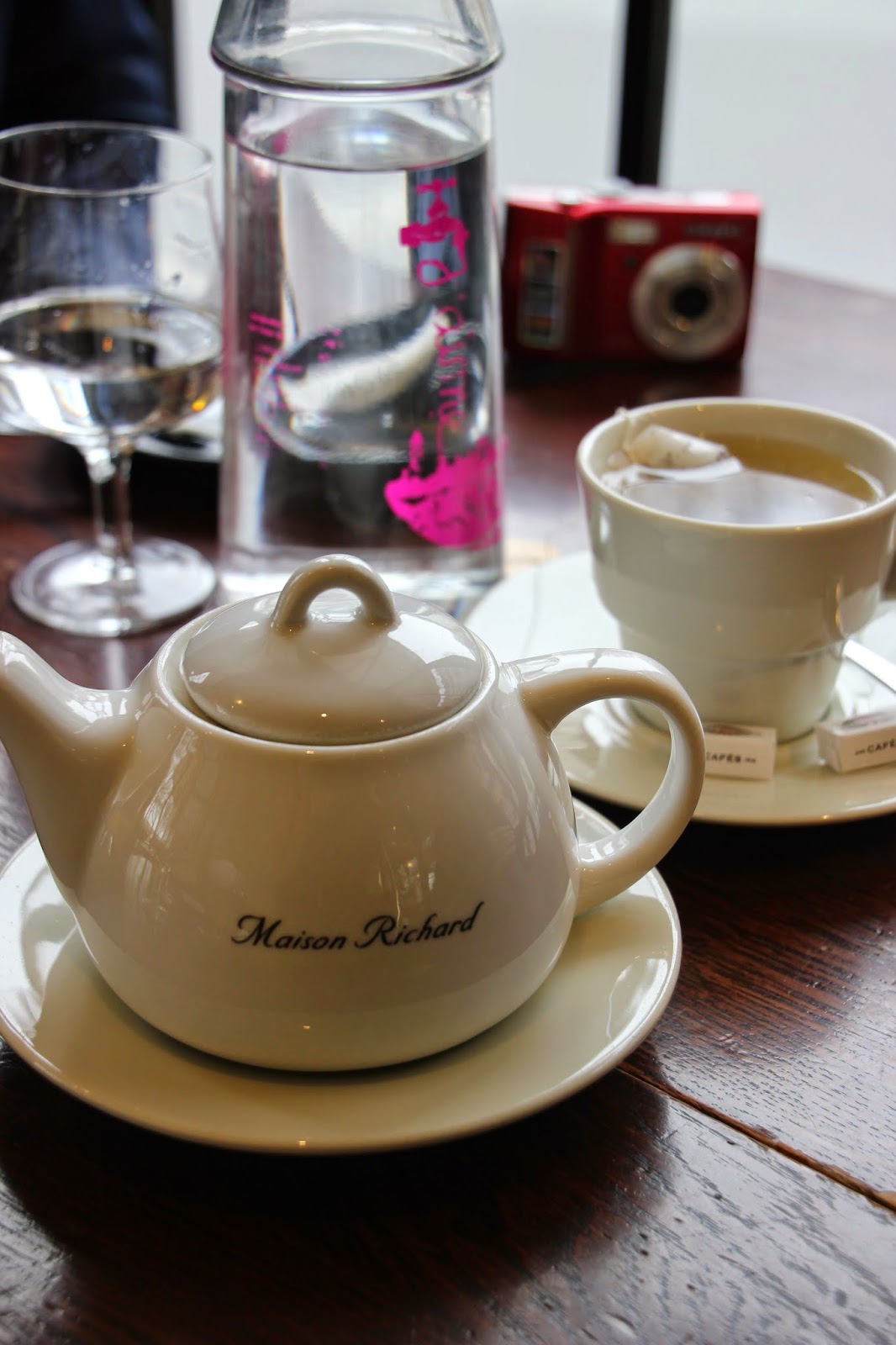 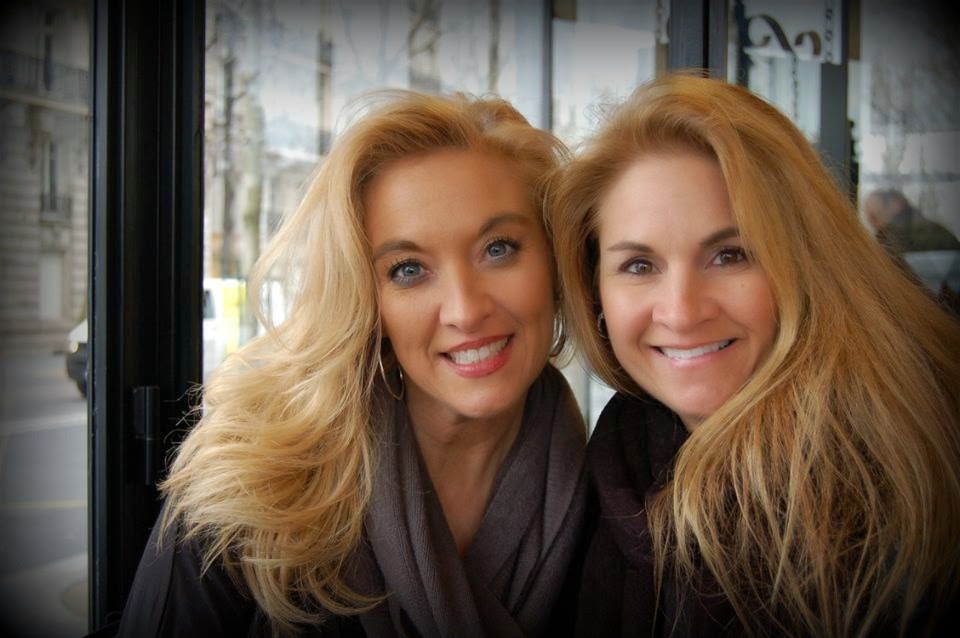 Although the rain had lightened, we still required the use of our umbrellas, which, in my opinion, only added to the ambiance of the experience-Paris in Springtime, people! 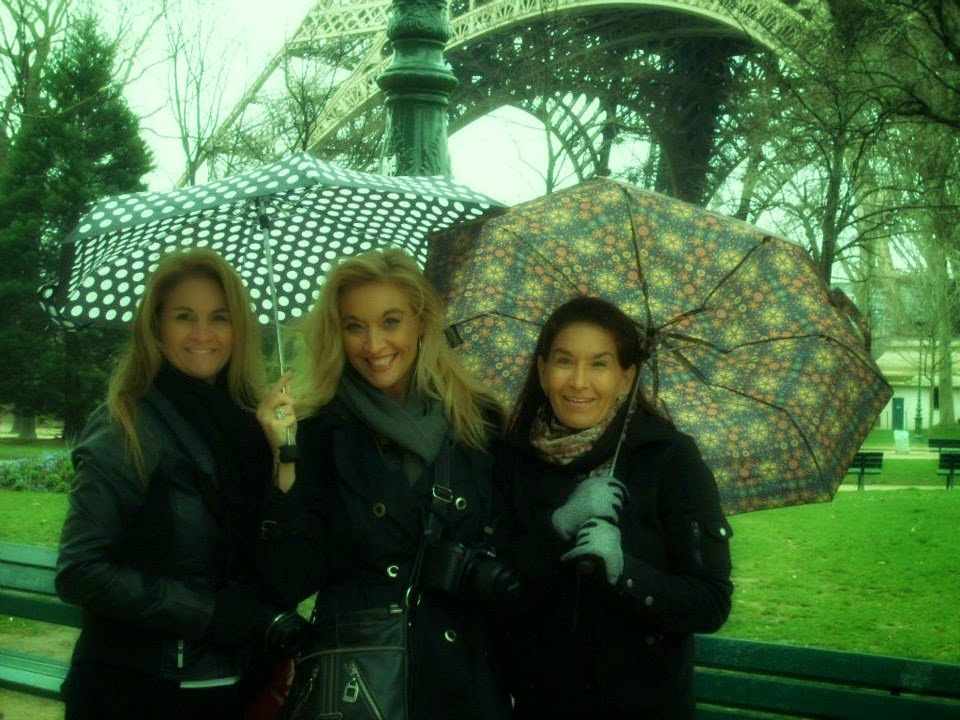 The first glimpse of the Eiffel Tower was impressive, and, it just became more so the closer we got. Actually standing under the Tower was as surreal an experience as I have ever had. I was actually in Paris. At the Eiffel Tower! Who would have ever thought? 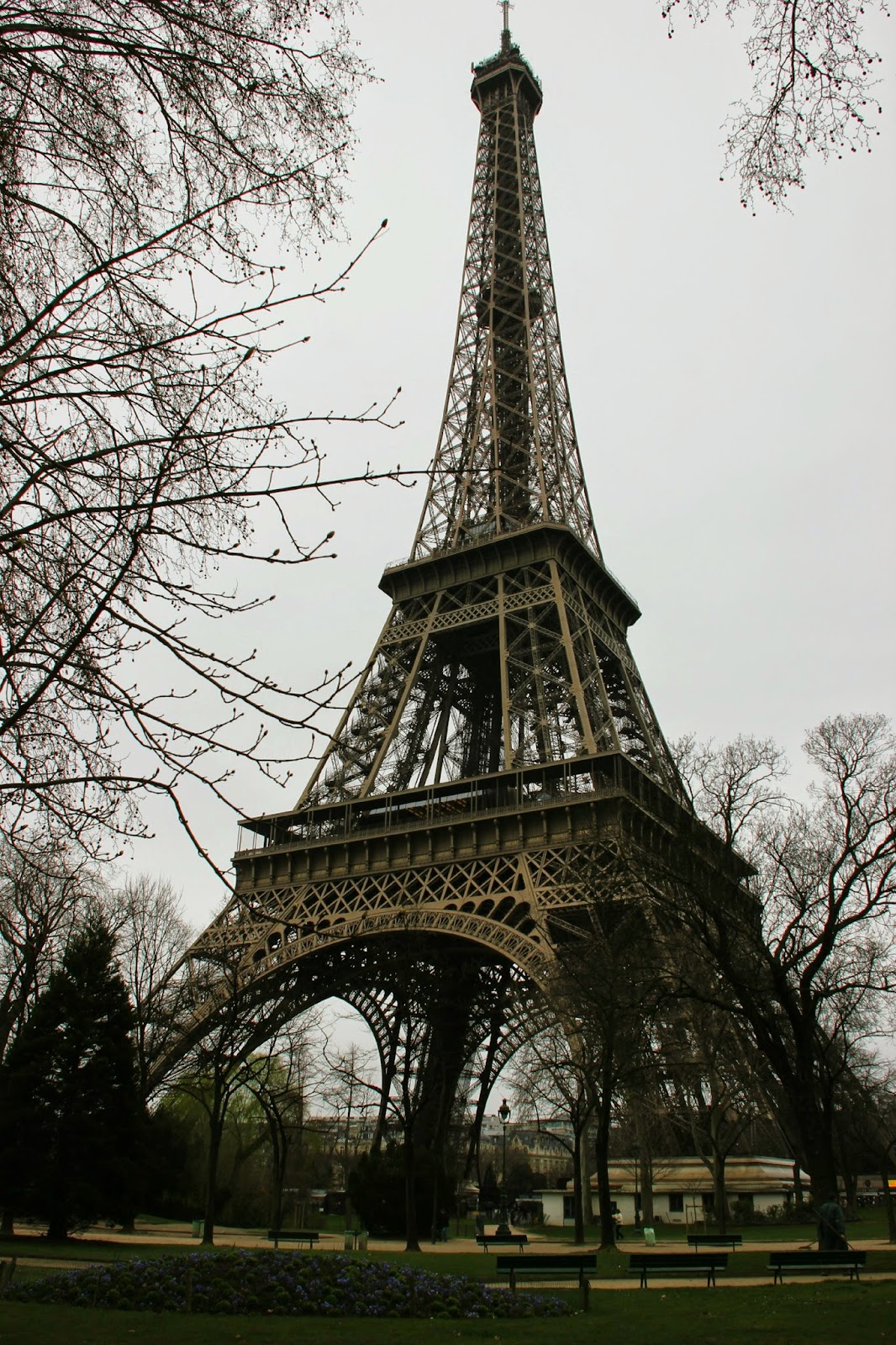 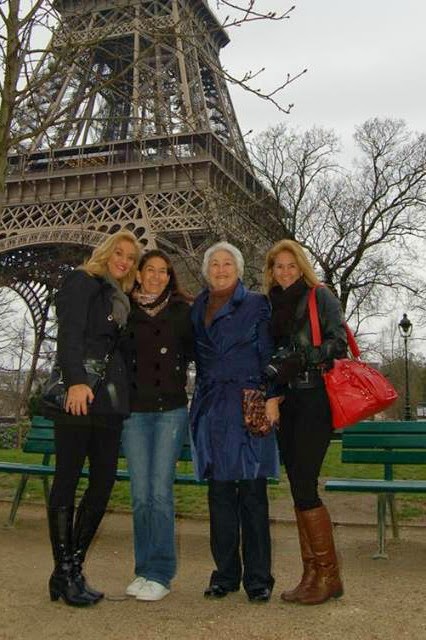 Unfortunately, the iconic carousel in the park adjacent to the Tower was not running, but, I had a chance to snap a few quick pictures of it before Midge, having decided that the weather was not her friend and that a walk to Notre Dame was no longer an option, flung herself in the path of a taxi, thereby engaging its' services in transporting us to the cathedral. 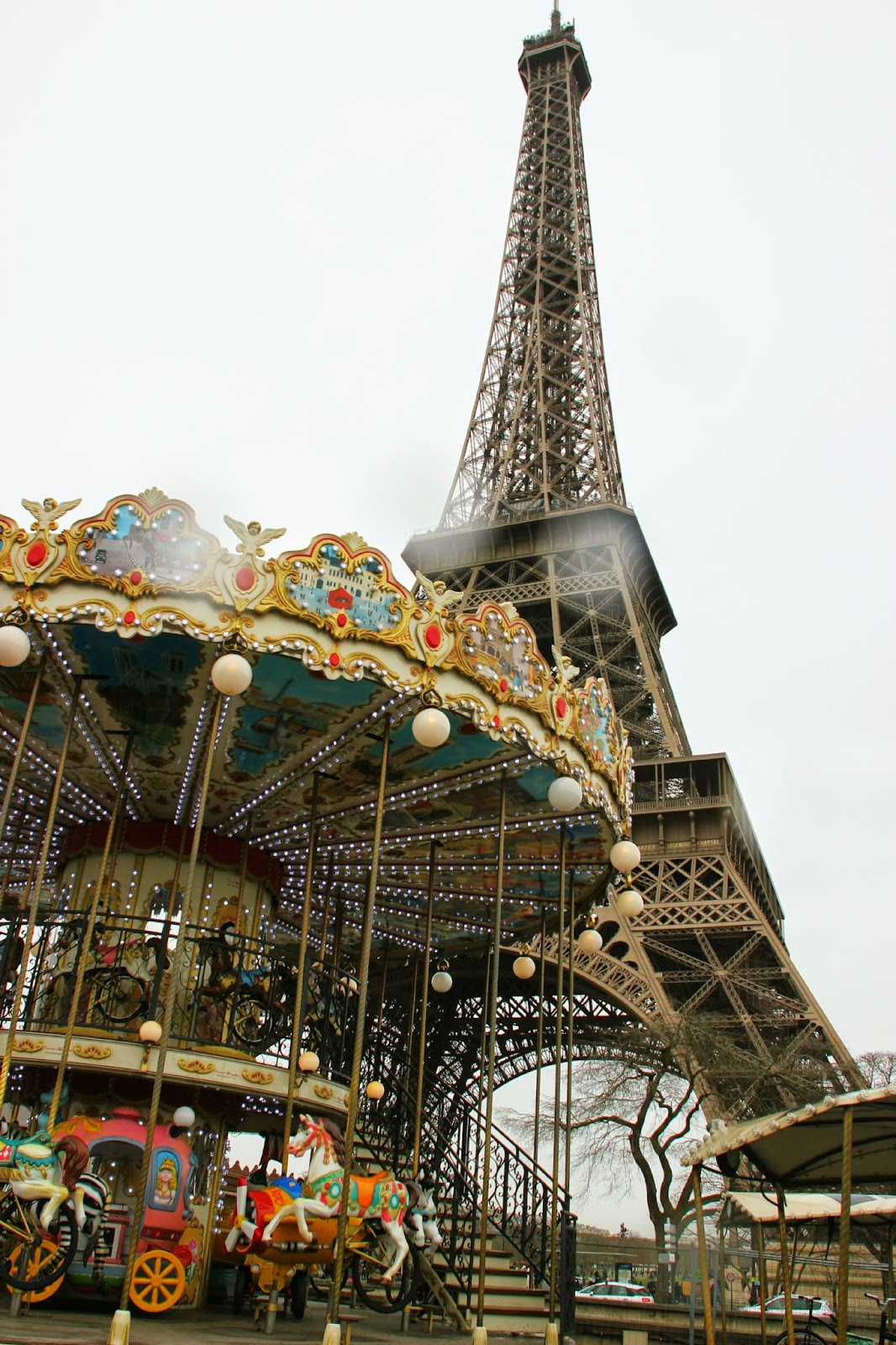 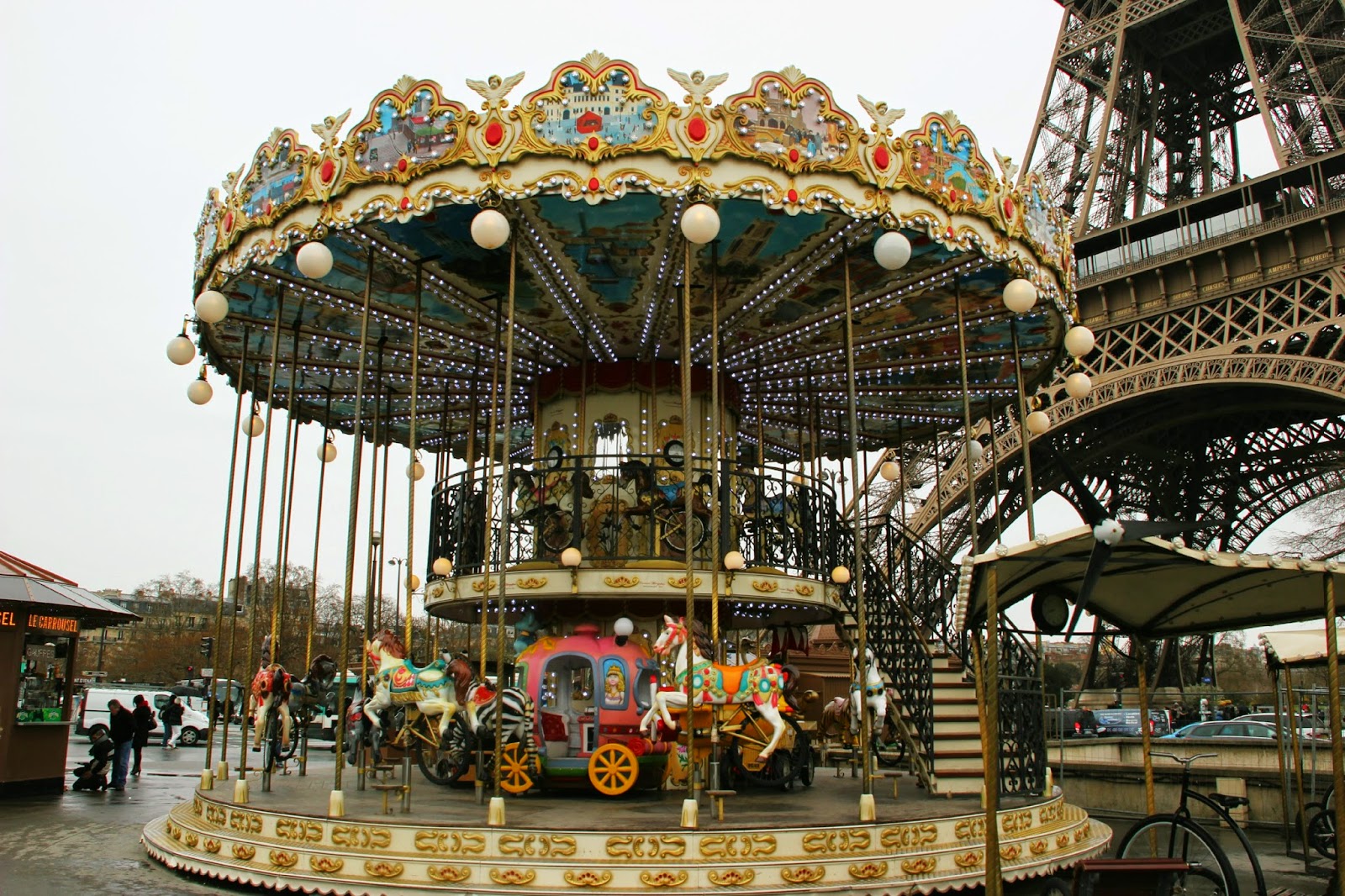 Thus, Midge became our default taxi-hailer for the remainder of the trip.

Up next: Notre Dame, The Moulin Rouge, and, Barbie takes an unexpected tumble.

P.S.
If you made it all the way through this, congratulations! You earned an out the next time Great Aunt Erma requests a bunion massage. Well done!
Posted by Chelle at 12:47 PM