After our big night out at The Moulin Rouge, we settled back in at the hotel. I tried to fall asleep, but, the seven hour difference in time (it became an eight hour difference a couple of days later, when Paris started it's Daylight Savings Time) foiled my attempts; I finally fell asleep a couple of hours before I had to get up for our day at The Louvre. Thankfully, the museum was entertaining enough to keep me awake.

We arrived early, in order to secure our place in line to purchase tickets. It was a gorgeous day, very sunny and pleasantly warm, so, the wait outside was not uncomfortable in the least, which, Midge certainly appreciated, given her dismay at the cooler temperatures from our day on the Champs Elysees. 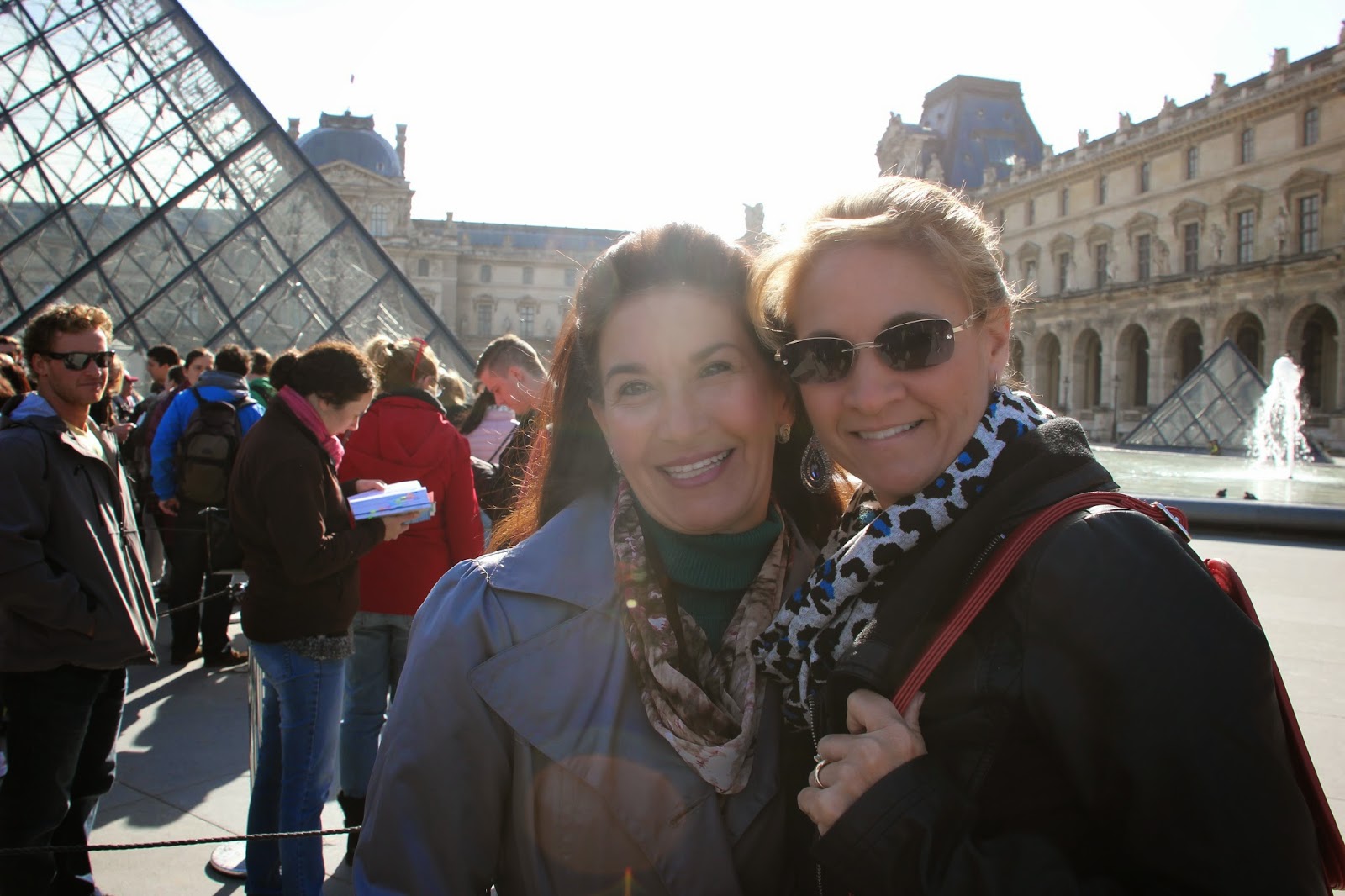 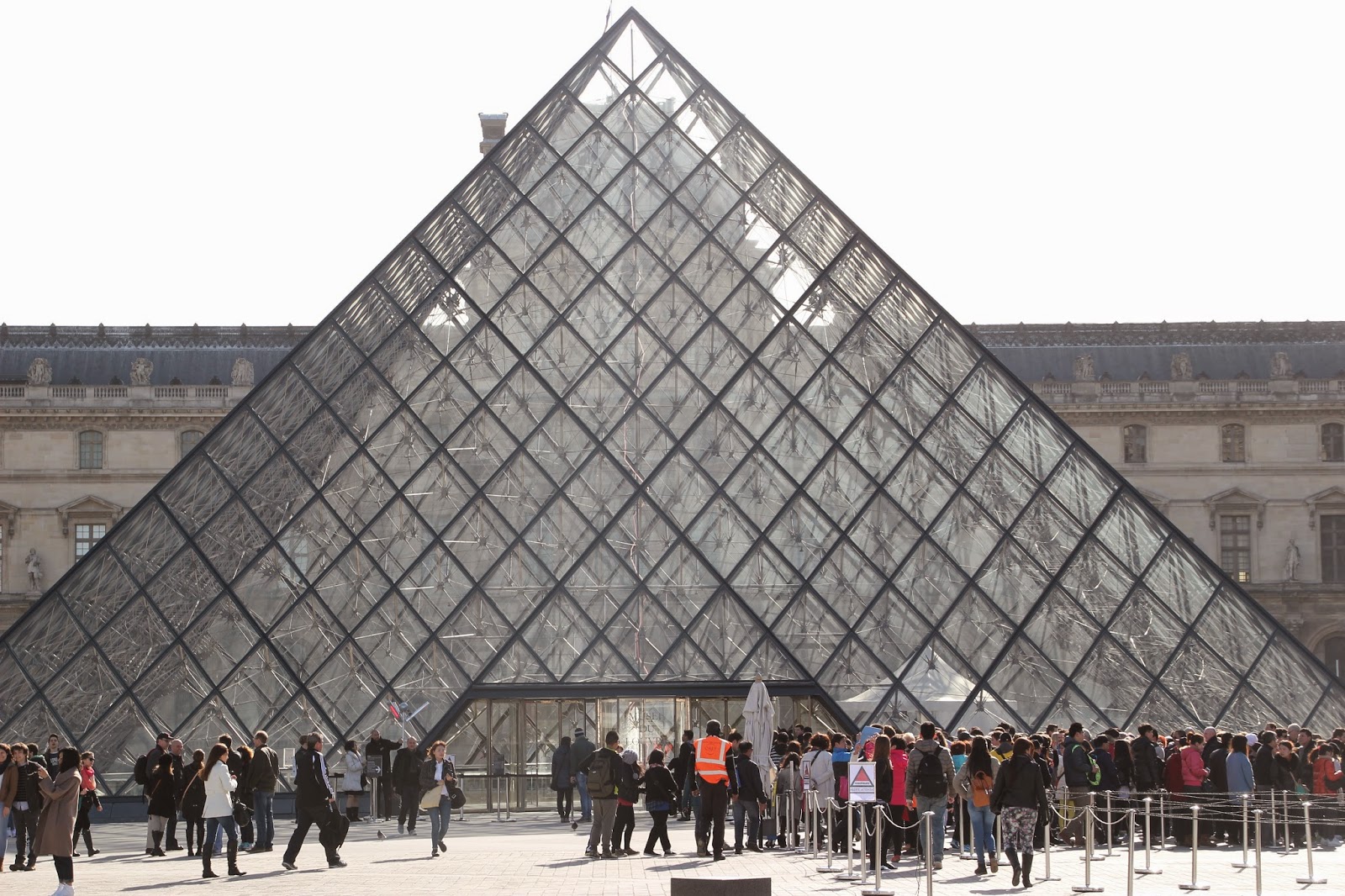 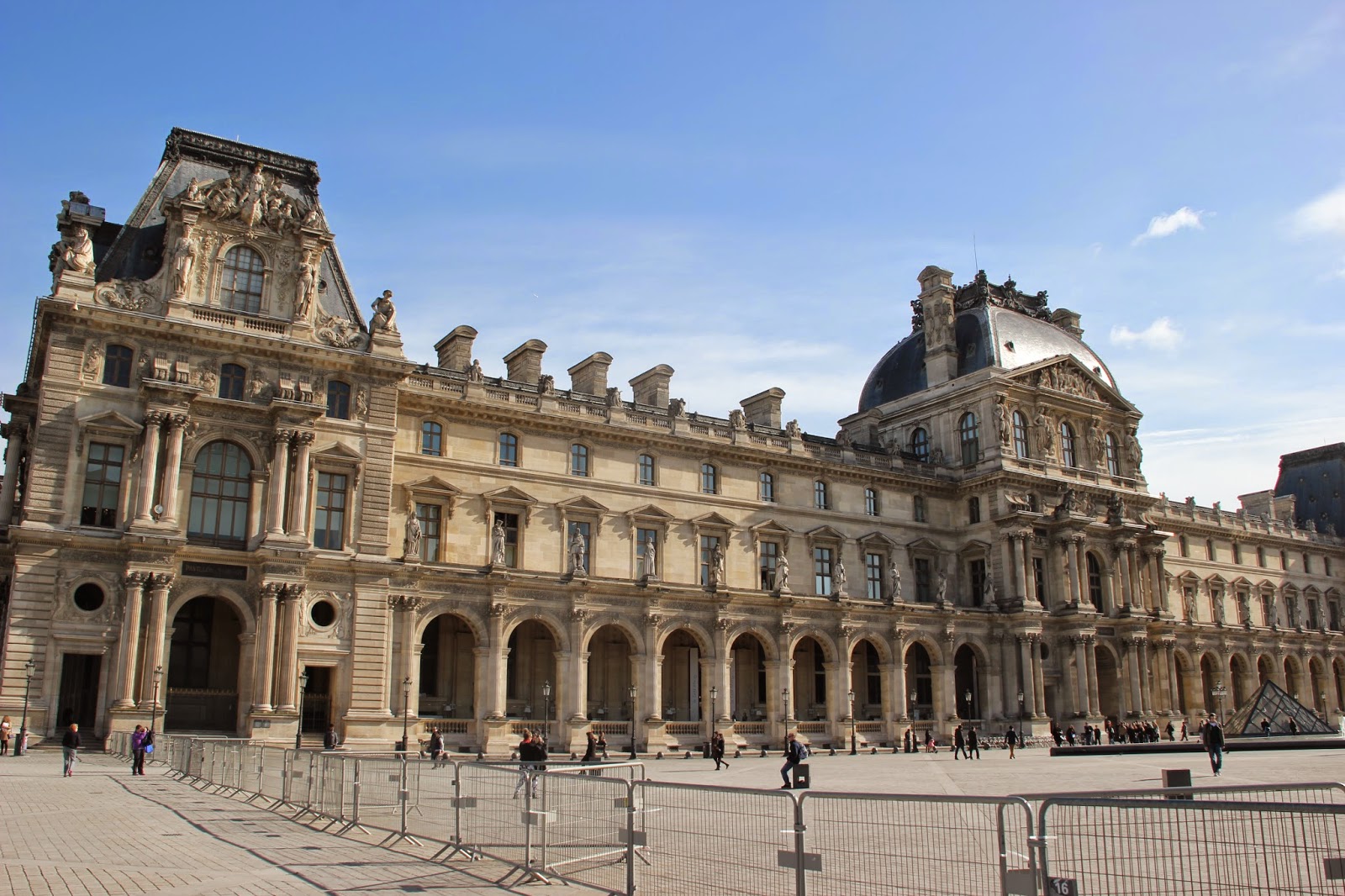 Once inside the museum, we were blown away by the sheer size of the space, not to mention the volume of artwork and artifacts housed within. It would have been easy to lose ourselves for hours in the galleries, but, Barbie was on a mission to find The Mona Lisa, which was on her Paris Bucket List, so; we headed to the Denon Wing in search of the famous painting before doing anything else.

Despite being surrounded by literally thousands of important works of art, The Mona Lisa was the only painting to attract a standing room only crowd, with tourists pushing to get to the front of the pack for a closer look. We eventually made our way to the front of the velvet ropes, or, as close as I felt the need to get, anyway, and... 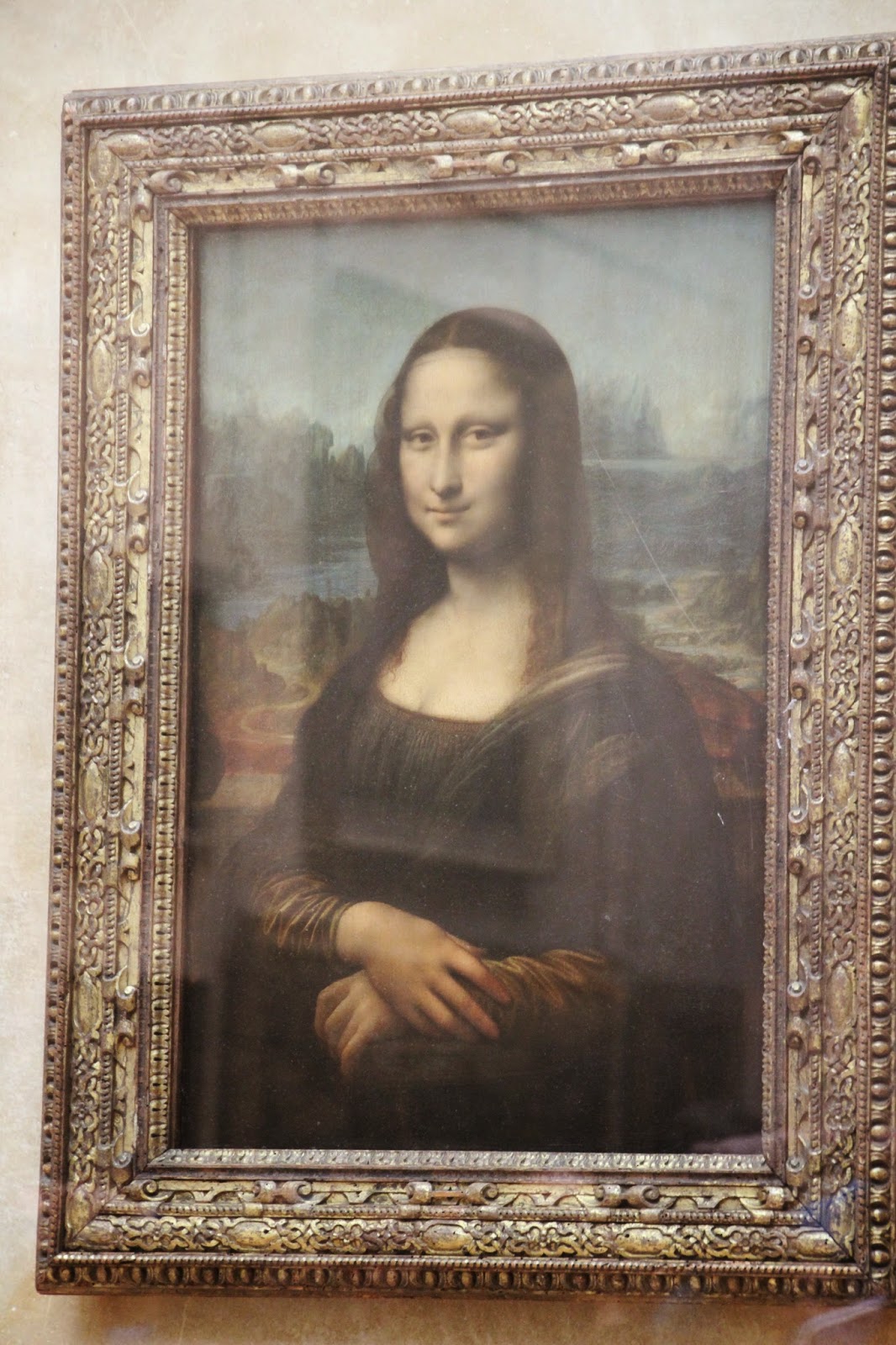 ...I can say that I saw The Mona Lisa in The Louvre in Paris.

Happily, I can also say that I saw a number of other stunning works of art, including paintings, sculptures, pottery, crystal, the French Crown Jewels, and tapestries, galore. My favorite wing of the museum was the Sully Wing, which is the oldest part of the museum, dating back to when the Louvre was still used as a royal residence. 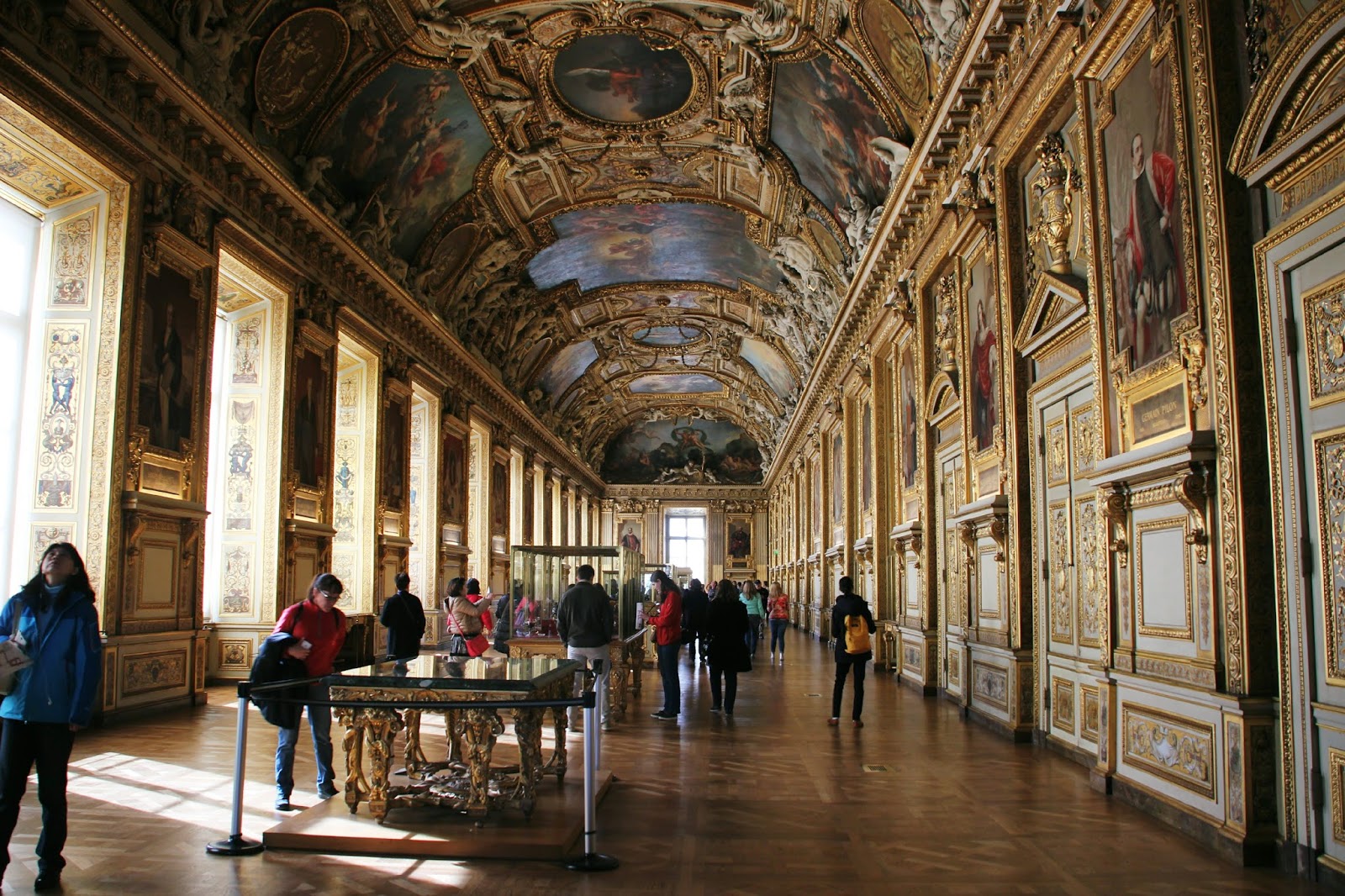 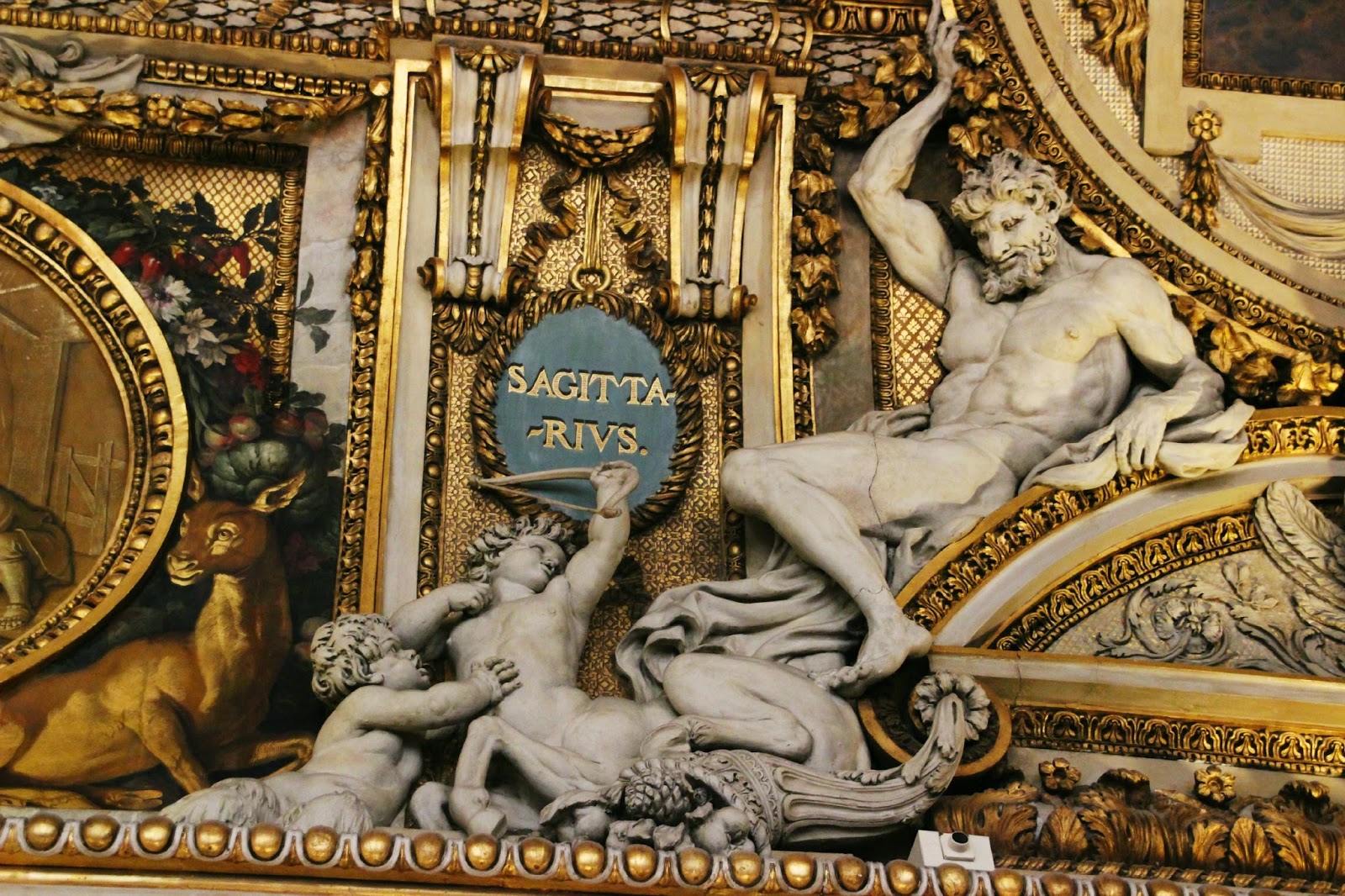 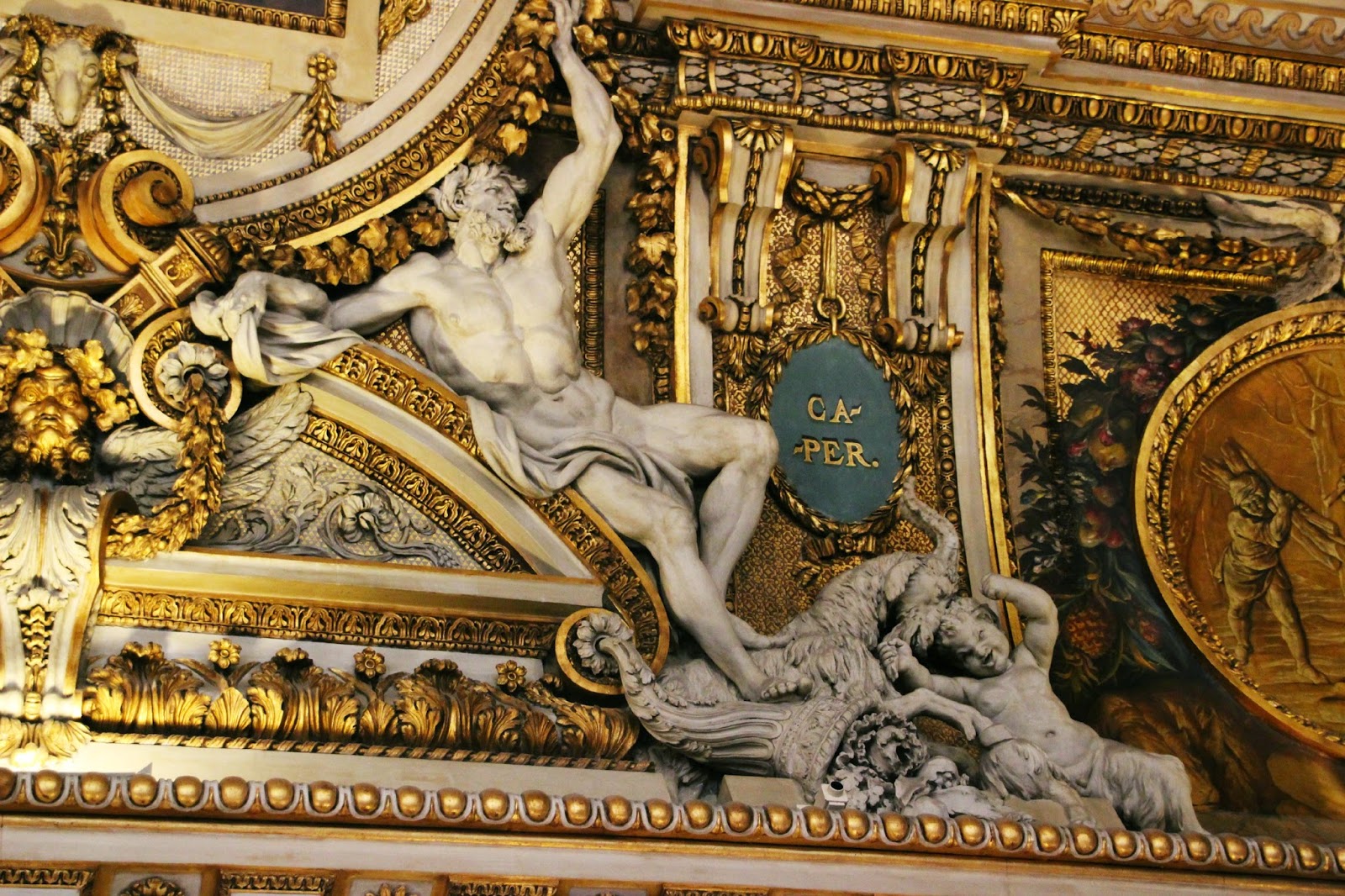 The intricate paintings on the ceiling and artwork on the ceiling moldings were phenomenal; I especially liked the artwork depicting the months of the year, as related to astrology. Not because I am a nut about horoscopes or anything but, because they were unique and beautiful. Also, slightly terrifying; some of those cherubs look like the predecessor to the Chucky doll. 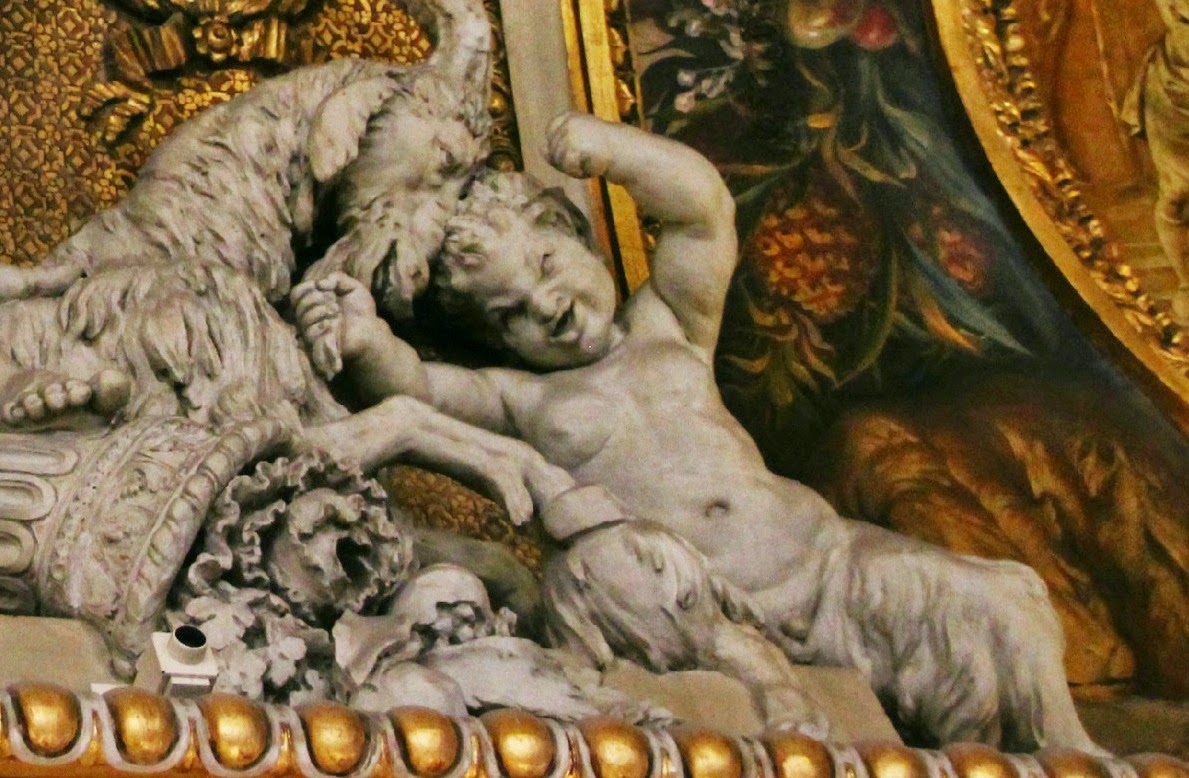 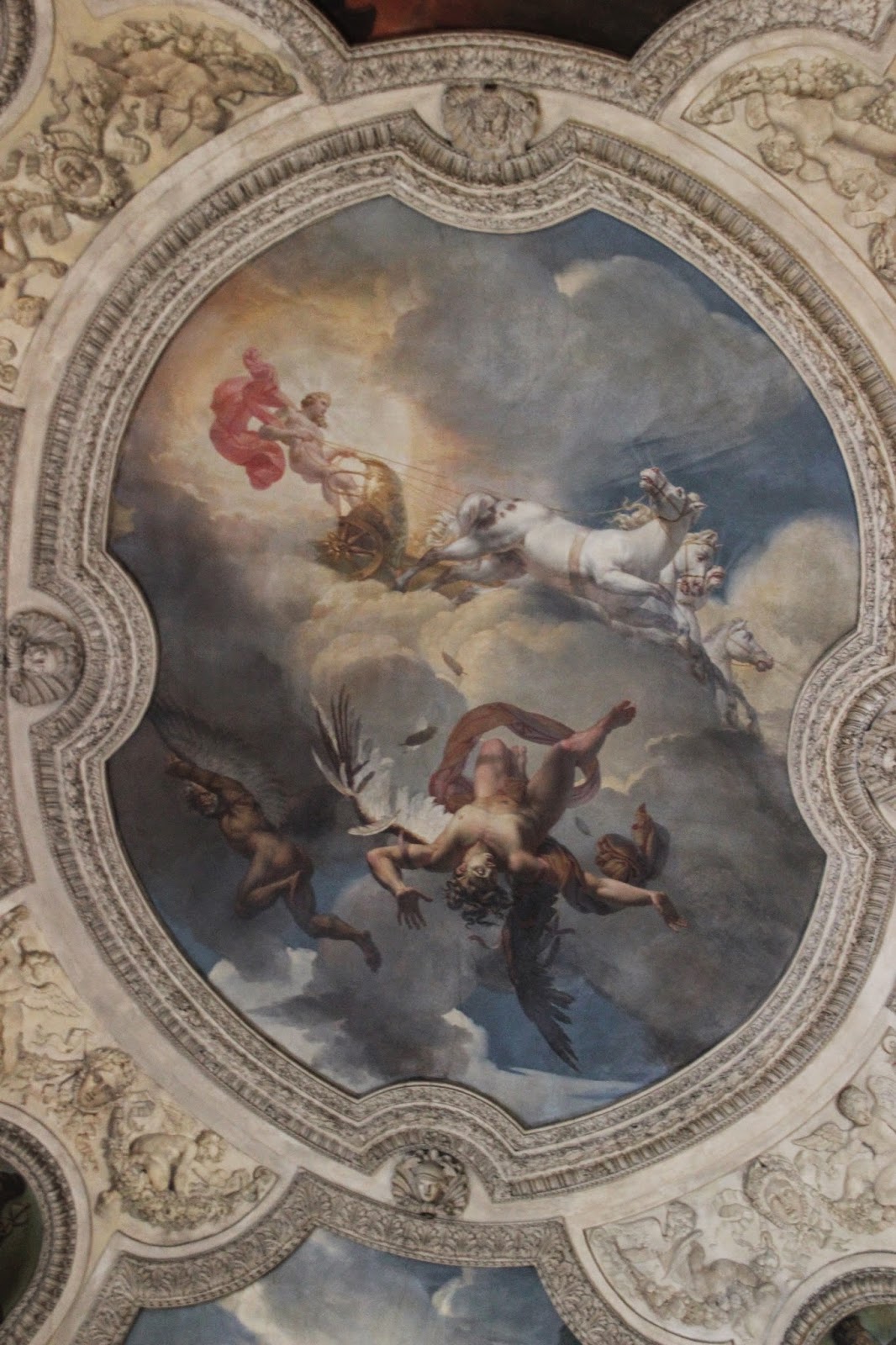 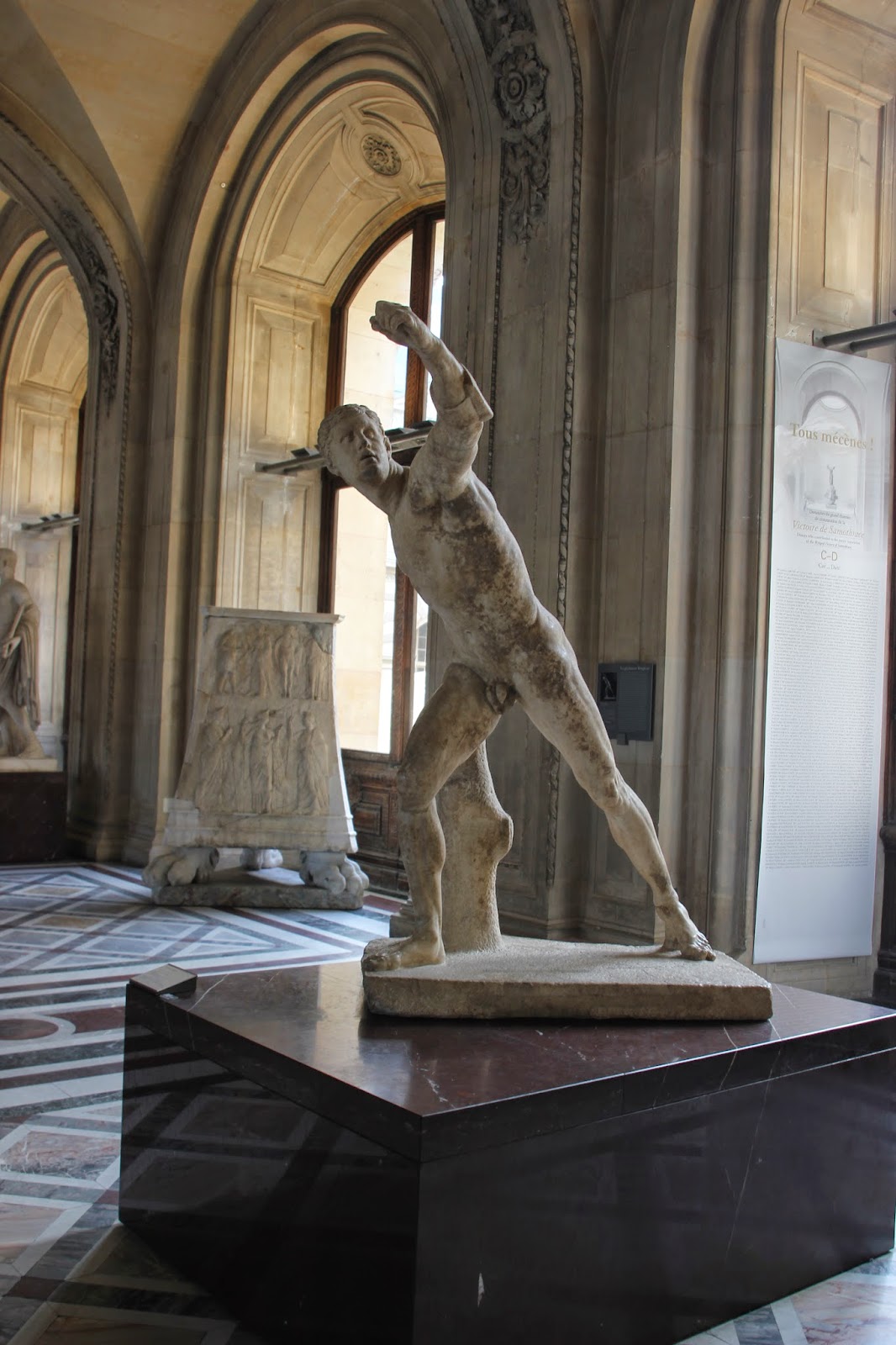 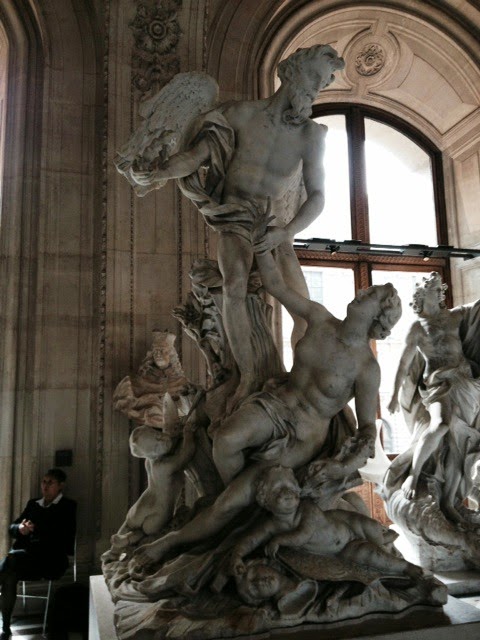 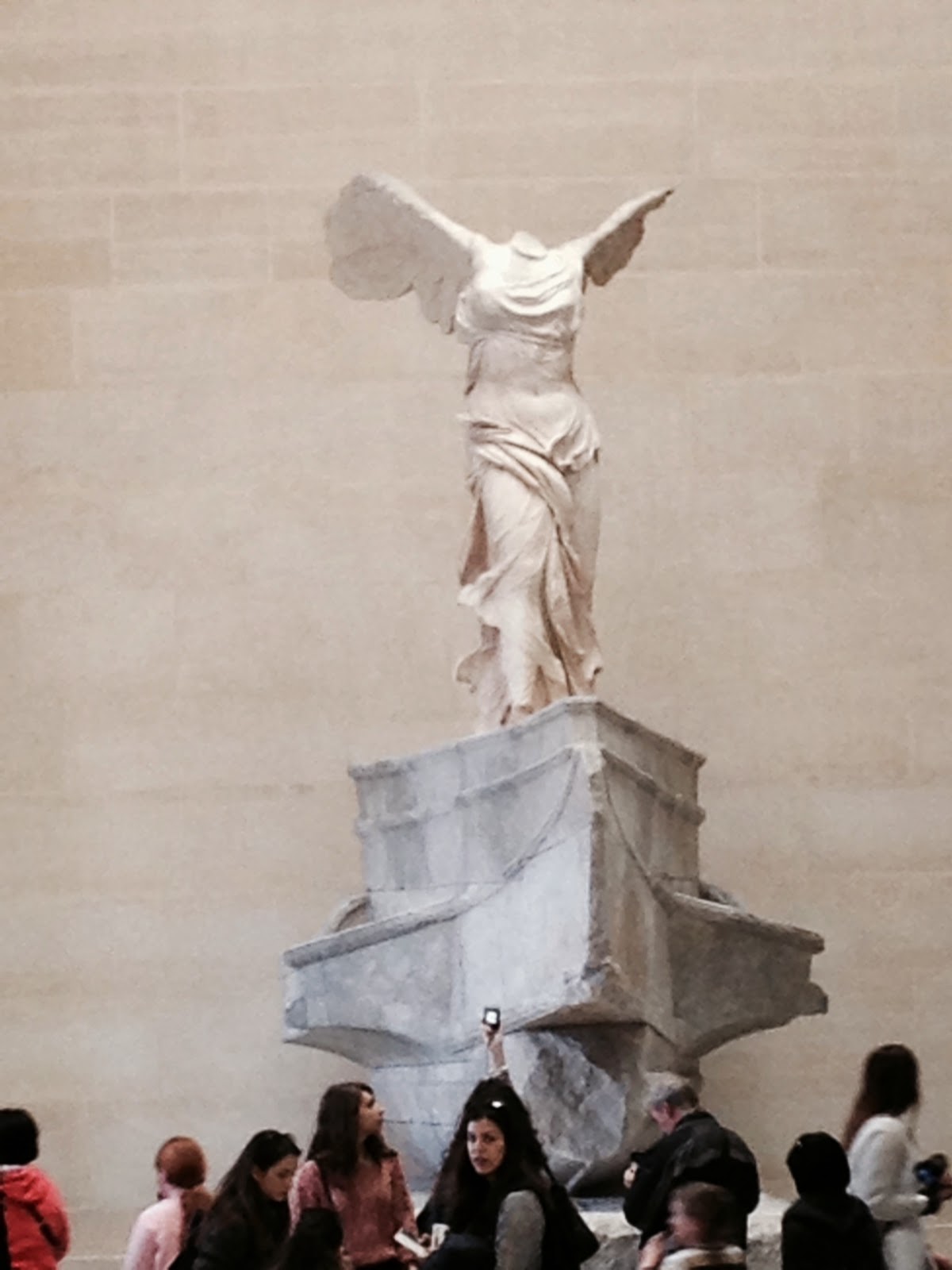 We didn't have nearly enough time to fully explore the museum-that would have taken days-but I did get to see the Venus de Milo, the Winged Victory of Samothrace, Psyche Revived by Cupid's Kiss, the Borghese Gladiator, and, this guy... 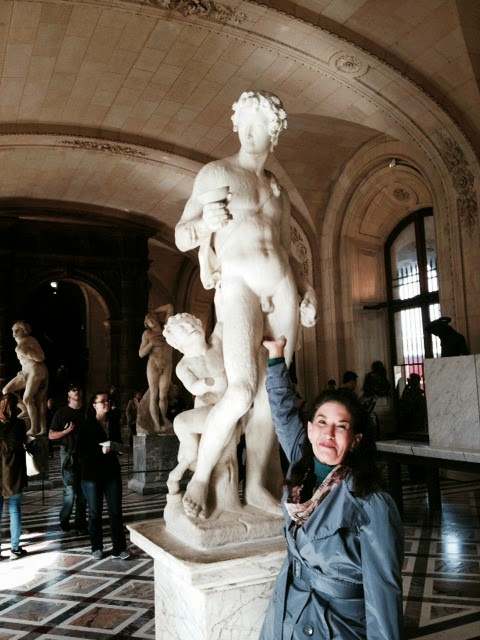 I'm not sure what it's called; I would have gotten a closer look at the placard had Midge not taken it upon herself to molest the poor thing. As it was, I quickly retreated in shame lest someone label me a tacky American.

Not long after that picture was snapped, we left the museum to catch a ride in an open-air taxi, during which we were treated to such scintillating sights as the hotel where Princess Diana and Dodi Fayed spent their last night on earth. Earlier in the week, a cab driver had pointed out the tunnel in which the accident that claimed their lives occurred. Apparently, Parisians are still haunted by the tragedy.

Speaking of accidents, it was on this day in Paris that the taxi we were riding in was rear-ended when it pulled out of traffic to illegally discharge us. I shared that picture once before, but, some things are just to good not to share, so here it is again. 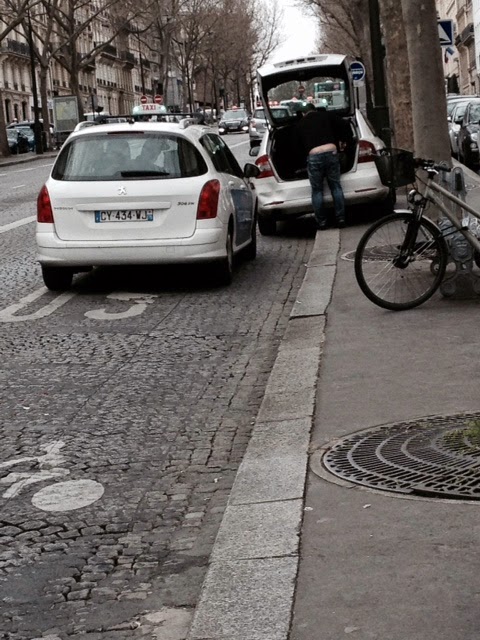 I'm thinking of having it framed. Maybe, someday, it too, can hang in a famous museum. After all, Mona Lisa was once just some homely girl who sat for a painting.

Next time: the story behind the Lover's Bridge. 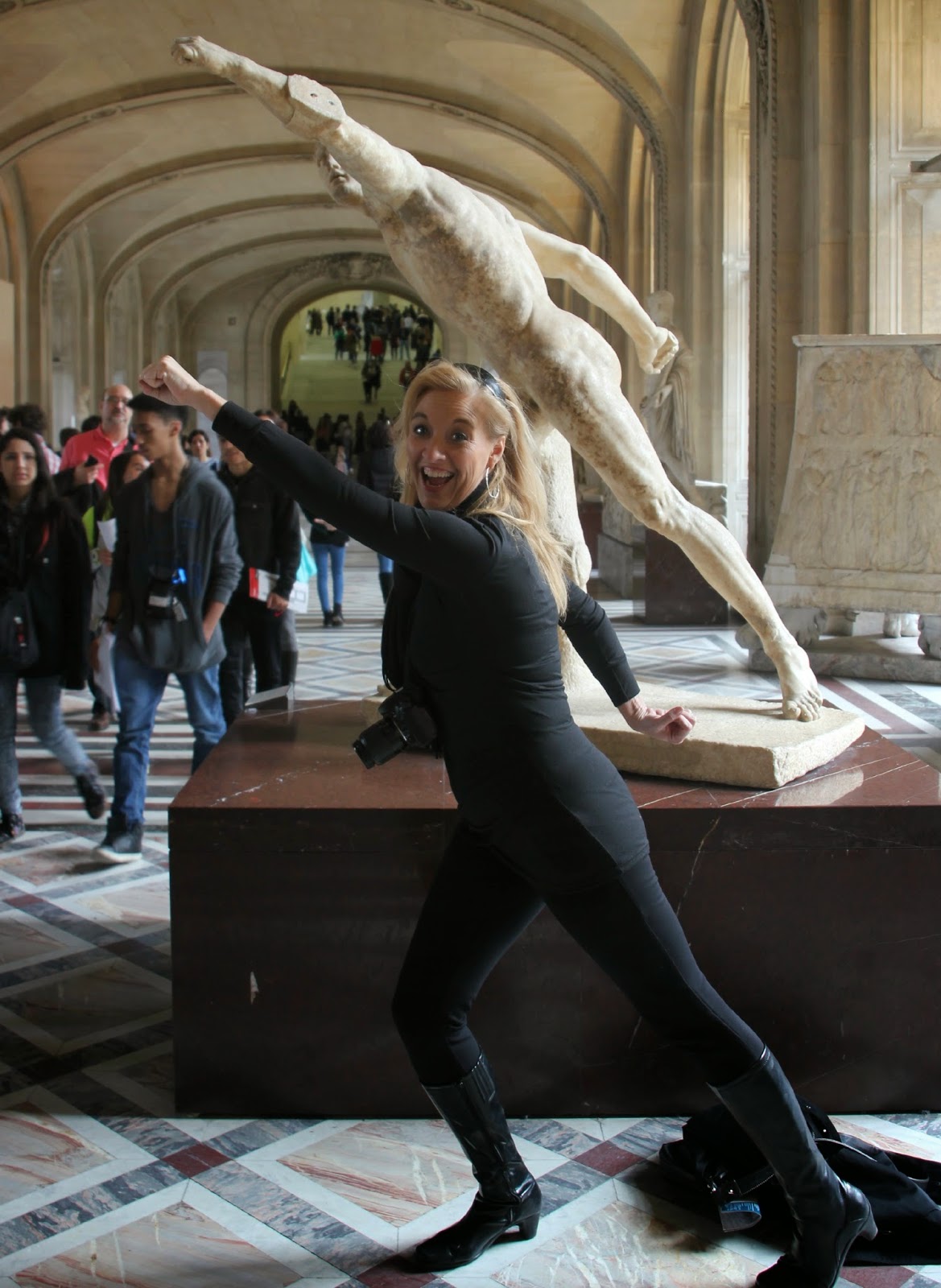 Seriously, I can't take them anywhere.