A week and a half ago, we noticed that Rowdie was favoring his front leg. At first, it was just a slight limp and we honestly thought that it was the onset of arthritis, since he already struggles with that in one of his hips. Unfortunately, the limp became more pronounced and he started to show obvious signs of pain in his left shoulder.

Hugh took him to the vet, where an x-ray showed no breaks or fractures; the assumption is that he has a torn bicep (no idea how that happened). After a cold laser treatment on the affected area, they were sent home with pain killers, anti-inflammatory meds, and instructions to bring him back every few days for additional cold laser treatments (the initial one seemed to offer him some relief).

Since then, we have seen no real improvement, and, after an unfortunate event wherein Rowdie took a nasty spill off the porch when he gave chase to a stray cat attempting to abscond with the food from his kennel (there was literally nothing we could have done to stop him, he still weighs nearly 100 pounds and he was a dog on a mission), he may be even worse.

Today, the Cub and I are taking him back to the vet for another x-ray. I'm hopeful that he just re-inflamed the original injury and didn't incur a new one, or, that they didn't miss something on the initial x-ray, but, one never knows.

All I know is that my dog is not his usual rowdy self and I am worried. I was already concerned about how he was going to handle the Man-Cub's absence once he jets off to college and now, after seeing his depression at not feeling well, I am doubly concerned.

If you are the praying type, please say one for this sweet, goofy boy. He's a joy in our lives and we really need him to feel better. 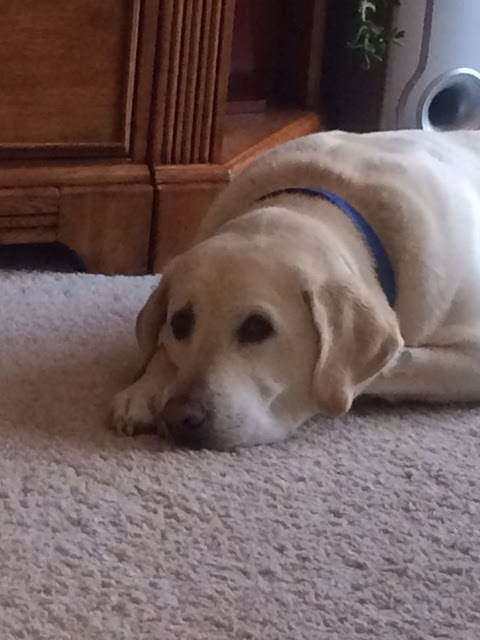