In Which Mother Nature Actually Cooperated

Our drive to Denver yesterday actually ended up being pleasant; I was as shocked as you are.

The predicted snowstorm failed to materialize, and, rather than trekking through the white stuff, we had a smattering of sprinkles, a little bit of fog, and, mostly sunny skies. It was a great way to travel. We also ended up arriving in Denver two hours ahead of schedule (again, I am as shocked as you are) which meant that we had ample opportunity to explore the neighborhood in which the restaurant where the reception was being held was located.

We spent the majority of the time exploring a used sporting goods store and eating lunch, but, I can tell you that the two-block-long stretch of shops and restaurants, sandwiched between older, established neighborhoods, was adorable, and, a flashback to when everything you needed was within walking distance of your home. I would love to live in a community like that again.

Oh, wait, I do. Petticoat Junction is just not nearly as picturesque, trendy, or upwardly mobile. And, as often happens, I digress.

After lunch, we moved right into the lounge area of the restaurant, where the staff from HPU had set up light refreshments and swag. The Cub was thrilled with his new HPU hat, pennant, bag tag, and Shark emblem. He was also tickled with the kukui nut lei that the Dean of Student Admissions placed around his neck upon greeting him. 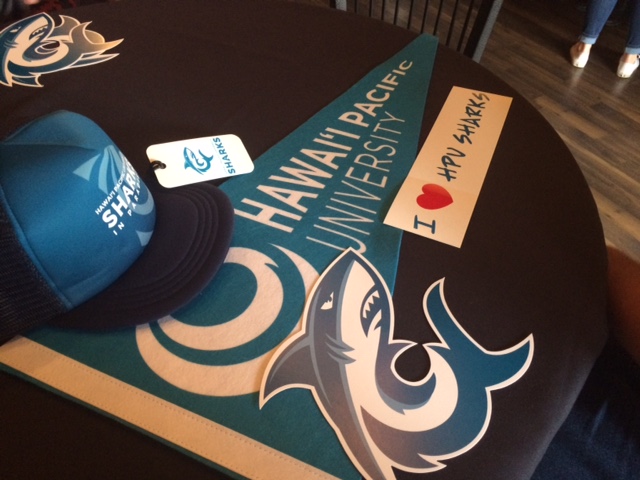 Hugh and I were thrilled with the information that we were given over the next couple of hours, including practical things like the fact that we can order the Cub's dorm room items from Bed, Bath & Beyond and pick them up at the store on the island, no need to ship ourselves; that actually made me breathe a sigh of relief because I wasn't entirely certain how I was going to outfit an entire room in the one day that we have with the Cub when we drop him off at school.

I also appreciated the practical information about which stores are available on the island and how the Cub was going to get around without a car (quite easily, according to the Dean of Student Admissions, who told us that he lives off campus and has never had a car, or, a problem caused by not having one).

The Dean of Student Admissions also offered to take us on a tour of the school and the island when we visit in June, which, I thought was really nice. The Cub had met the Dean at the college fair that he attended in Aspen earlier this fall, and, apparently they hit it off quite well because the Dean remembered the Cub by name when we first saw him, and, he and the Cub chatted for quite some time after the informational presentation was complete.

I tried to encourage the Cub to introduce himself to some of the other kids who were at the reception (one other boy, the rest were girls, two of whom are going to be studying Marine Biology as well and, who were, according to what the Cub texted to Mikey, "hot"), but his shyness kicked in and the best that he was able to do was an awkward introduction to one of the ("hot") girls, who apparently aslo suffers from terminal shyness (it was actually kind of adorable).

After the reception, we stopped briefly at a shopping center to pick up a hat for the Cub before hitting the road for home. By the time we pulled into the garage, we had put in a fifteen hour travel day and we were pretty tired. It was worth it, though. I feel a lot better about the prospect of sending my kid 3000 miles over the ocean. I'm excited for the experiences that he is going to have and I am really looking forward to hearing about him meeting people from all parts of the world and from different cultures.

He's going to have to get over that shyness thing, though. Fingers crossed.
Posted by Chelle at 9:42 AM