30 Days of Gratitude, Days Twenty-Three and Twenty-Four, and, a SURPRISE!

Several weeks ago, Hugh casually informed me that we would be attending a non-tradition Thanksgiving dinner at the fire station the day after Thanksgiving and asked that I prepare a seven-layer dip as our contribution to the feast.

At the time, I thought it was odd that we would be attending a function at the firehouse, since Hugh had only recently retired from his position on the Fire Board, but, his dad also retired about a hundred years ago, yet he and Emily still attend events on occasion, so, I didn't read too much into it. I wasn't thrilled with the timing, though; I set the days after Thanksgiving aside to make my house look like the North Pole threw up all over it, and, every second counts. Leaving for even an hour upsets my agenda, if you know what I mean.

But, I'm a team player, so, last night I grudgingly threw together a seven-layer dip, slapped some lipstick on, and accompanied Hugh to the firehouse, where... 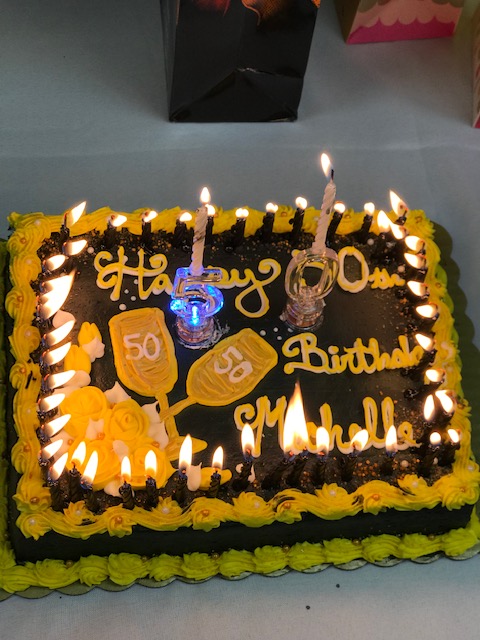 ...to say I was surprised would be a vast understatement. Queen B and Hugh have apparently been planning this since June, and, it showed; the room was filled with people I love, messages from people who couldn't be with us, and more wine than in all of the Napa Valley (ok, maybe not quite, but, friends? I got a LOT of wine!). It was an absolutely awesome night, and, will go a long way in taking the sting out of turning 50.

I am so grateful for all of these amazing people. I'm thankful for the circumstances that have brought each and every one of them into my life, and, I want to be able to spend another five decades loving them. God willing. 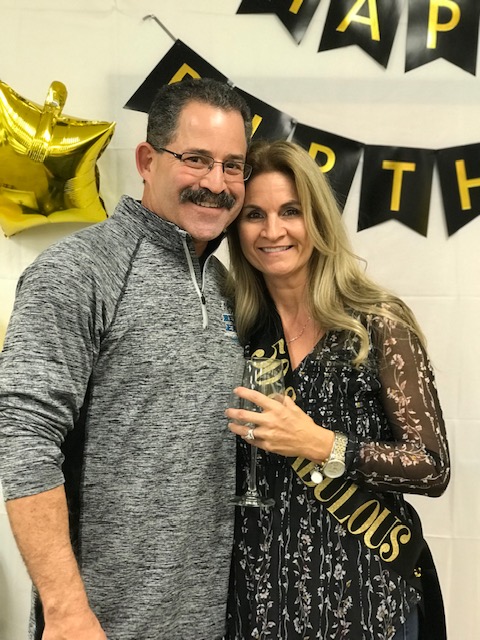 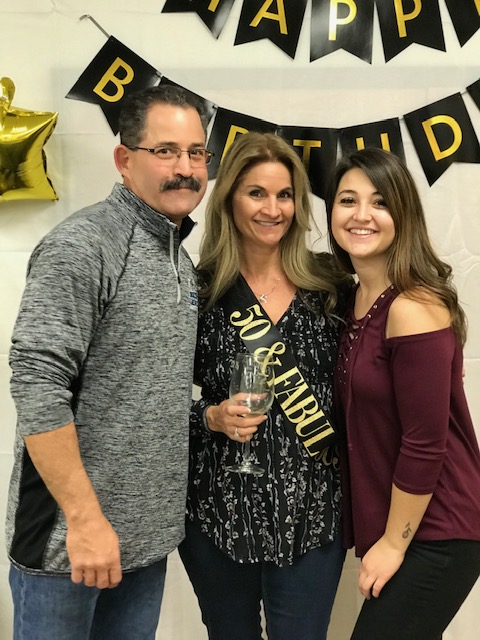 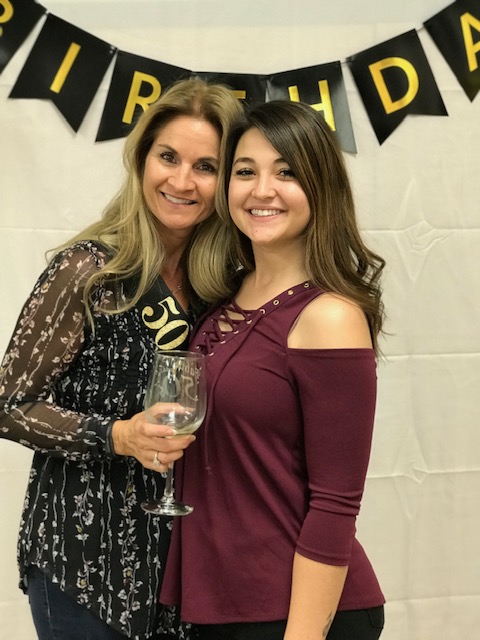 We missed the Man-Cub, but, he was able to join us via Facetime, so, it was almost like he was there. Almost (he's coming home on December 10th!). 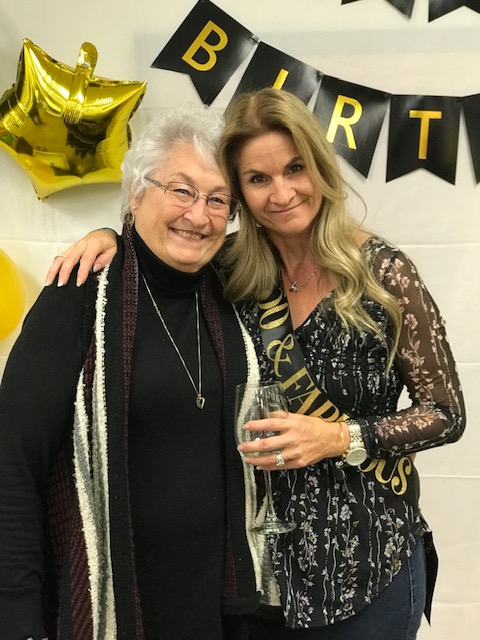 This lady, right here, made this all possible. And, I swear I felt Dad with us, too. 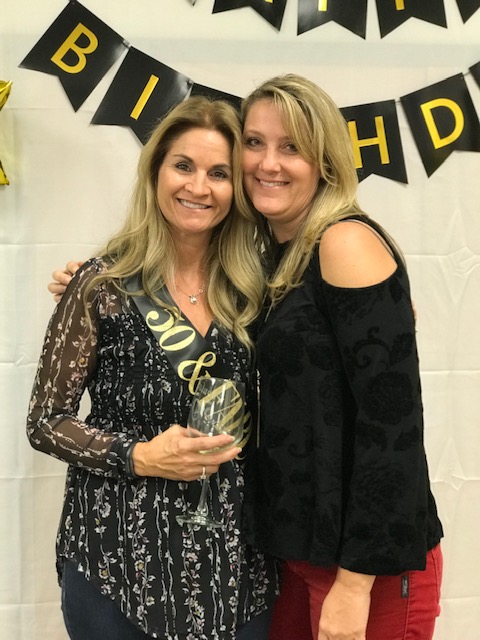 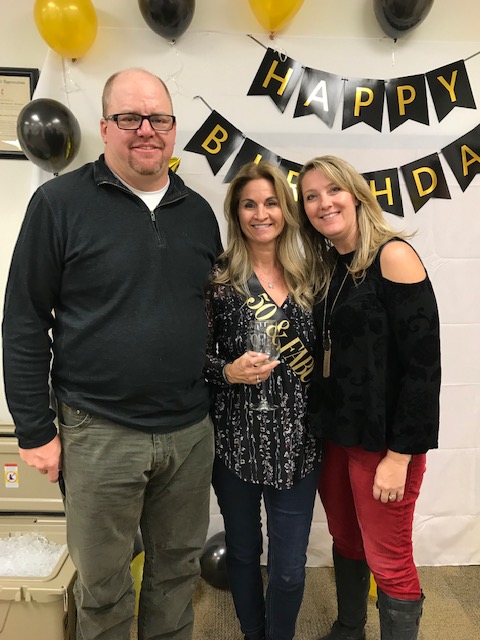 Phoebe and Petey made the trip from the Valley, which was so incredibly special; she was representing The Girls, and she did it in style, by presenting me with a blender and a bottle of Kahlua, which, is a nod to the night we all first bonded over kahlua shakes and completely burned-out my blender. Thirty years of friendship; how did I get so lucky? 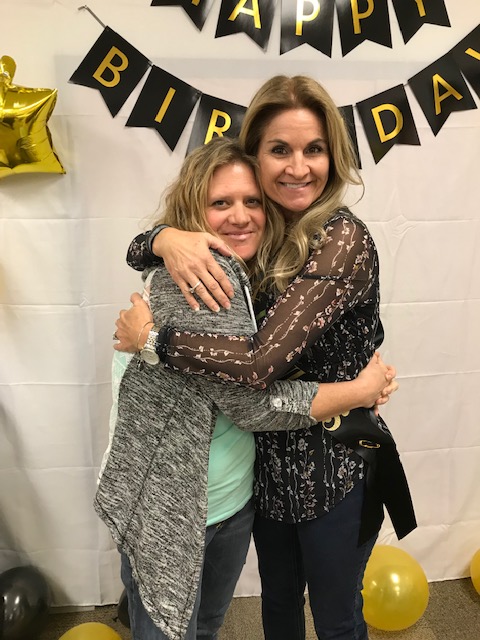 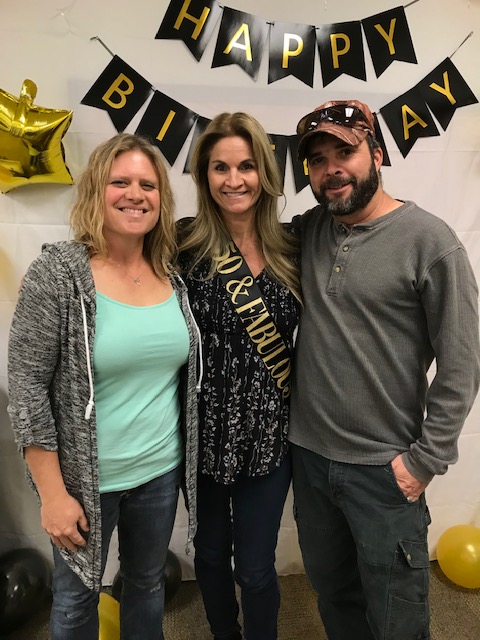 Chris and Jana have been on the road a lot this past year, and we have missed having time with them, so I was so happy to have them at the party. One of the greatest blessings in my life was meeting Jana twenty years ago, and, I'm so thankful that, when she and Bobby divorced all those years ago, she got custody of us. I'm also grateful to God for putting Chris in her path so that we would have him in our lives, as well. 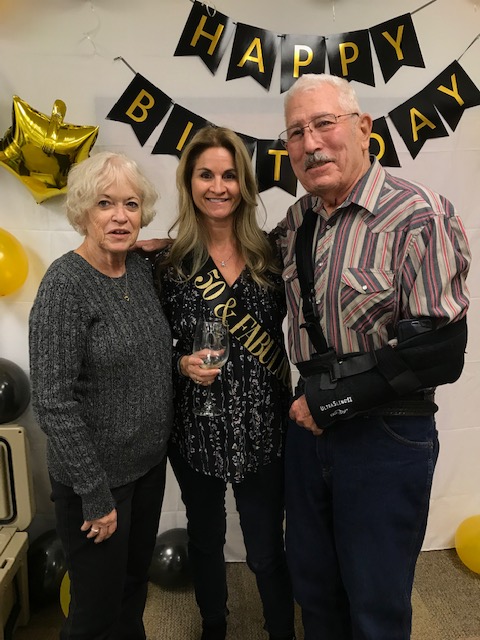 Oscar and Emily did an amazing job of keeping the party a secret, and, since Oscar only recently had surgery on his shoulder and is still in quite a bit of pain, it was especially good to see him having a good time. I definitely got lucky in the in-law lottery. 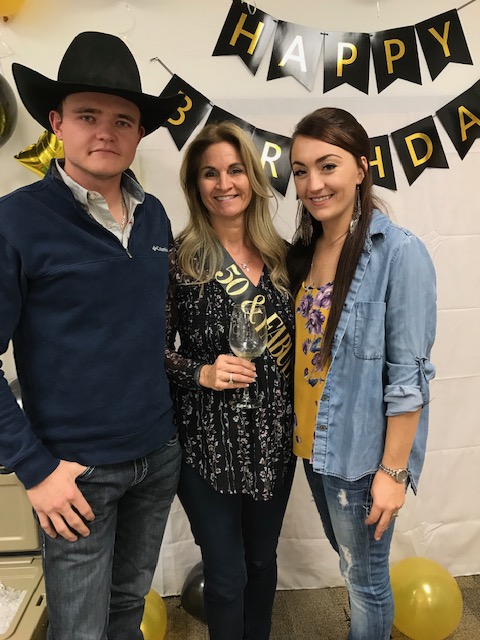 The Rodeo Princess and her Prince spent Thanksgiving with us and helped to sell the whole charade of getting me to the firehouse. I love these kids, and they did a great job of representing the family.

And, then there are the people who, while unrelated by blood, are family by choice... 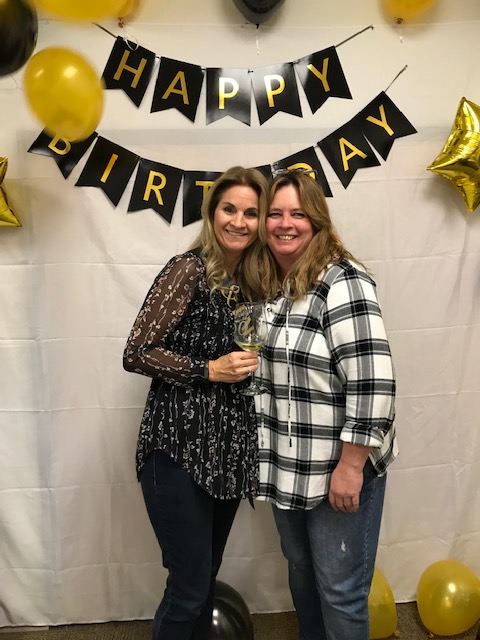 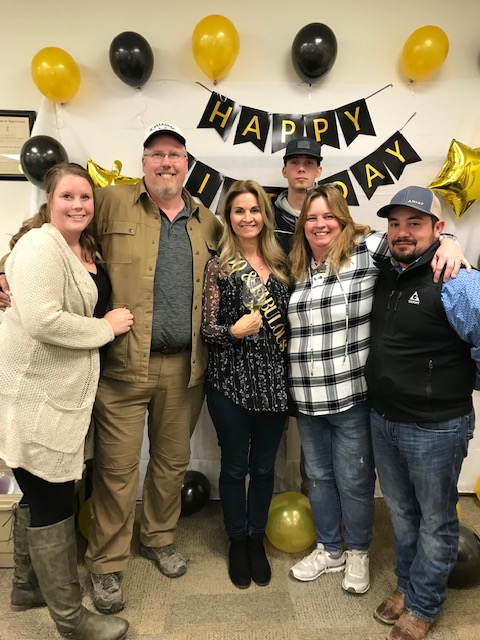 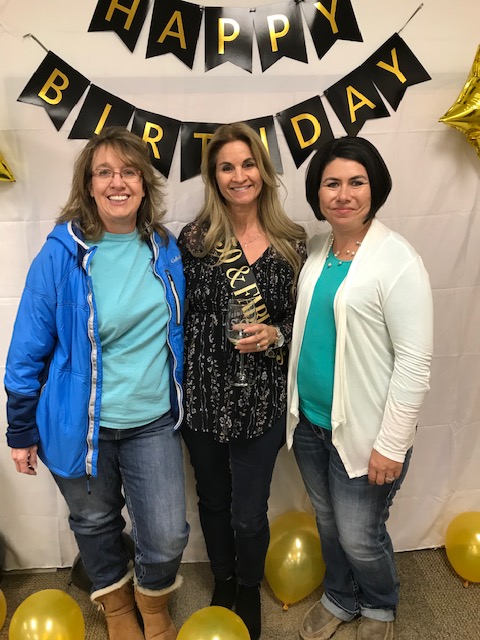 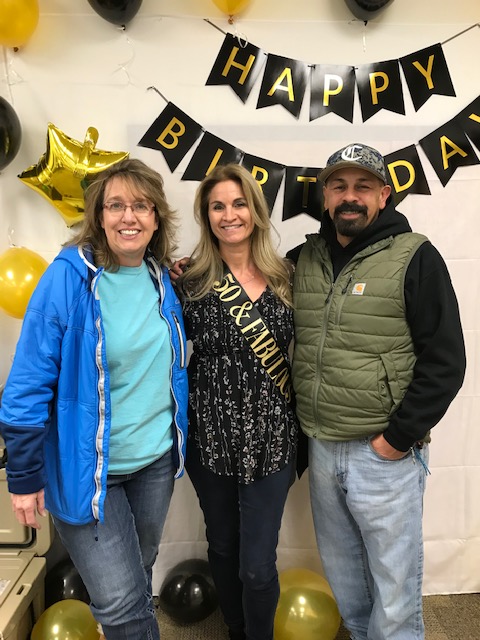 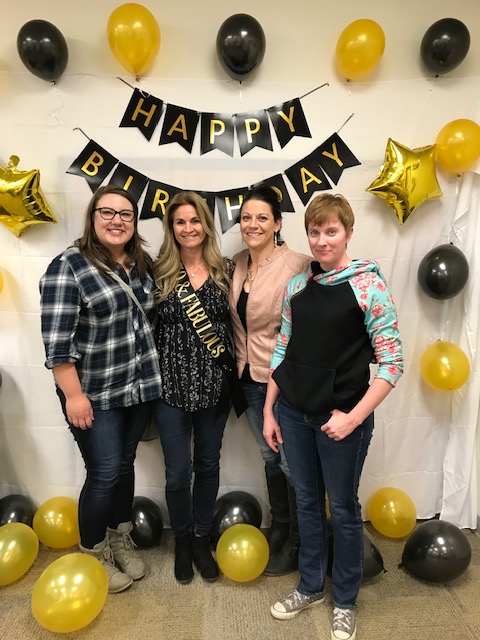 Last, but certainly not least, are my babies, the children of my heart, who, have been in my life, in my home, in my thoughts, and in my prayers, since they were tiny. I always wanted a big family, with lots of kids and constant chaos, and, thankfully, God delivered in a way that I did not expect, but, for which I am forever grateful. 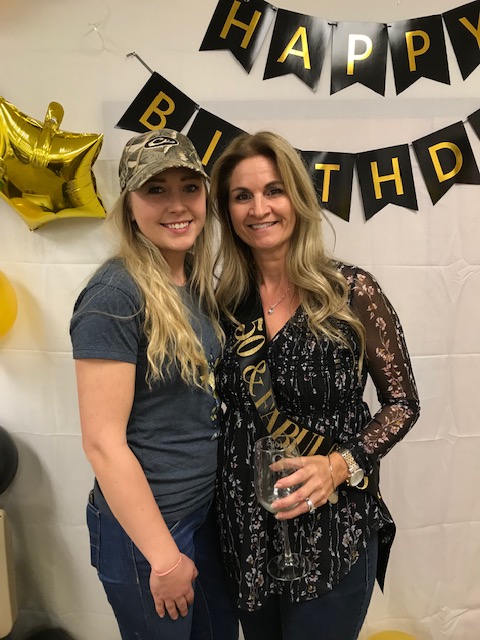 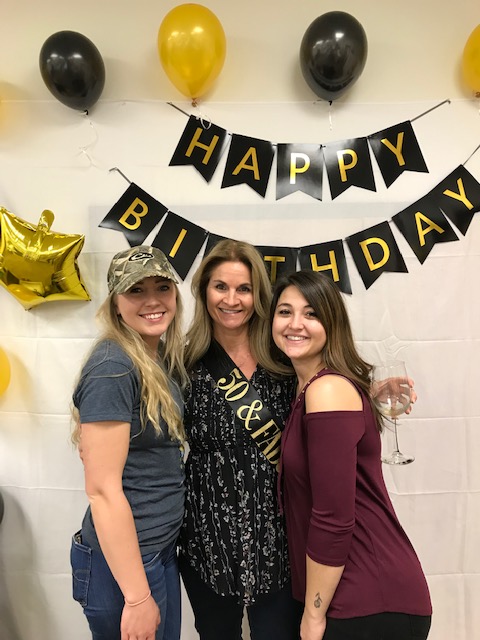 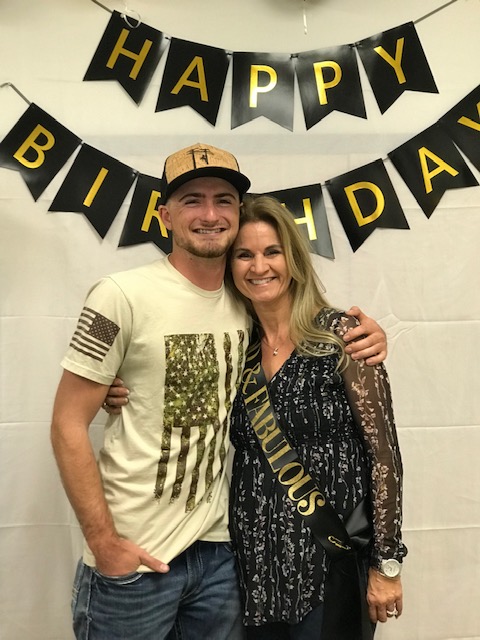 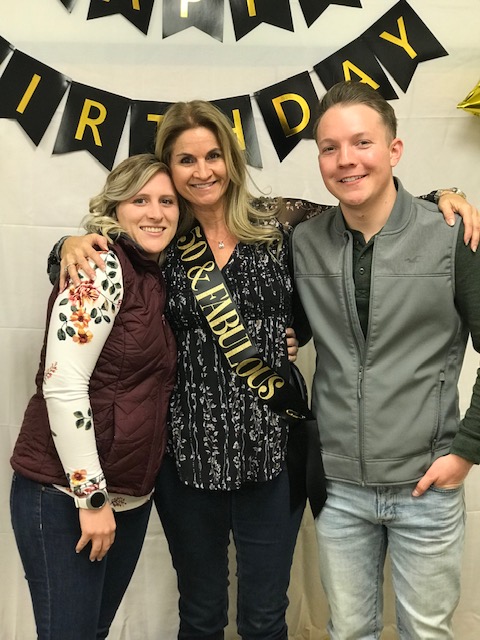 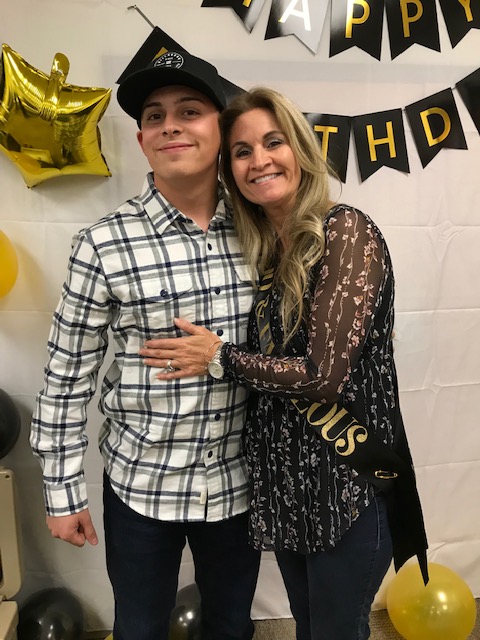 I can't believe that, on Wednesday, I will have toured the sun fifty times. It's gone by in a blink, and, it's really true what they say: The days are long, but the years are short.

As an aside, after some thought, we all concluded that, of all the people at the party last night, with the exception of my mom, Marty and I have known each other the longest... 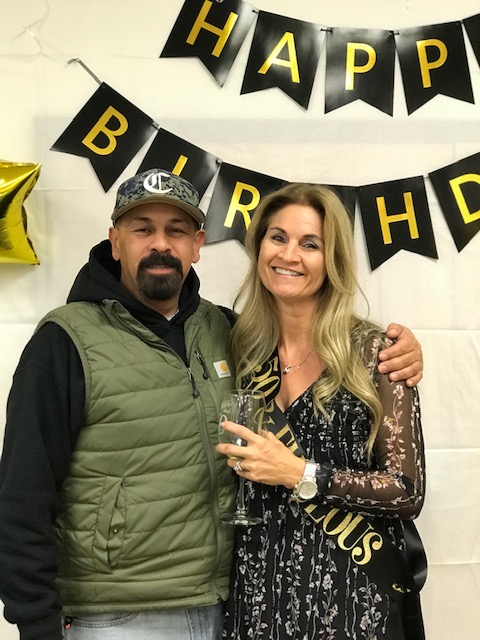 ...since kindergarten, to be exact. He's also the next to turn 50; I hope he has as much fun doing it as I am having.

I've said it all month, and I'll say it again: I am so blessed, so thankful, and so very, very grateful.