Because it's never too late, right? Actually, that's not true; if I were posting about my holiday decorations in, say, February, that would, indeed, be too late.

Anyhoodle, part of the reason that it's taken me so long to post this is that, for the first time ever; I actually did what I have threatened to do for decades: I refrained from putting out alllll of my Christmas decorations. I know! I'm as surprised as you are.

That said, the decorations I did put out were more then plentiful. However, I really struggled to get good photos this year, for some reason  that I am unable to explain *cough-laziness-cough*. This is the best that I could do... 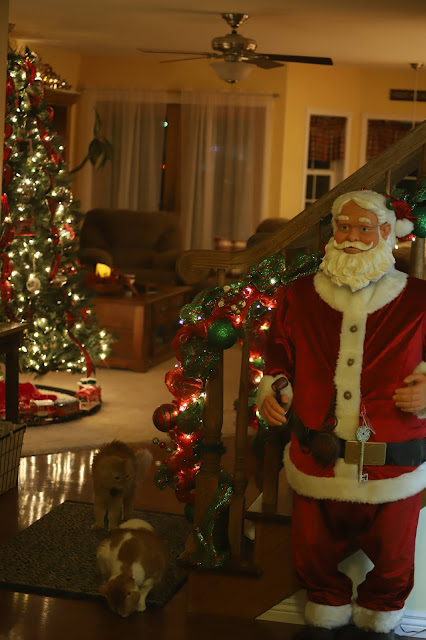 As always, this is the view from the front entryway. I stuck with tradition by displaying Santa front and center. It is also tradition for at least one of our fur babies to photo bomb this particular annual photo shoot, and, clearly, this year was no exception. Times two.

Hugh helped to decorate the tree this year and we opted not to put out all of the kids' keepsake ornaments, choosing, instead, to use ribbon for the majority of the decor. It looked really pretty, despite being a major pain in the ass to apply. 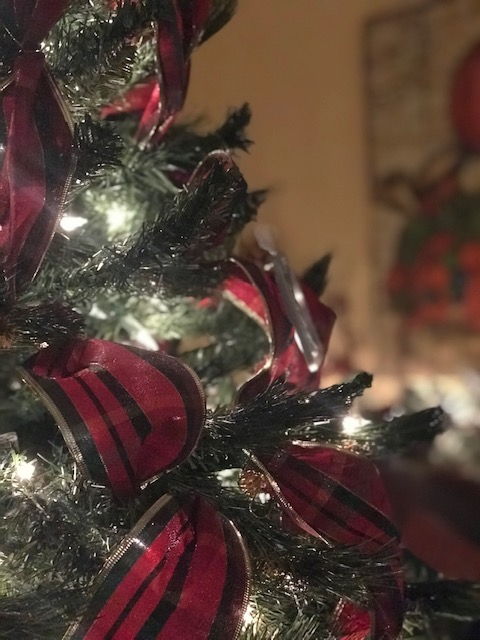 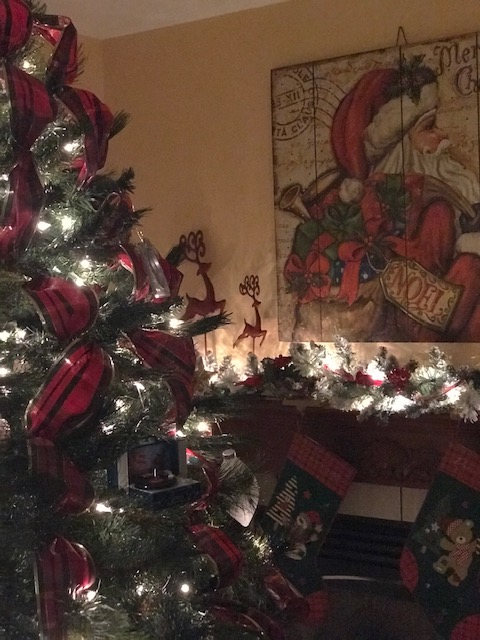 Not a lot changed on the fireplace mantel; Santa was again front and center, but, I used a different garland this year; one that I repurposed from the top of the entertainment center, since that space was occupied by my village this year.

I used my smaller vintage blow molds in the house this year; my 1968 Santa on the cocoa bar, and the choir singers next to my record player, which, I think I've mentioned, was played on repeat this year. 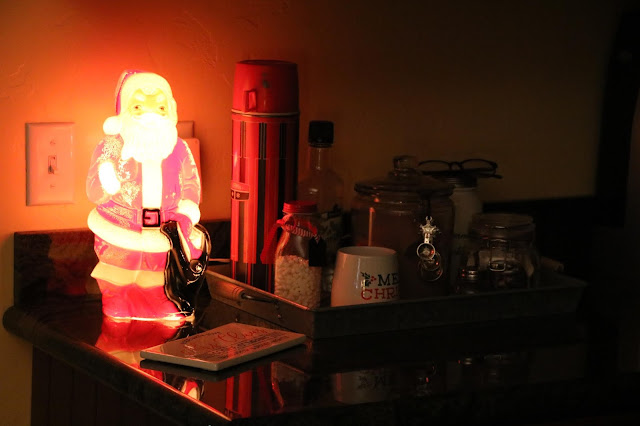 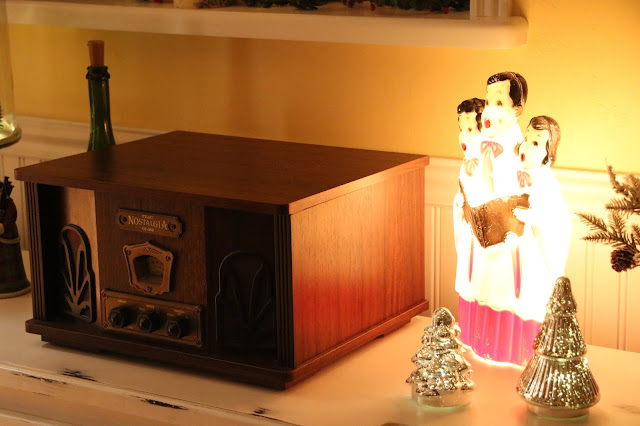 And, I lit up the front entryway with lanterns and a lighted garland on the stairs (you can see it in the first picture, behind Santa. See? I told you I struggled with the photos this year). 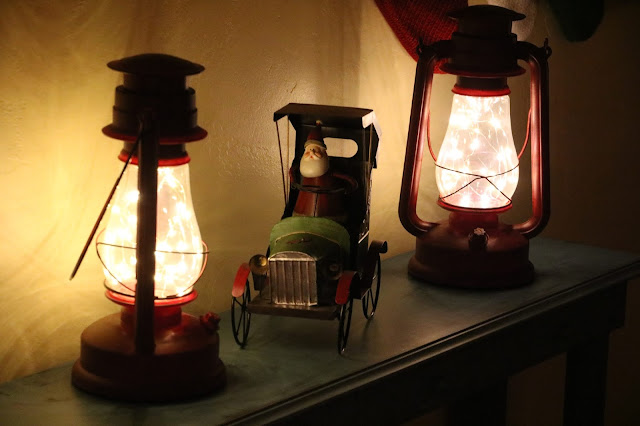 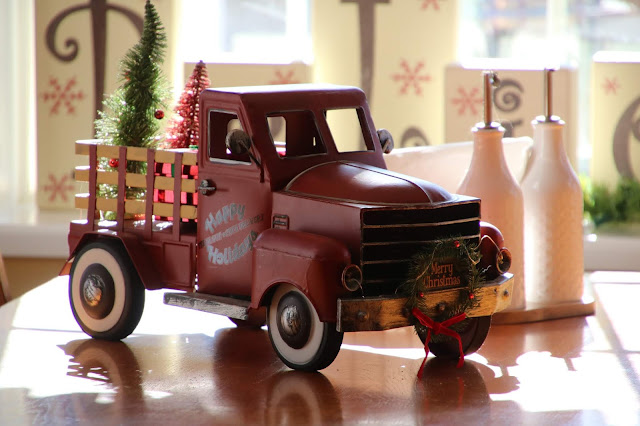 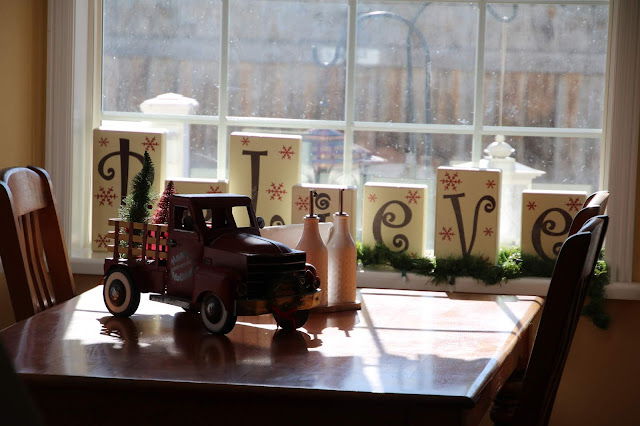 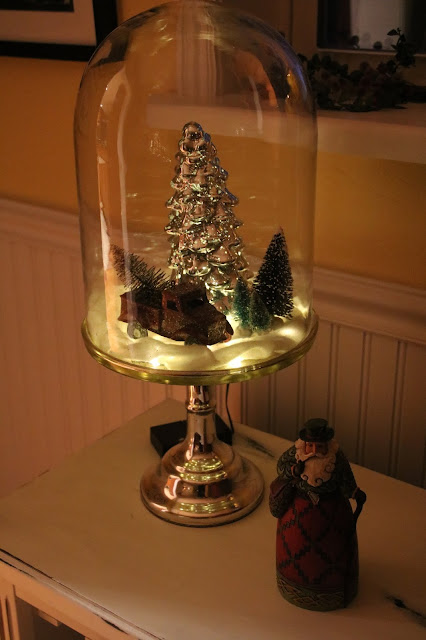 I managed to get the orphan tree out again this year, and, I enjoyed watching its' lights twinkle from my bedroom. 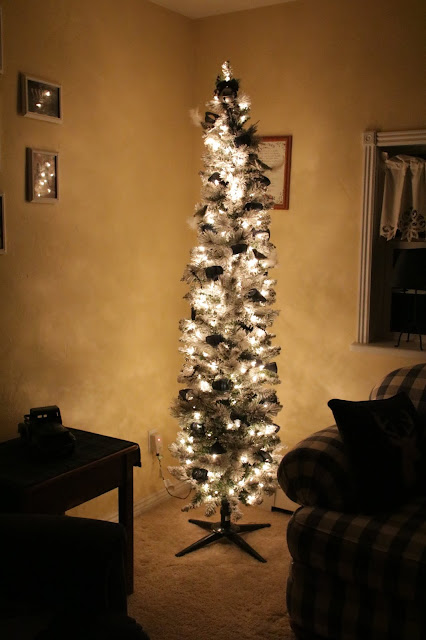 The porch was decorated pretty simply this year, as well. 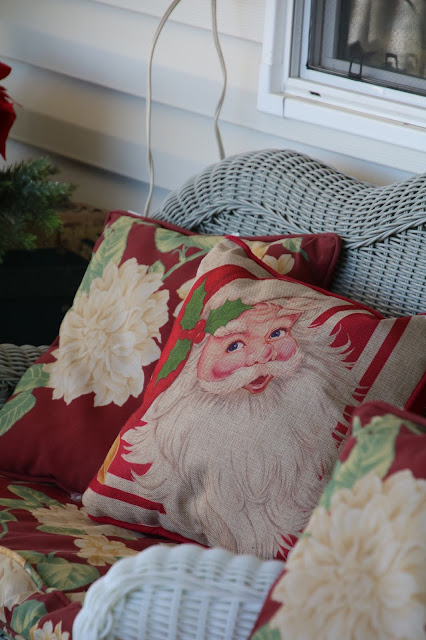 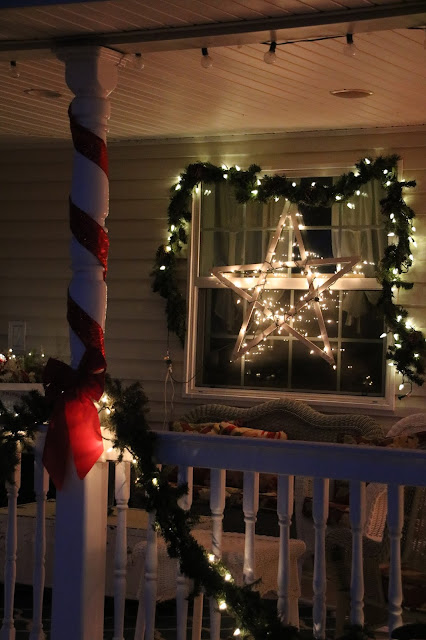 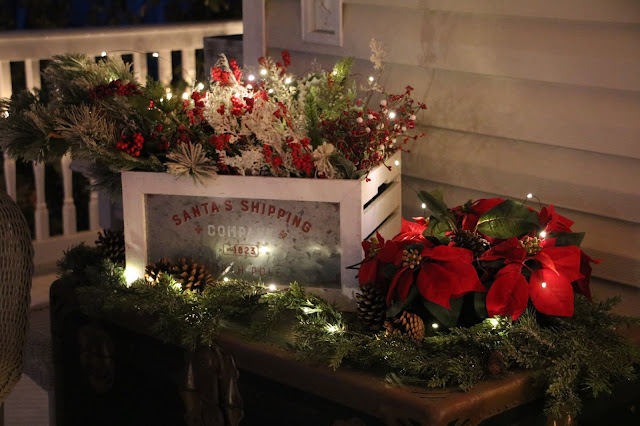 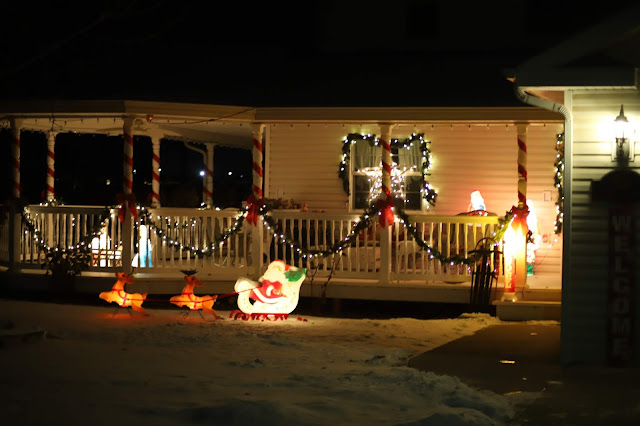 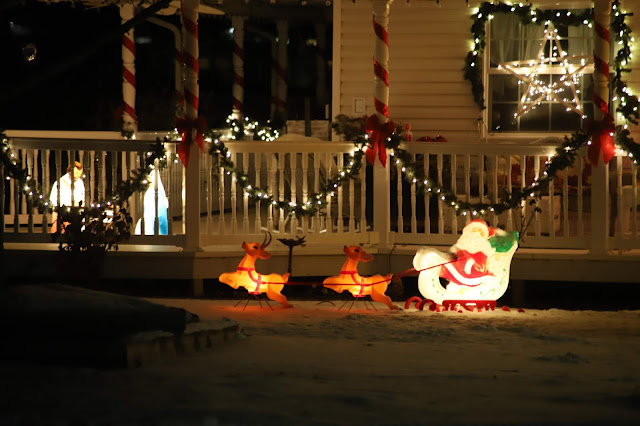 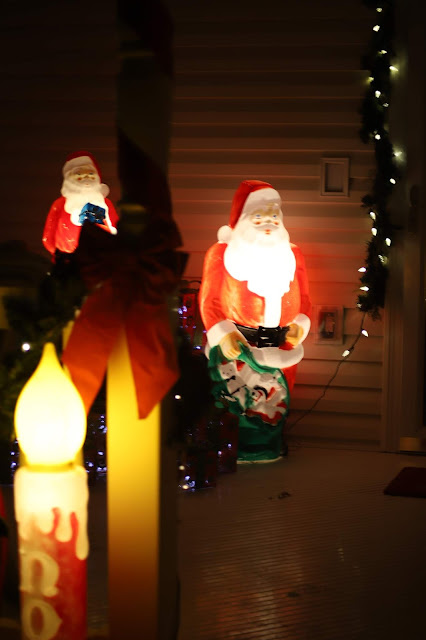 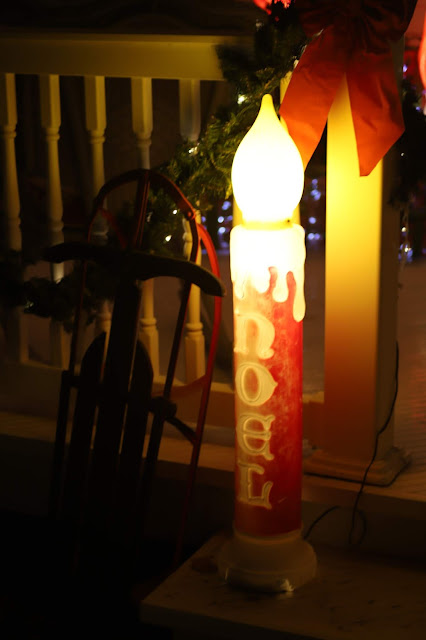 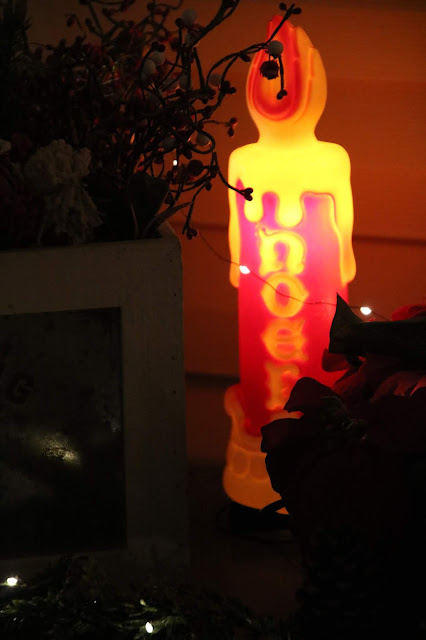 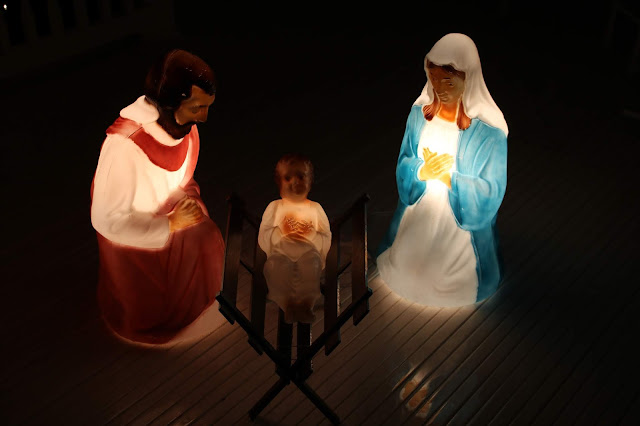 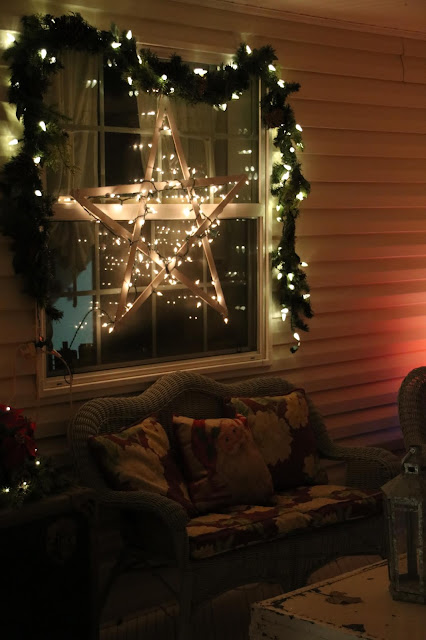 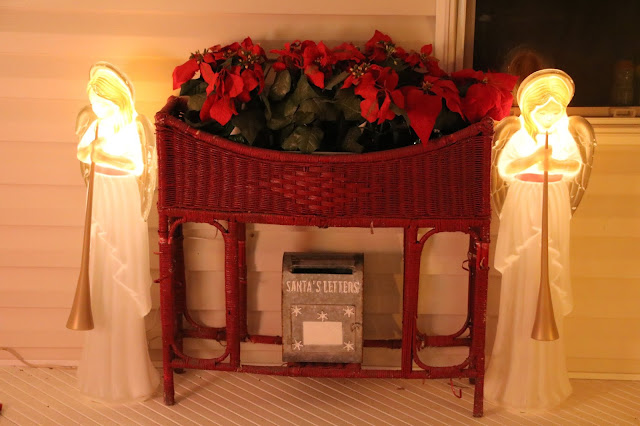 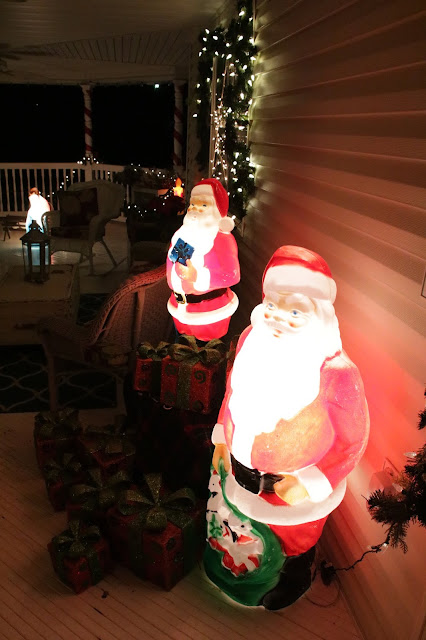 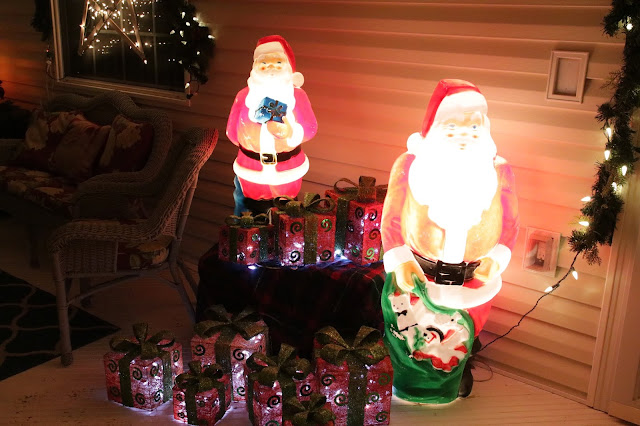 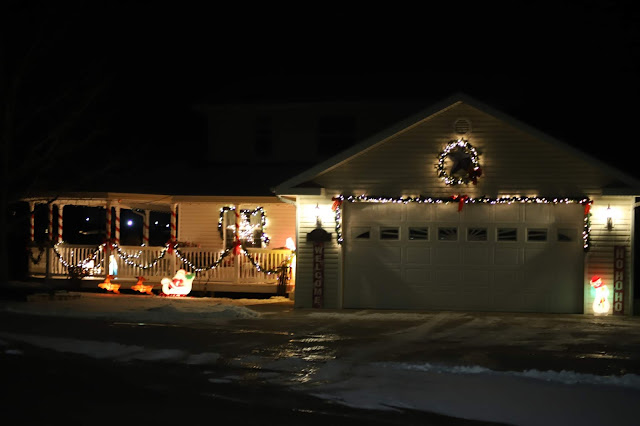 My new blow mold collection clearly set the stage for the decorations this year, and, I could not be more grateful to Hugh for diving into that treasure hunt; I have no doubt the collection will grow over the years.

So, that's it for this year! Tomorrow, I'll be taking it all down and returning it to the attic. I'm trying not to think about that right now.