Ok, so the 25 Days of Christmas writing prompts are proving less of an incentive than I had hoped. I would make excuses for myself, but, 2020.

Anyhoodle, last night I braved sub-zero temperatures to photograph the new stable that Hugh built for my now-complete nativity. It looks absolutely stunning as the centerpiece of my Throw-Back, Retro, Borderline-Tacky Christmas Yard Display™.

That's way too awesome not to be trademarked, y'all.

The stable took Hugh the better part two days to finish, mainly because he was on call for the ambulance service and got called out for a local transport; otherwise, he would have whipped those pallets into shape within a day (so he says).

I followed along with the progress of the stable in between house cleaning and other chores, popping into the garage every once in a while to document his progress, which, actually began with his rendering of the project on a piece of scratch paper (just like the majority of his projects, including the addition to our house, back in 2002ish). 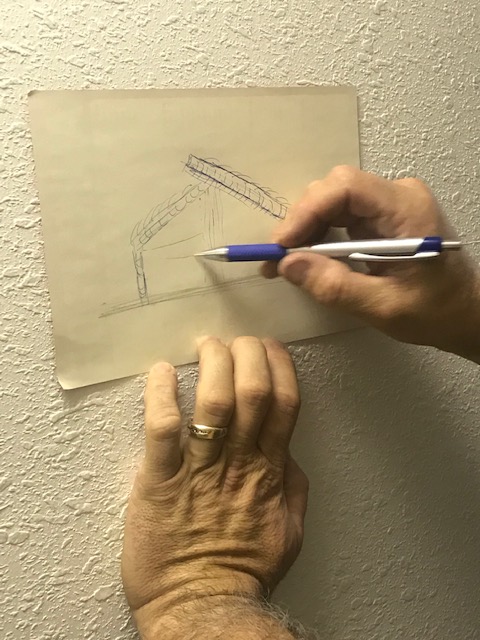 With his blueprint in hand, he gathered up a stack of pallets and got to work. 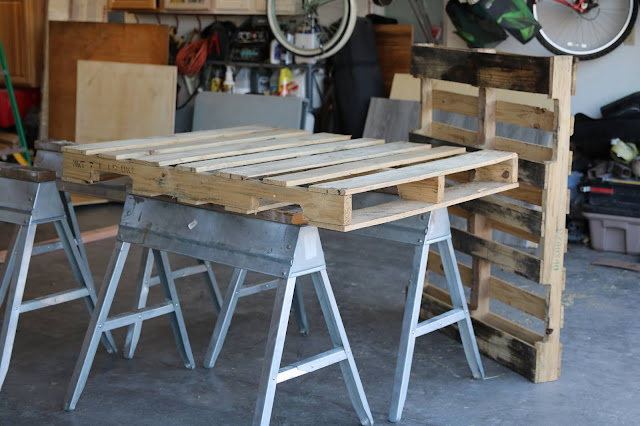 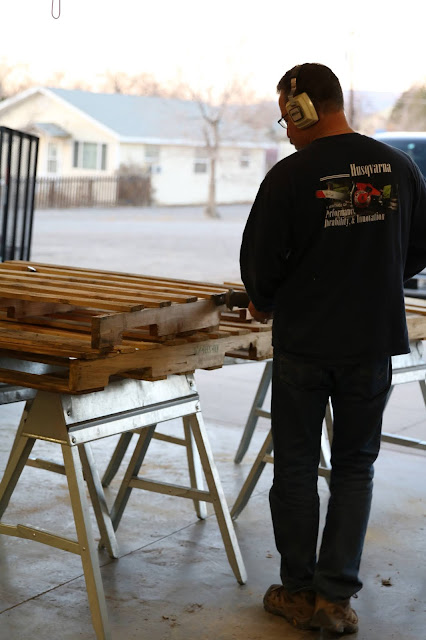 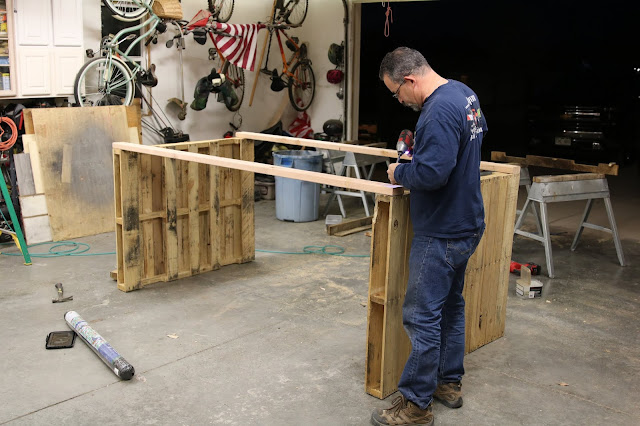 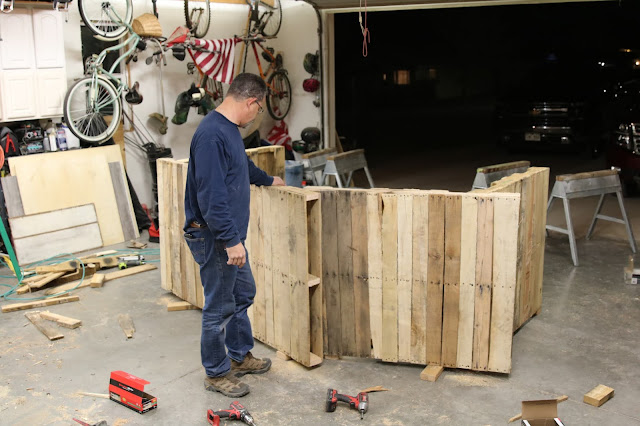 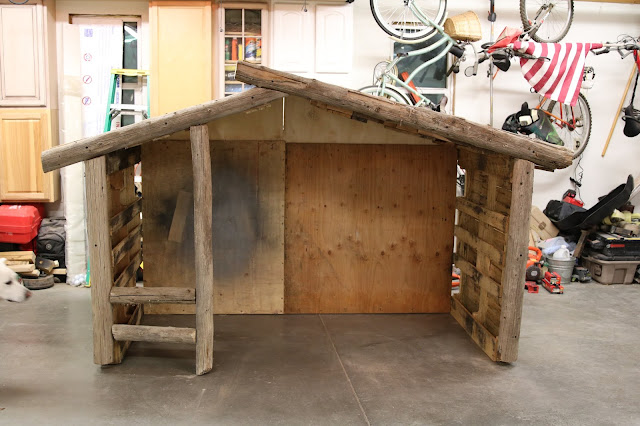 When he was finished with the structure, it was heavy as f%*#k, so he added handles and removable wheels so that he could move it into place in the yard. This will also make it easier to move to the backyard where we will be storing it for ten and a half months out of the year (unless Hugh decides to make it the West Wing of his man gazebo). I couldn't resist the opportunity to record the stable in motion, which I then posted on Facebook, earning hundreds of comments from Hugh and my friends and family; let's just say that Hugh could start a stable-building business any day now and make a profit immediately.

Once we had the stable in position, Hugh got the Holy Family settled in (following direction from my Mom to "cover the baby Jesus with straw so that he would be warm, of course). Then, he added the three wise men, shepherd, sheep, and camel that I recently acquired. He completed Team Jesus by adding one of my two herald angels. 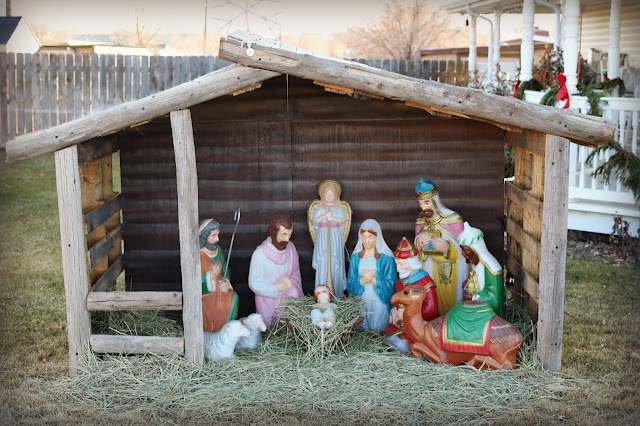 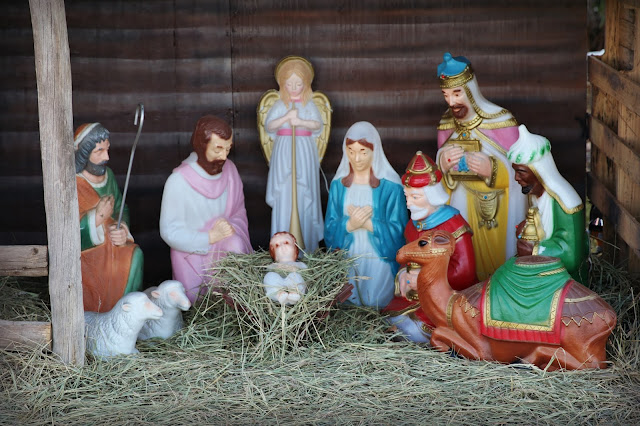 Later that night, I lit the star of Bethlehem above the stable, and we stood back to marvel at Hugh's handiwork. 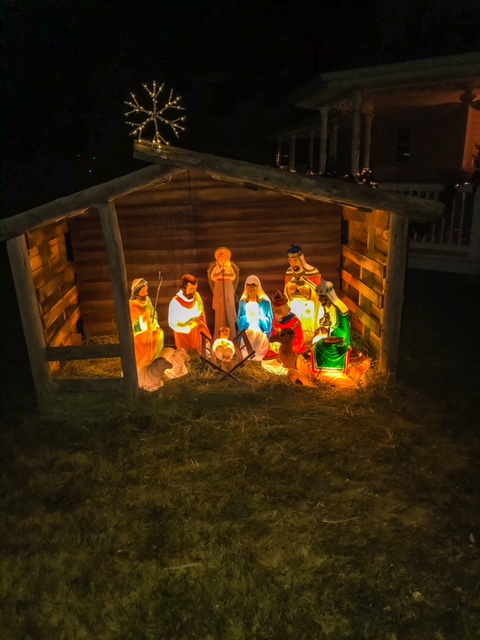 It is, as I said earlier in this post, the centerpiece for my yard display. I could not be happier, and, am so grateful to have such a handy hubby.