Gilligan, the True Adventures of an Agoraphobic Cat

Last night, while reclining on the couch with Gilligan on my chest, I noticed something odd; Gill’s face appeared to be swollen on the left side. So, after some sweet talk, Hugh managed to pry Gill’s mouth open, revealing a very swollen gum line and prompting a visit to the vet first thing this morning.

Now, Gilligan is neither a good traveler nor an ideal patient. For one thing, he is seventeen years old which, in cat years is closer to 84 and, while he’s still really spry for 84, he’s also rather um, cranky. Like, seriously cranky.


He’s also terrified of leaving the house, in fact, he has gone no further than the first five feet of the front porch pretty much ever and, one loud noise sends him scooting back in the house like his ass is on fire.
In addition to his reluctance to enjoy the great outdoors, with the exception of Hugh, the children and myself, he barely tolerates people so; you can imagine a trip in a car to an office full of strangers was not his idea of a great way to spend the day and, he wasted no amount of energy in reminding us of that fact because, while the drive to town took less than 20 minutes, he yowled piteously the entire way, mostly because he couldn’t quite get the hang of not pitching forward each time I tapped on the brakes or of rocking backward when I stepped on the gas and, really, there was nothing to be done about that because it is virtually impossible to explain the physics involved in centrifugal force to a cat.
I tried.


Besides, while annoying, the yowling was equally humorous once we resigned ourselves to the idea that it was merely the geriatric cat equivalent of a grouchy old man waving his cane and yelling at the neighborhood kids to GET OFF MY LAWN! And, he is 84, remember; some things have to be excused.
Luckily, the yowling stopped once we got to the clinic. Oh, it was quickly replaced by hissing but, if a strange woman shoved a thermometer up your ass, you’d hiss too (I hope. And, if not, I don’t want to know).

To make a long story short (too late!), Gill’s left canine tooth was infected and had to be removed, prompting a three-hour surgery and two-to-three weeks of follow-up antibiotics. Due to his age, there was some concern about complications like hemorrhaging but, other than Hugh’s wallet hemorrhaging money following the operation, all was well.


He’s home now and appears to be on the mend, by which I mean; he’s no crankier than usual and still seems to think that we were placed on this earth to attend his every need which may be true but, what can I say? My parents taught me to respect my elders. 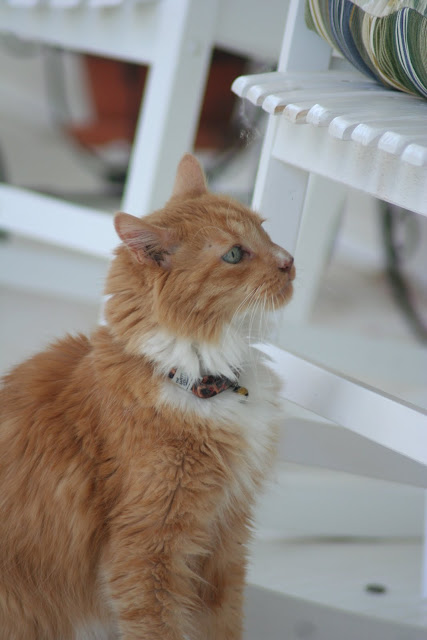