Cats Stealing Your Breath at Night: The Myth Exposed

I slept through my alarm this morning and would have missed my whole day had it not been for Finnigan waking me with a kiss and, by kiss, I mean; by licking my face with his fishy-smelling tongue until I awoke from annoyance.

Despite the fact that he has become somewhat nocturnal, lately and is doing his level best to make my nights a waking nightmare, full of nips at my ears and increasingly aggressive smacks to my face; I'm really quite grateful for that kitten and his fishy-smelling tongue because I have a lot to do, today.

That said, as I am writing this, Finn is sleeping peacefully on the couch next to me, he looks adorable, yet; I am sorely tempted to lick his face until he wakes up. I won't, though; I hear hairballs are a bitch to hack up and, as I've said, I have a lot to do, today.

One of my chores will be to wash the Man-Cub's basketball uniform; he sweated it up pretty good at yesterday's game and would prefer to wear it freshly laundered to his game on Saturday. I know, he's totally spoiled, clean laundry! Before you know it he'll start expecting a hot meal on the table every night. Oh, wait...

Anyhoodle, since I'm on the topic of his uniform, I should tell you that his team won their game, yesterday. The final score, 22-25, doesn't reflect the fact that the team trailed for most of the game, rallying in the final quarter to close a twelve-point gap before winning the game. Exciting. And, I'm not being sarcastic when I say that.

Much of the credit for the win goes to The Fearsome Foursome. 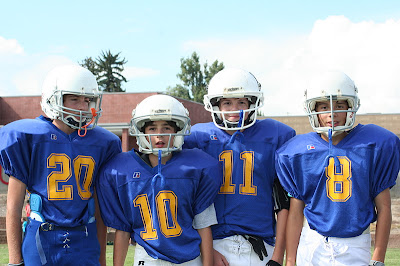 Of course, at the time, they were wearing basketball uniforms, I mean, obviously. Due to the crappy nature of the lighting in the old gymnasium in which their game was played, I didn't get a picture of them, however. Also, I think that they have all grown at least a couple of inches since this particular picture was taken at the beginning of the football season. Granted, the Man-Cub is still the shortest but, you know, he's wiry. Wiry? Aye, wiry.

Extra credit if you know what movie that quote is from. Hint: It also involves men in uniforms.
Posted by Chelle at 8:58 AM