It was a bloody good weekend at Casa de Chelle and, not just because the Man-Cub shot and killed his first doe, although, he did. 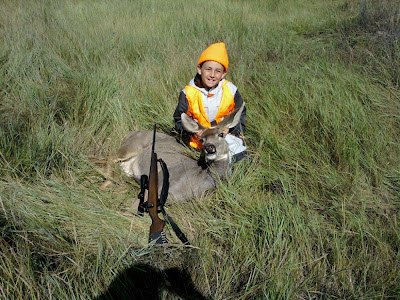 It was a clean kill and the kid could not have been more tickled. His dad was more than a bit proud as well and, while I'm not a huge fan of the venison; I do believe that learning to hunt is good for a boy. Or, for a girl, even. Someone's going to have to provide for the family in the event of Zombie Apocolypse, after all. 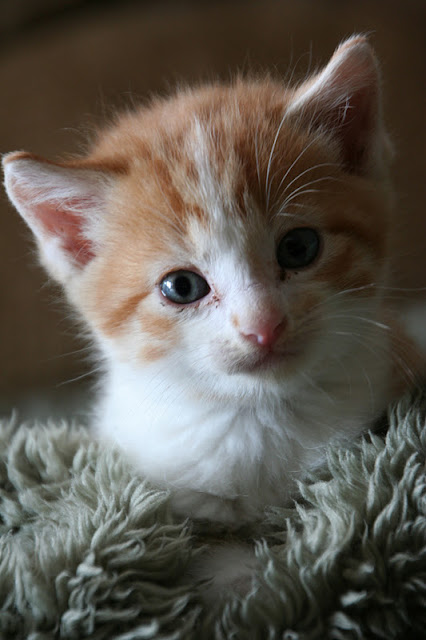 And, speaking of one animal in particular; Hugh has taken to bringing Finnigan into bed with us. If I thought that sleeping with a tiny human was nerve-wracking (and I did. Co-sleeping was fraught with tension for me back in the day which was particularly depressing when one considers that the man-Cub refused to sleep unless he was cuddled on my chest, you know, for a year), then I should not have been surprised to learn that sleeping with a puff of fur is even worse; what if I roll over and squish the life out of him? How would I ever explain that to the children?

I haven't really been sleeping, is my point. Which, makes early mornings particularly brutal and; The Teenager's six A.M. date with the school bus on Saturday morning came far too early. I managed to rouse myself enough to get her to the school, of course, where she caught the bus to a town several hours away for a volleyball game that I had to miss because I had committed myself to installing another Lifeline.

Once the unit was installed, I decided to toss a coin between taking a nap, which might alleviate the bags I was carrying under my eyes, and cleaning out the garden, which was way overdue. Guilt won out over vanity and I spent the rest of the morning and afternoon pulling the last of the beets, beheading my sunflowers and picking the very last of the tomatoes from the plants before ripping them from the ground. Rowdie was, as one might expect, quite unhappy with that particular chore.

Once the garden was bare, I pulled the hummingbird feeders from the porch, washed them, and stored them away until next season. Next, I filled the bird feeders with seed as well as some of the sunflower seeds from the garden and hung them in the tree outside of our office window; soon I will be able to watch the birds swarm the feeders while working on the computer which is one of my favorite things to do during the dreary winter months.

Speaking of the tree outside the office window, last week it still looked like this... 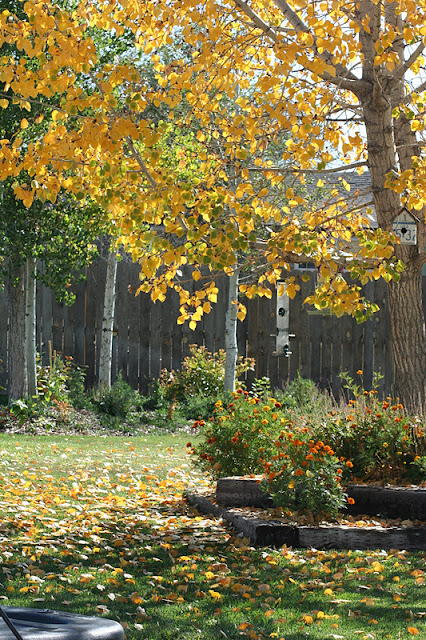 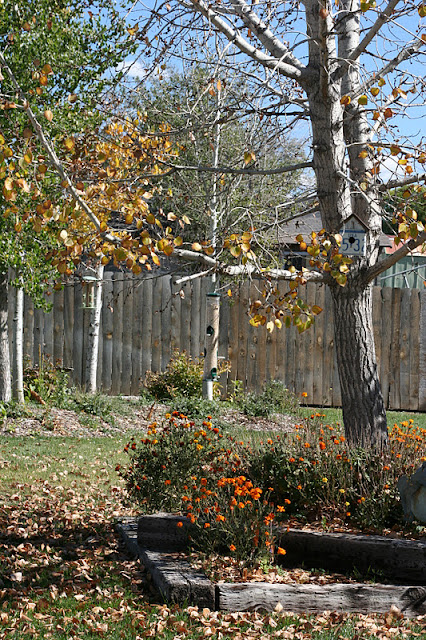 It also snowed in the mountains around Petticoat Junction this weekend which is just one more nail in Autumn's coffin.

In happier news, I made it through the ASTRA initiation ceremony yesterday. Now, I can focus on organizing the team lunch for The Teenager's volleyball game this coming Saturday and on planning the team dinner next Monday and, once those things are behind me, I'll have nothing to do, why,  I'll be positively bored.

Wait, did you just hear God laughing?
Posted by Chelle at 1:52 PM