The Man-Cub's football season comes to an end this Thursday and, while it would be a stretch to say that it was a winning season, I can say that the Man-Cub has enjoyed some success. He had an especially good game on Saturday, catching a pass in the end zone for the team's first touchdown, making several critical tackles, making an interception and, in one of the most exciting moments of the game, recovering a fumble by the opposing team and running the ball from their 10 yard line all the way to our ten yard line. 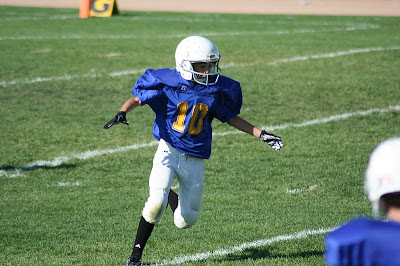 What's this? A fumbled ball? 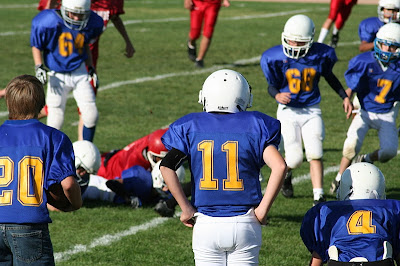 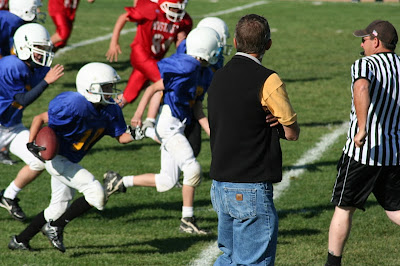 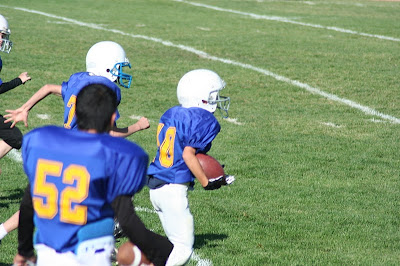 Still running...*
It was a helluva run and would have resulted in the Cub's second touchdown of the day had it not been for him realizing that a rather large kid was closing in on him. This realization caused the child to stutter-step which led to him falling down.

And, while the run enabled his team to complete a pass play to to score, it did not bode well for the Cub's ability to outrun a serial killer in the event that he ever finds himself vacationing with his college buddies at an abandoned summer camp. I hope he takes the lesson to heart.

Speaking of which, this would be a good time for me to mention that I spent all day today decorating my house for Halloween. It wouldn't have taken all day had it not been for the horror show I discovered going on underneath my couch when I moved it to make room for some boxes; vacuuming under the couch led to a full house cleaning which led to reorganizing the Halloween boxes in the attic which led to window washing and rearranging of the furniture which rapidly ate away at the hours in my day.

On the bright side, my house looks awesome.

I was in the mood to decorate for the holiday because I spent yesterday driving over a scenic mountain pass and the colors were especially inspiring. I was driving over the mountain pass to attend The Teenager's volleyball game, a trip that I will repeat again next weekend, and, the one after that. And, the one after that. Obviously, if the house was going to get decked out for All Hallows Eve, it was going to have to be done today.

Oh, and The Teenager's teams won the games. And, The Teenager played marvelously which is sort of becoming a trend for her (knock on wood). This gives me renewed hope for at least half of my offspring being able to outrun a chainsaw-wielding serial killer without tripping over their own feet.

*Not pictured: The Man-Cub tripping over his own feet and falling down. The photographer was too busy laughing to push the shutter button.
Posted by Chelle at 9:07 PM