Recipes From the Porch: Malibu Wraps

In true keeping with the phrase "Don't like the weather? It's Colorado; give it five minutes and it will change", yesterday was gorgeous. Today isn't looking too shabby, either, and I find myself jonesing to decorate the porch for the eventual return of Porch Night.

Since it's still a bit early to break out the summer finery, however (see phrase above), I will have to settle for decorating the porch in my head. This is actually not as hard as one might think.

When I think about summers on the porch, I immediately think about wine, good cheese, and these wraps; a favorite of pretty much everyone who attends Porch Night, but, especially of the children, who; gobble them up like they are going out of style. I find this rather amusing, considering the fact that at least one of my children refuses to eat most of the ingredients of the wraps, when served outside the wrap. What he doesn't know won't hurt him, apparently.

In small bowl, mix cream cheese with preserves and green onion. Spread a generous layer of cream cheese mixture on a spinach tortilla. Layer ingredients in the following order; three slices shaved ham, several leaves of spinach, carrots, bell pepper, cheese, and alfalfa sprouts. Roll tortilla tightly, slice into pinwheels and repeat with remaining tortillas. Serve. Can be made ahead of time and refrigerated, if covered tightly with plastic wrap.

They are seriously addicting, y'all. Seriously. I dare you to eat just one. I'm not even kidding. 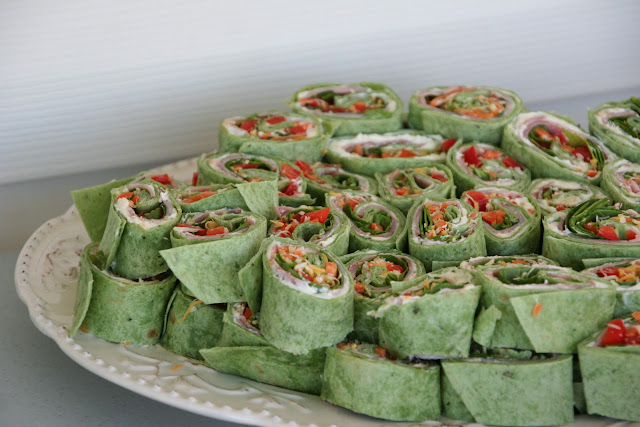 Also, could summer get here any faster? Please?
Posted by Chelle at 9:41 AM