Right this moment, there is a 24" round cake baking in my oven and an almost-fourteen-year-old boy smiling happily on the couch next to me. That smiling teen aged boy has chocolate cake batter in the corners of his mouth as well as a smudge of batter on his shirt, and, for a minute; I am able to close my eyes and recall the thirteen other times that he has appeared in much the same manner.

Of course, The Cub would have me remind you that this only happened twelve other times since I gyped him out of a cake last year. Not really letting that go, is he?

He's right, though. It was an unforgivable lapse, given the time and effort that I put into (most) of those other cakes.... 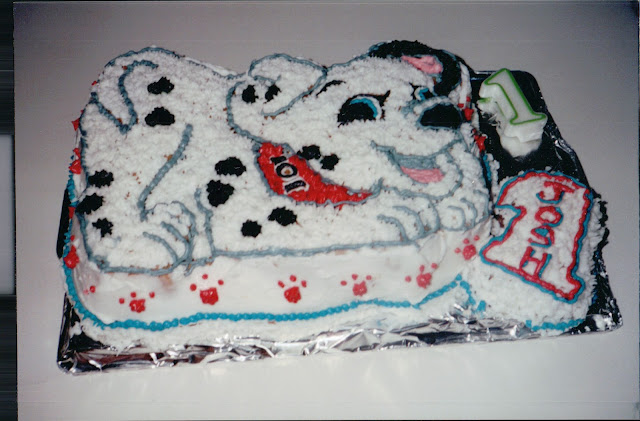 Year One: The 101 Dalmatians theme was carried out through the tableware and a pinata. I also made ice cream "pups"; scoops of chocolate chip ice cream shaped to resemble dog's heads with mint patties for ears. They were adorable, if I do say so, myself. Also, I set the bar high early on. 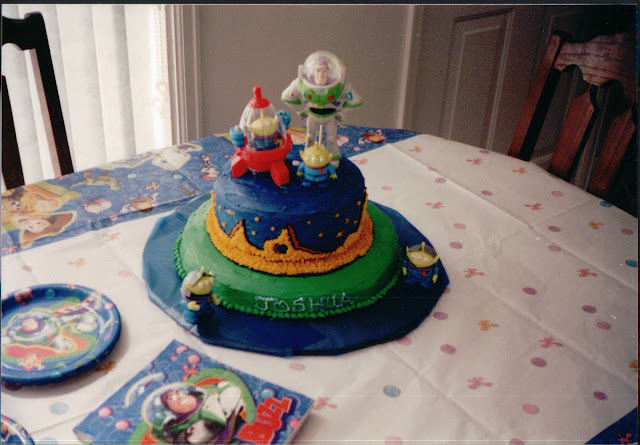 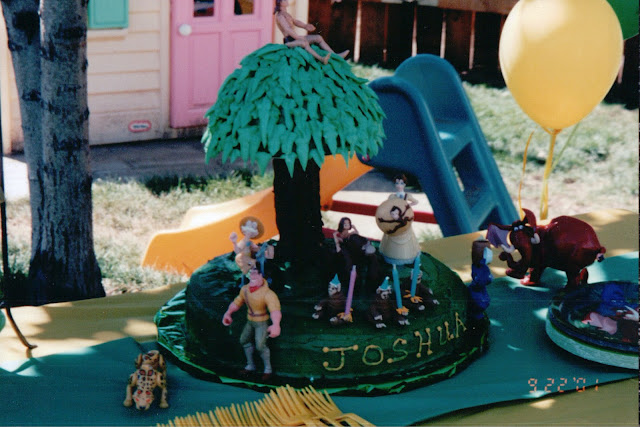 Year Three: Tarzan! This cake continues to be a personal favorite of mine; everything was edible, including the tree. Also, it took me a solid month and a half of eating Happy Meals for lunch in order to collect all those Tarzan figurines. We still have them, though; someday they will be worth....absolutely nothing.

I also loved the Cub at age three (it goes without saying that I love him just as much at thirteen and 363 days); he had the most kissable cheeks in the free world and he gave the best kisses. Also, he sorta resembled a monkey which went really well with the Tarzan theme, see above: Setting the bar high. 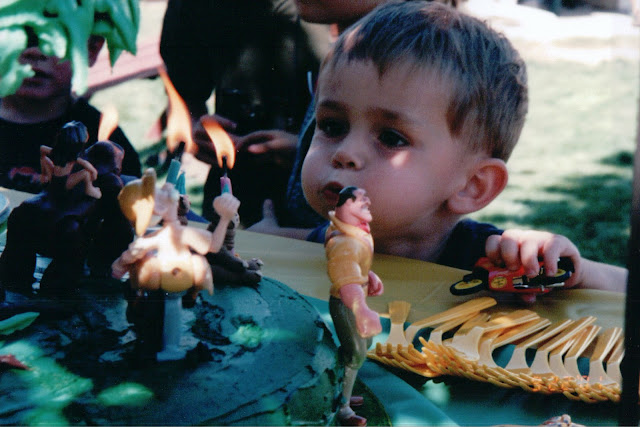 But, seriously, the cheeks! I die! 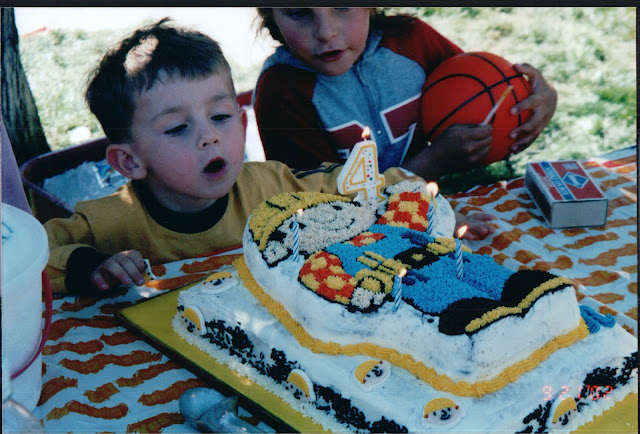 Year Four: Can we build it? Yes, we can! Yep, Bob the Builder was all the rage in our household. Not coincidentally, I think Hugh started demolition on our home not ten minutes after the last guest had left this party; our four-year-long home remodeling project had begun. 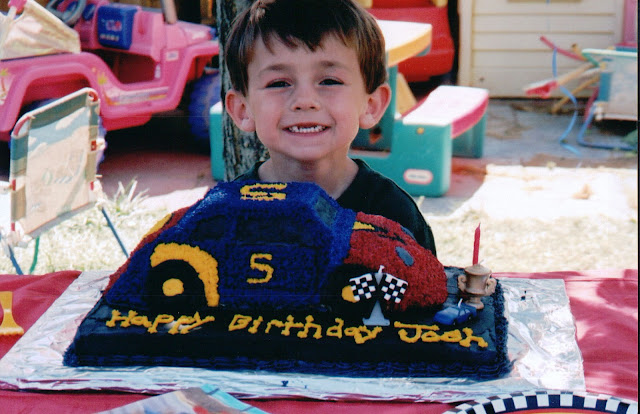 Year Five: Hot Wheels were quickly becoming a staple in our home. This party featured build-your-own race cars made from cardboard boxes that each child painted; we then "raced" around the yard. We even had a working stoplight, courtesy of Hugh's employment with the Petticoat Junction police department. 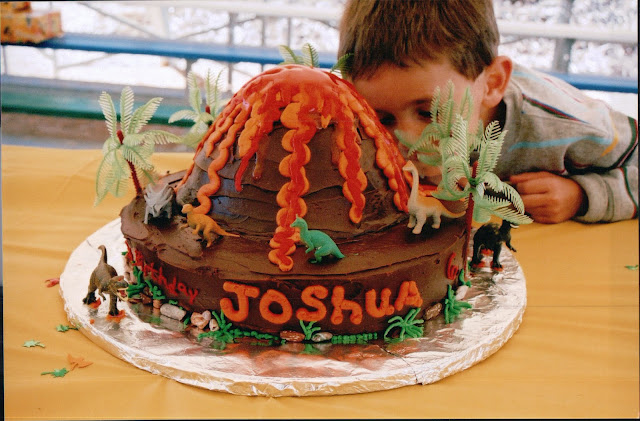 Year Six: Ok, this might actually be my favorite cake of all time; the volcano erupted, people! Yet, it was completely edible! Also, my OCD party planning was in full swing; we hosted the party at the local park, where I supervised the kids in a dinosaur dig (I actually buried bones in the community sand pit prior to the party), encouraged the wacking of a dinosaur-shaped pinata, and handed out party favors in the form of treat-stuffed dinosaur eggs that I had spent weeks making out of paper mache plus I lit that damn cake on fire. I...have no words. 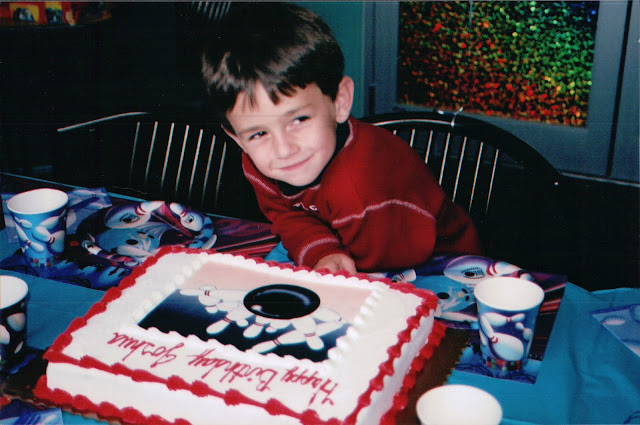 Year Seven: The Remodel From Hell was nearing the end of its' second year and I had no patience for a party at the house; a party at the bowling alley in Hooterville fit the bill, perfectly, however. This also marks the first time in my parenting history that I purchased a store-made cake. It tasted like crap. Lesson learned. 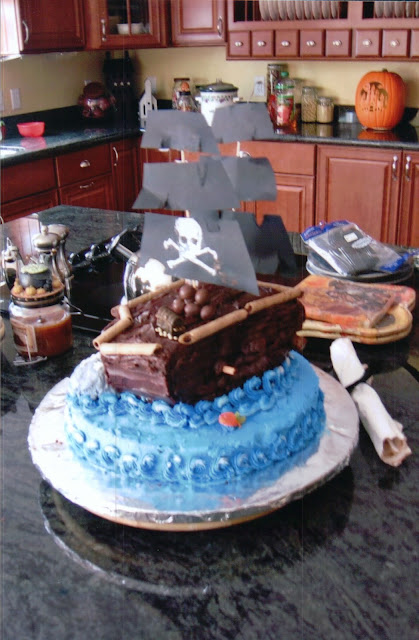 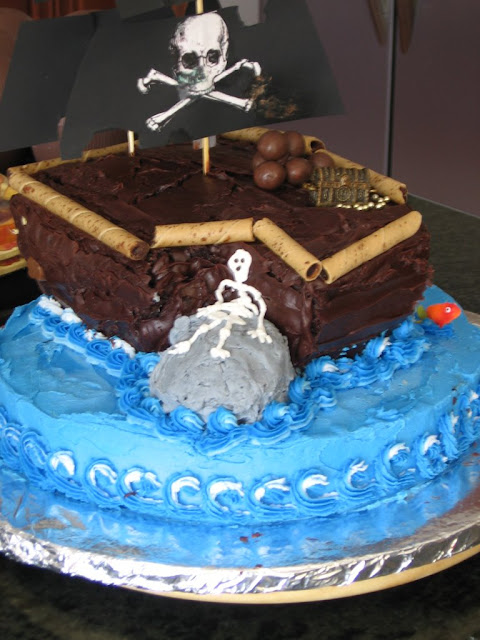 Year Eight: The cake that almost killed me. I worked on the pirate ship for hours only to return after a good night's sleep to find that the damn thing had fallen apart. Luckily, fate intervened to dispell my nervous breakdown; fate in the form of the Man-Cub who immediately complimented me on the "cool shipwreck". With those two words, inspiration struck and a boulder was quickly fashioned out of a piece of the cake that had broken off, and, a frosting-piped figure of a skeleton laying on the boulder completed the look. The day was saved (and wine was consumed). 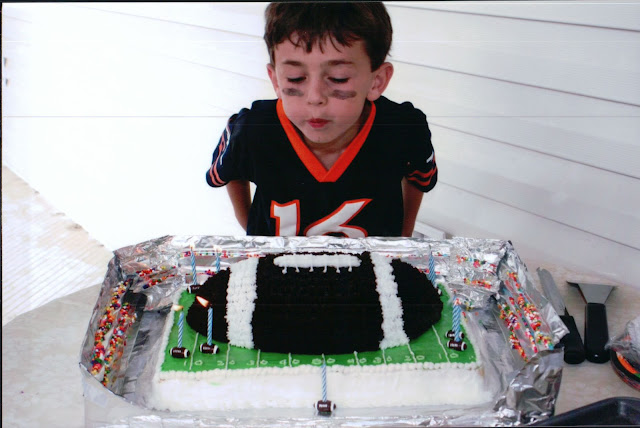 Year Nine: What do you get when you take a woman who finds no enjoyment whatsoever in professional football and bless her with a son who is football-crazy? A football stadium cake that tastes suspiciously of irony. 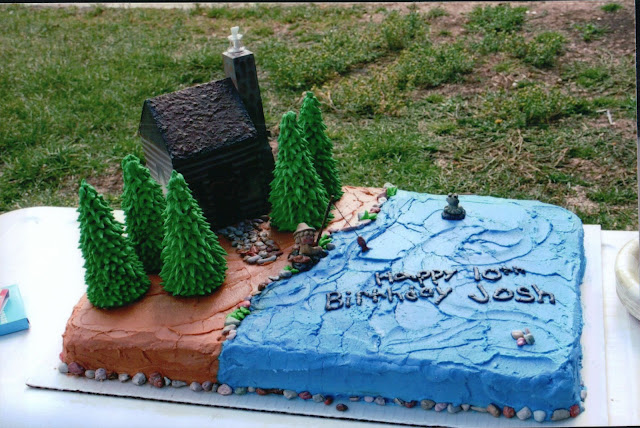 Year Ten: The Cub's party this year took place at Granny's cabin in the woods. The cake was simple and easy to transport. It was also completey edible with the exception of the cabin, which was a decorative oil lamp that I gave to Granny after the party as a thank you for hosting us. 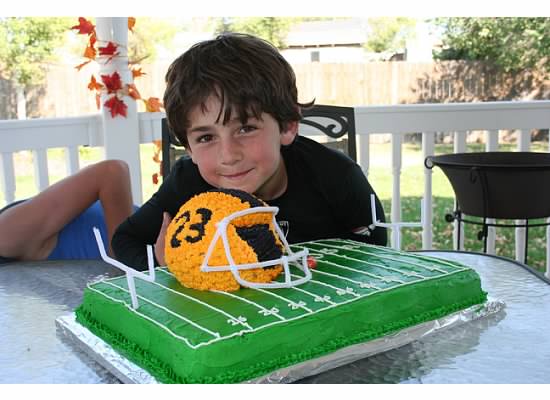 Year Eleven: Christ on a cracker, son; football, again? See above: IRONY. Also, thank goodness for Hugh's wicked pipe-cleaner-bending skills, otherwise those goalposts would have looked less like goalposts and more like abstract art sculpture which wouldn't have followed the theme, at all. 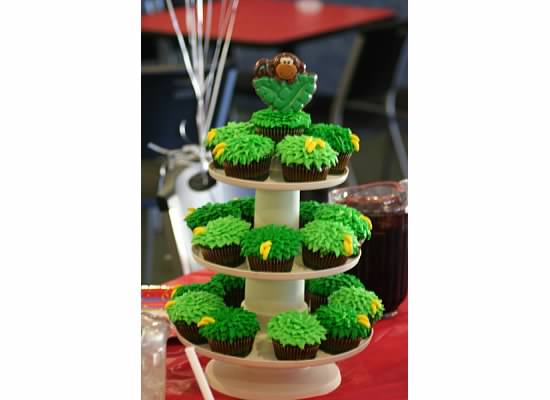 Year Twelve: The party was held at a fun park in Neighboring City. Buying a cake at the venue was out of the question, see above: Crappy-tasting store-bought cake. Cupcakes were an awesome compromise and the tiered stand made for a nice presentation.

This brings us to Year Thirteen...

Yeah, that would be the Man-Cub's point exactly.

Perhaps it should say: Happy 13/14 Birthday!