The Continuing Adventures of Jerome the Roaming Gnome

Fresh off his tour of Salt Lake City, Jerome the Traveling Gnome finds himself in the company of a large group of Fifth Grade students from a rural Colorado school, their mission; to explore the ancient ruins of Mesa Verde, ancestral home of the Pueblo Indians. 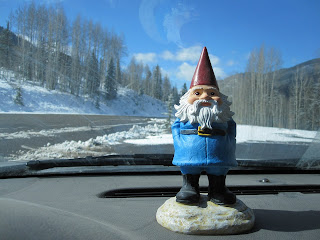 Despite less than perfect weather, the trip begins with a long journey by car. Jerome has the opportunity to ride the bus with the school children but wisely opts to go the private car route, a decision he will never regret.
Upon arrival at their first destination, the Anasazi Heritage Center, Jerome and his assigned group of intrepid explorers begin their observation of the ancient people. Much discussion of farming techniques, stone weaponry and basic human survival techniques gives way to heated arguments over whom historically worked harder; women who ground corn into cornmeal using a mano and a metate or men, who hunted big game with weapons constructed of sticks and stones. Jerome wisely abstains from voicing an opinion. 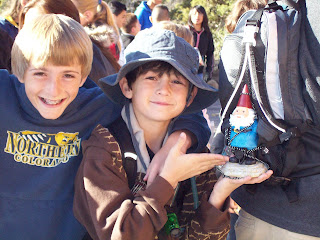 Following a number of hours exploring the Heritage Center, Jerome and his group retire to a local hotel where Jerome opts out of swimming in the hyper-chlorinated pool in favor of resting his eyes in anticipation of the long day awaiting him the next morn. His group of fellow explorers is not as forward-thinking and instead exhaust themselves in pursuit of aquatic fun and greasy pizza. Jerome wisely keeps his criticism to himself and, soon, it is time for lights out. 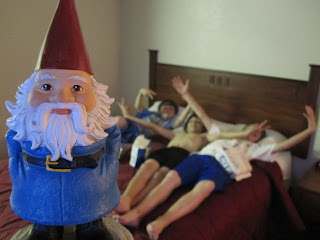 Early the following day, Jerome boards the school bus for the tour of the National park. He pats himself on his shoulder for avoiding the bus the previous day. 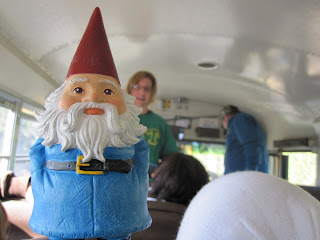 Once inside the Park, Jerome and his group begin their explorations of the ruins, learning invaluable lessons as they study the architecture, history and culture of the ancient people. 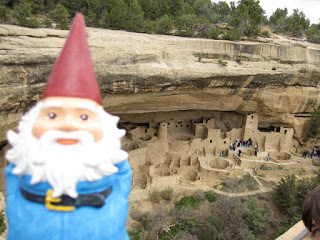 While on the trail, Jerome is careful to keep a close watch for poisonous snakes, creatures he has been led to believe he might see by one of the women in his group although; the man in his group says that the woman is being ridiculous and that no snake in it's right mind would be out in the cold. Jerome has learned much in his travels but nothing so important as the fact that it is always better to be safe than sorry, thus the continued wariness of reptilian encounters. 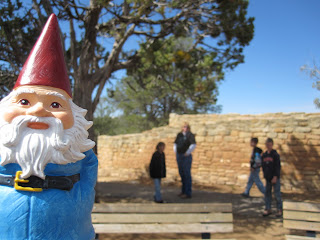 Jerome also knows that the key to enjoying a field trip of this magnitude is obeying the rules and being respectful of the other people with whom he is sharing the adventure. Unfortunately, there are a few fellow adventurers on the trip who disregard this basic principal yet, while the woman in his group suggests the possibility of corporal punishment for the few, Jerome wisely abstains from offering an opinion on the matter. Plus, as his hands are molded to his sides, he hasn't much to offer in the way of assistance in the event that corporal punishment is applied. He does, however, mentally endorse the use of a looooong Time Out for two of the most eggregious offenders.

After a long and industrious day, Jerome wearily climbs back into the car for the ride home, wiser, and more educated than ever before.

What adventure awaits the gnome on his next outing? Only time will tell.
Posted by Chelle at 9:08 PM