Friday Flashback: You Know What They Say About Prom Night 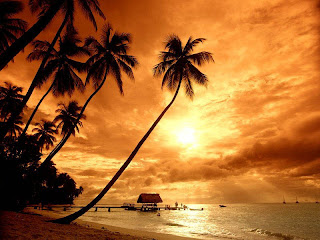 Our local high school is gearing up for the Prom this weekend. All over town, teenagers are picking up corsages and rented tuxedos and scheduling limousines while their poor parents’ minds boggle at the prices. Despite the cost, girls are jockeying for appointments at the best salons and boys are stocking up on Trojans because, only the best will do for Peggy Sue on Prom night.
And, we ALL know what happens on prom night, wink, wink, nudge, nudge.
Of course, not everyone loses their virginity in the backseat of their boyfriend’s dad’s Rambler; taffeta skirt pushed up around their neck and pantyhose dangling from one foot following a romantic evening of watered-down punch and awkward slow dancing forever immortalized in a photograph taken in front of the world’s fakest sunset.
I certainly didn’t (swear to God, Dad) but, let’s talk about prom night, anyway.
The first prom I attended was at our rival high school and I attended it with the son of my parent’s friends. As a sophomore, I was banned from attending our high school’s prom based on its policy of inviting juniors and seniors exclusively but, since the graduating class of the rival school numbered only thirteen students, they were a bit less stringent in their regulations. I wore a borrowed dress that was burgundy in color and my date wore a silver tuxedo with a burgundy bowtie and cummerbund. We were styling, I assure you. Of course, there was no romance that evening; I was with a guy I had known practically since birth and in whom I never harbored a romantic interest whatsoever. Plus, I had only agreed to go with him to make my ex-boyfriend jealous.
It was high school, remember.
My second prom night was my favorite. It was my Junior year and I was dating The Boy. He was a senior and as handsome as he ever was or, will ever be. My dress had been handmade by a local seamstress. It was dark blue taffeta with an iridescent sheen that flashed green in some lights and purple in others and, while that description probably sounds ugly, I assure you; it was quite beautiful. In addition to its unusual color, the dress featured a ballroom skirt under which I wore a somewhat largish hoop (hello, 1986). The best feature of the dress, however was that it was backless save for three tiny white bows that formed the closure that held the whole thing together; hella sexy and terrifically scandalous for my small town high school.
The Boy wore a white tuxedo with tails, a blue cummerbund and bowtie and his ostrich skin cowboy boots and, when he came to the door in that tuxedo, corsage box in hand, I actually held my breath; he was just that handsome.
The prom was held in our high school cafeteria which had been decorated in a fantasy theme, the specifics of which totally escape me at present. The Grand March was held in the gymnasium and I do remember that we had to walk over a small bridge with a fake stream running below. After we were introduced over the PA system and had made our way down the fake cobblestone path, we were supposed to pause momentarily on the bridge so that the million and ten parents in the audience could take pictures. When it was our turn to face the parental paparazzi, The Boy instead turned to look at me. A piece of hair had come loose from my elaborately styled up-do and he brushed it away from my cheek and said; “You are so beautiful” then, he winked at me, our secret signal for “I love you”. My heart stopped beating and I thought, in that moment, that I would never love someone else so much in my entire life.
The fact that I was wrong about that doesn’t diminish the memory for me in the least, by the way.
At just that moment, one of my friend’s mothers snapped a picture that would become one of my favorite photos of us together. (That same photo would be eaten by the flames of a ritualistic cleansing fire six years-and numerous break-ups-later. And, I digress.)
Later that night, after dancing under twinkling lights and posing for the requisite picture in front of the fake sunset, we changed into more comfortable clothing and joined the rest of our classmates at a campground several miles outside of town. We toasted marshmallows and drank beer which, back then, you were allowed to do when you were eighteen (or, when you were seventeen and were with your eighteen year old boyfriend although, you probably had to realllly read the fine print of the law to know that part). We listened to music, talked about our plans for life after graduation and cracked a few tasteless jokes. As morning arrived and the sky turned from inky black to royal purple to rose and then to gold, the crowd thinned. Two by two our friends disappeared into tents and cars to fulfill, finally, the Prophecy of Prom Night.
The Boy and I stayed near the campfire to watch the sunrise however and, just as it crested the ridge of the neighboring mountain range, he turned to me, again brushing a stray piece of hair from my face, and said “Thanks for going to the prom with me.”
Then we had sex (Sorry Dad).
Posted by Chelle at 8:42 AM