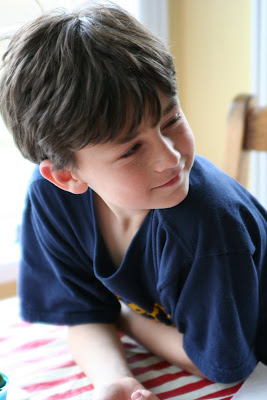 I think what he’s saying is; only two more days until we go on the school field trip to Mesa Verde but, he’s eleven and, for all I know, he is playing the part of Nostradamus today and predicting the end of the world in a fiery explosion, an explosion that will occur in only two more days canyoubelieve it?!
So, yes, the child is excited. I think Hugh might also be a bit excited; he already packed the Camelbaks, made a list of grocery items for me to pick up at Sam’s Club, attended the official chaperone meeting (and got the t-shirt) and he has memorized the entire two-day itinerary provided by the school.
For my part, I have vaguely flipped through pictures of the year we accompanied The Teenager on the trip and made a mental note to pack ibuprofen.
On a related topic, the Man-Cub’s Boy Scout troop is planning to attend an event called the Spring Thaw next weekend. Apparently, it is a tent camping trip and it is a requirement that a parent accompany each Scout. Hugh is totally taking this one because, I don’t do anything that involves the words tent and thaw in the same sentence. Tents are for armies and thaw indicates one degree above freezing, neither of which registers high on my to-experience list for this (or any) decade. Now, throw an event with the words beach and hammock in it and I am totally your girl.

I’m a delicate flower, canyoubelieveit?!
Posted by Chelle at 10:33 PM