Oh. Em. Gee. The Teenager Has a Boyfriend

And, while this is a relatively new occurrence and probably not worth getting the wedding registry ready or anything; she does appear to be smitten. In a totally Junior High-first-boyfriend- kind of way.

I remember that feeling; his name was Doug Schroeder and, when I hung out in the halls with him I was totally 2 Cool 4 Skool and all that jazz.

Back to the point; I met the young man today at The Teenager’s first track meet, where, by the way, she and her relay team took First Place, and, where the boy in question took First place in the mile run.

He was very polite, this new friend of hers; he introduced himself to me, shook my hand, made idle chit-chat while The Teenager waited for the earth to open up and swallow her and, he even graciously allowed me to photograph him (so Hugh will have a photo to use in the unlikely event that he must track him down and kill him). I’m hoping the relationship stays casual and unfettered by hormones and that he continues to be a nice young man until the spark inevitably fizzles out (or, until Hugh has to kill him).

In less exciting news (depending on your point of view), the Dish Guy showed up at the appointed time today and we now have 280 channels of television goodness.

And, I have a sunburn which has absolutely nothing to do with anything else but, the sting of it does take my mind off the fact that my daughter is crushing over a boy who can run faster than my husband. 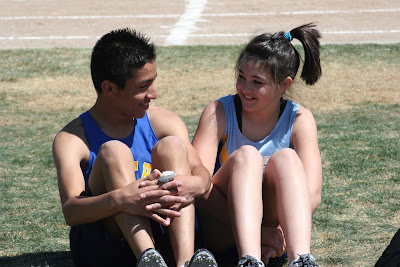