It’s the Porch Equivalent of Being Locked and Loaded 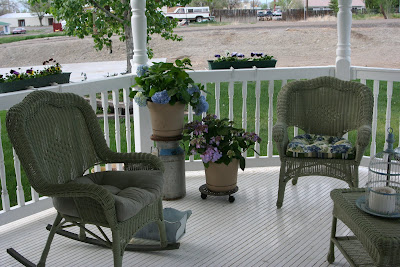 If Friday felt like a sprint to the finish line, the rest of the weekend was a marathon. After we recovered from the excitement of Continuation and the man-Cub’s first baseball victory, there was much work to be done on the home front and, while I’d like to say that the children joined me in my chores, I would be lying, instead; I found myself alone in the garden while the Man-Cub went on a sleep-over and The Teenager barricaded herself in her room, engaging in long text-message conversations with her friends. I didn’t mind; I like the peace and solitude of gardening alone and I accomplished everything that I had on my To-Do list. I purchased and planted peppers, tomatoes, cucumbers and several varieties of squash, including four butternut squash seedlings because, this year, I will not be defeated by the butternut. Oh, no, I will not be defeated.

Once the vegetable garden was planted, I potted three flats of pansies and two huge hydrangea plants. Then, I cleaned the front porch, organized the wicker, fluffed the cushions and filled the hummingbird feeders. I am officially ready for our first Porch Night.

Not coincidentally, the Man-Cub and The teenager’s last day of school are Thursday and Friday, respectively. To say that they are looking forward to summer break would be a vast understatement and I’m more than a bit concerned that they are each eyeballing the porch for their own entertaining purposes.

Luckily, I am the parent here and I totally call dibs. Also, place-backs on the good recliner, just in case anyone gets any big ideas.