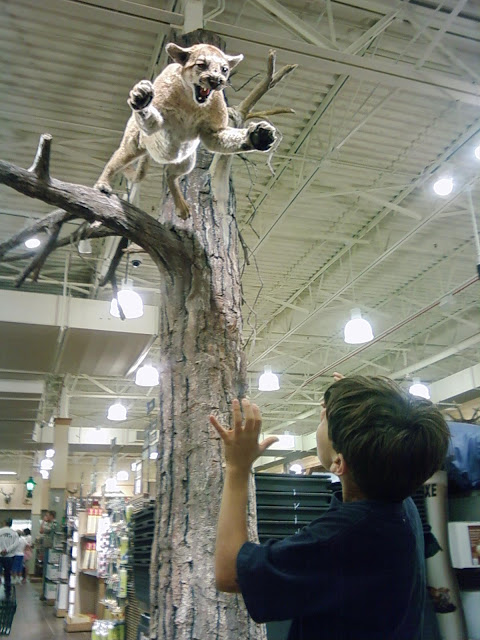 Lucky for her, she was on horseback and her horse was faster than the cat. As it is, this picture was taken during the Never-Ending Afternoon that Hugh, the Man-Cub and I spent in the brand new Cabelas that recently opened in Neighboring City.
And, the next time that Hugh volunteers to join me on my Sam’s Club run; I am totally going to know better than to say “Sure, hon! It’ll be great having company!” because, my ass will inevitably end up in the Bargain Cave, searching for a helluvadeal on fish finders or binoculars or power bait or some such other decidedly non-girlie bit of paraphernalia.

On the bright side, I did manage to sneak away from the men folk (their attention was on a tree stand display) for a quick jaunt to Victoria’s Secret; a diversion which proved successful in washing the stink of testosterone right off me and I had the opportunity to spend ten minutes with one of my college roommates whose husband had dragged her all the way from the town of our alma mater (Three and a half hours away) to accompany him on his personal pilgrimage to “the greatest outdoors store in all the world” (the Man-Cub’s quote, not mine) so; I really came out ahead when you think about it.

Hey, speaking of bullets, did you know that you can get a helluvadeal on ammunition at Cabelas? Well, now you know. and, if a mountain lion ever tries to eat your niece, you'll be totally prepared to defend her life.