The Teenager had a little accident earlier this evening; she, her boyfriend and another friend were playing in the drive-way when the friend misjudged a scooter stunt and nailed The Teenager in the face. With the scooter.

In case you’ve always wondered what the end result of taking a scooter to the face looks like, allow me to enlighten you. 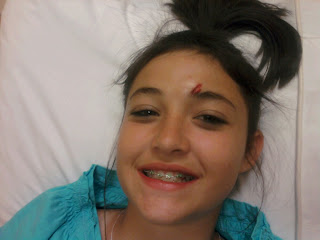 ]
On the bright side, the emergency room visit and seven resulting stitches means that we totally recouped our Aflac premium for the past six months.

On another bright note, I got to see, first-hand, how The Teenager’s boyfriend handles emergency situations involving gaping wounds; he held his hands over the gash to staunch the blood while dancing around saying something along the lines of “Oh, crap! Oh, crap! Oh, crap!”

If he can bring himself to hold her hair back while she pukes, he has real long-term boyfriend potential; we’re talking college, here.
Posted by Chelle at 8:10 PM