Hugh, the kids and I spent our entire 4th of July weekend on the lake. Despite his arm being in a cast, the Man-Cub managed to swim, fish and to ride the tube without any trouble whatsoever while I, without any injury of which to speak, managed to fall on my ass yet again. 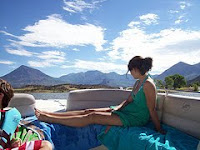 The boat dock, it is my nemesis. On the bright side, this latest spill was a lot less spectacular than the last and, I have no new bruises to show for it.
When I wasn’t making a spectacle of myself by falling down like a drunk (full disclosure: not drunk. Sadly, totally capable of falling on my ass while stone-cold sober), I was making a spectacle of myself by squealing like a three-year old while driving the boat. In my defense, the State park we were visiting features a much smaller lake than I am used to plus more boaters per nautical mile of said smaller lake and a greater number of boaters who in no way, shape or form appear to understand the rules of the water nor to possess any form of boating etiquette. You would have squealed like a three-year old when a large boatful of drunken Independence Day revelers veered into your lane of traffic, too. Or, maybe you wouldn’t and that, my friend, would make you a braver soul than I. 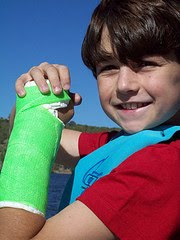 Screaming aside, I did manage to pilot the boat well enough to drag Hugh and The teenager around the lake approximately a billion times, and while I tried with all my boat-driving skills; I managed to knock them off the tube only a handful of times. One time, however, the result of sending The Teenager skipping across the surface of the lake was a de-pantsing of her bikini bottoms, leaving a full Teenaged moon glowing up at us from the surface of the water. Unfortunately, it didn’t embarrass The teenager nearly enough to suit me and, I’m not ashamed to admit; I tried in vain to repeat the trick for the remainder of our time on the lake.

Mother of the Year, you heard it here first. 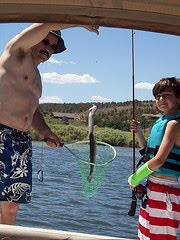 The parts of our holiday weekend not spent on the water were spent grilling steaks, BBQing chicken and cooking the two fish that Hugh caught (on one hook! At the same time! Have you ever heard of such a fantastic feat?! Chelle, get the camera! Quick!!). We also watched Hugh set off the $300 worth of fireworks that he bought at the local fireworks stand and, no, that is not an exaggeration, three hundred dollars. American. I swear, some days I have to close my eyes and chant reassuring words about how much I love him to myself over and over and over again.

On the other hand, he did spent a similar amount on season tickets to the local community theater just because I felt the need to introduce a little culture into our lives so, yeah; I guess I can overlook his need to pay gobs of money on stuff to blow up once a year.

Isn’t that big of me?

I’ll be adding the trophy for Wife of the year to my mantle any day now.

When the last of the exploding fountains had spewed it’s final spark, the exhaustion of a busy weekend caught up with us and we all fell asleep in the living room while watching The Crazies.

I can think of worse ways to celebrate our independence.
Posted by Chelle at 8:04 PM