The Man-Cub got his permanent cast yesterday although, permanent is a misnomer considering the fact that he only has to wear the thing for three weeks. Three weeks. The last two times he broke his arm he was in a cast for a full six weeks (five if you count the year that Hugh cut the thing off early so the Cub could ride a freaking roller coaster with him); three weeks seems a tad bit short to me but, despite my diploma from The Google School of Medicine, I’m no doctor. So, yeah, three weeks it will be which; means the Cub will be free and clear for both Disney and Stampede. Hugh’s roller coaster-riding buddy will be completely at his disposal.

Also, since the cast is 100% waterproof, the Cub has been cleared to swim this weekend at the lake. This delighted him in ways I cannot express. Also, the color of the cast made him especially happy. 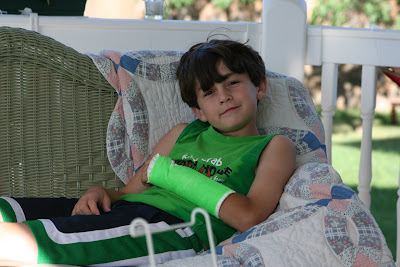 Fluorescent green. Or, is neon green? I’m not sure.

You may recall that the last cast was also green, although less eye-searingly so.

The cast before that was purple. And, tiny. 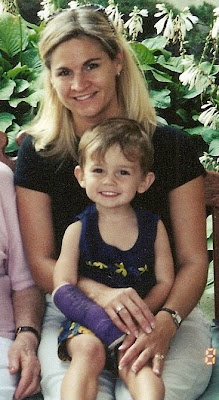 Not tiny? The Man-Cub’s head at age three. Seriously, he could have been the original model for the Bobble-Head. Happily, he has grown into that Charlie Brown head-which he inherited from his maternal grandfather-quite well and, as his grandfather would tell you; all brain, it’s all brain.

Let’s hope he uses all that gray matter to keep himself from getting broken again anytime, soon, shall we? Because I think they are running out of cool color options for casts.
Posted by Chelle at 9:31 AM