Last Friday, two young girls came into the hardware with a basket of kittens. They were on a mission to give the kittens away and had strict orders not to return home until their basket was empty. Because I clearly have the word sucker tattooed on my forehead in neon blue indelible ink, I was a perfect target for the girls and, because they made a phone call to their mother while in the store, wherein they were told that, any kittens brought home with them would be chopped up and fed to the fishes; I was no doubt the easiest mark they had ever met. 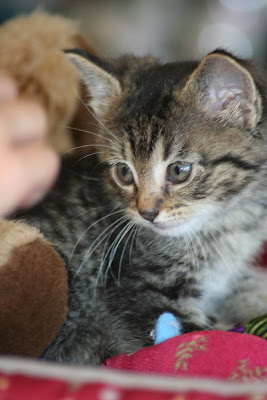 So, yeah, please meet Otis, the Hardware Store Cat.
And, yes, that is his majesty's royal title.

In my defense, I have wanted a good mouser for the store since the time that a mouse, gasping its’ final breaths after chowing down on the De-Con buffet, paused in its imminent demise long enough to sit at my feet and stare me down like, why woman? Whyyyyy???

I would much rather have a cat that chases the mice away than to face the accusatory stare of another dying rodent. Plus, Otis is freaking adorable and, he already loves the store, the people who work there, the customers, my children and, of course, me.

In non-sucker kitty adopting news, on Saturday, I took the kids to Neighboring City for a school clothes shopping excursion but, not before taking great delight in torturing my daughter at a carwash that her school club was doing as a fundraiser for their upcoming trip to Washington D.C. and, while I am on that topic, if she can wash a car as well as she washed the ones at the carwash, why can she not manage to clean the shower in her bathroom with the same precision and conscientiousness?

Oooh, something else of note; as The Teenager and I were perusing the Victoria's Secret for bras that didn't feature enough padding to add four extra cup sizes to her girlish bosom, we watched a man hold up a pair of panties from every drawer in the store. He examined each pair rather thoroughly, held each pair up to his nose and sniffed it before placing it back in the drawer. The Teenager and I locked eyes across the store and I'm pretty sure we were both thinking the same thing which was; what the fuck? Although, The Teenager was probably thinking what the heck because, I'm not raising a potty-mouth here but, seriously? What the fuck?

So, yes, after returning home and generously dousing our mind's eyes with Clorox, The Teenager went about putting away her new clothes and I cleaned out my closet and drawers, replanted some flowers that have died courtesy of our recent heat wave, trained squash plants over the fence in the garden and made dinner before dropping the Man-Cub off at a sleepover. Then, Hugh, The Teenager and I went to the movie theater to watch Grown Ups which is quite a funny movie, six enthusiastic thumbs up.

And, that was pretty much it for my weekend so, I leave you with this; 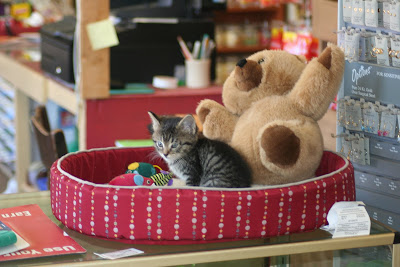 A picture of Otis, the Hardware
Store Cat, because I am sweet like that. And, I have about eight million of them, already.

Also, I am a total sucker for girls bearing baskets of kittens but please, let's just keep that between ourselves.
Posted by Chelle at 8:47 AM