I checked the garden this morning and, not only did the insecticidal soap not kill the rest of the squash bugs but, I’m, pretty sure they absorbed it like radiation and are now bigger, faster, and stronger than ever before which beats them rising from the dead in search of braaaiiinnss but, not by much.

In conclusion, the organic approach isn’t working and it is now time to go nuclear on their asses by way of Sevin Dust; let’ s hear it for the scorched earth policy!

In other news, tomorrow is the annual Sweet Corn Festival and, as I’ve mentioned, I will be attending as a volunteer accountant. Yesterday, the chief of police dropped off my official parking pass, all-access pass and the t-shirt that I will be required to wear and, it is, yellow. Very, very yellow. For the record? Yellow is not in my color pallet.

The things we do in the name of charity.

On another note, my Dad got some good news today; his medication and the recent adoption of a healthy diet have combined to effect a twenty pound weight loss, resulting in the cancellation of the surgery he was scheduled to have on Monday. No new stents for at least three months and, assuming he keeps up the good work, no new stents, ever.

I’m proud of him, and not just because he has embraced turkey bacon. Ok, that’s a lie, he will never embrace turkey bacon but, he’s trying, he’s really trying.

Speaking of trying, I’m still in the process of packing for our trip to Florida. We leave Sunday morning; I’m estimating my packing to be complete by Monday. I realize that doesn’t exactly align accordingly but, what can I say?

Also, have I mentioned that I hate my wardrobe?

Or, that the squash bugs in my garden will. Not. Die?

On the other hand, it could be worse... 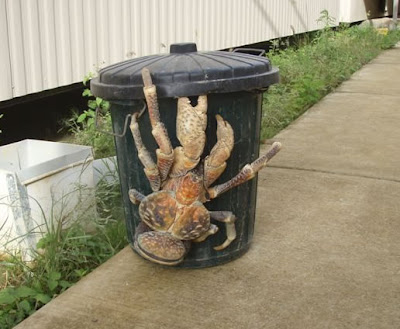 Boy, do I feel sorry for the garbage man who has to wrestle the can away fom that bastard. I mean, what the hell is that? What if that's what I have to look forward to following my attempts at the scorched earth policy?

Google Images scares the living shit out of me.
Posted by Chelle at 5:32 PM