The Things We Kill For

I’m a pacifist by nature, I cried when a hunter killed Bambi’s mother, abhor violence against women and children and, I’m the last person who would find entertainment in ultimate fighting or anything of that ilk.  While I do admit that I would totally kill a chainsaw-wielding maniac threatening my life or the lives of my children; I’m really quite docile, normally.

So, when I went all hari-kari on a small nation of mostly innocent creatures this evening, I surprised even myself.

Perhaps I should explain; as many of you reading this know, I am a nut for butternut squash soup and I have been trying for the past two years to grow enough of the gourd to keep me in the golden, delicious nectar for the entire winter. Last year, my efforts were thwarted by a mislabeled plant; causing me to unwittingly plant a spaghetti squash in place of a butternut and, although one lone butternut resulted from the two (one) that I planted, it was hardly big enough to cook into a soup.

This year, I was extra diligent in ascertaining the botanical specimens planted in my garden, which is why I am 100% positive that I am, indeed, growing butternuts. And, growing them I am; six at last count. 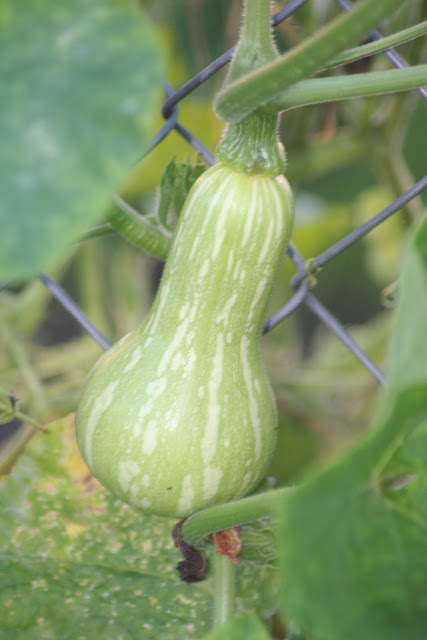 Unfortunately, my efforts are again in jeopardy due to a sudden infestation of these little bastards... 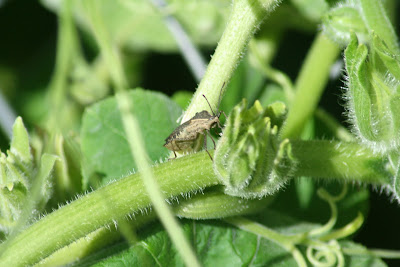 I noticed the infestation yesterday, courtesy of a number of dying leaves on the previously healthy plants. Upon closer observation, I discovered a plethora of bronze eggs on the underside of most of the leaves on one plant and many more on another. Wondering what the eggs were, I leaned in for an even closer look and came face-to-face with this 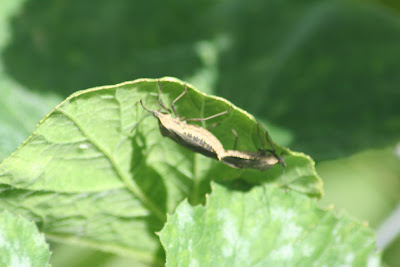 Not only are the little bastards squatting in my garden but they are fornicating. Like, a lot. And, the fruits of their labors are too numerous to count, in fact, I think the little fuckers are even more prolific than the Duggars, you know, relatively speaking.

So, this evening I attacked the garden with gloves and a bucket of soapy water, pinching as many of the little bastards as I could catch between my fingers before drowning them. Then, I stripped the egg-ridden leaves from the plants and tossed them in the compost bin where, in all likelihood, the eggs will steam to a nice hard boiled stage.

As I was doing this, I witnessed a mass evacuation of juvenile bugs; we are talking gazillions of the little bastards fleeing my presence like kids escaping the fuzz at a rave. Unfortunately, this indicates that a vast majority of eggs have already hatched and confirms my worst fear; that my butternuts may very well be fucked.

On the other hand, I doused that entire area of the garden with insecticidal soap with as much enthusiasm as a psycho killer wielding a flamethrower and, maybe, just maybe, the assholes will all die. Die, I say, die!

Of course, with my luck, they will then rise from the dead, zombie-bug style and murder me in my sleep for revenge.