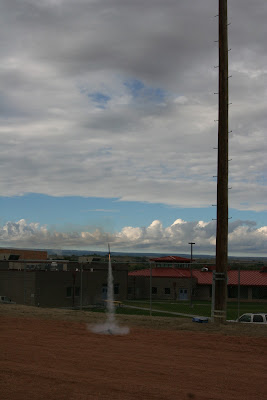 This morning Hugh and I accompanied the man-Cub to school where we had the pleasure of supervising him and two of his classmates as they worked on their project for the upcoming Middle School Science Fair.

It was nice to visit the school without a stop in the Principal’s office and without hearing the words In School Suspension or After School Detention and, the science project was cool, too; the boys shot off a rocket that the Cub had built, painted, wired and christened with the name Bob. Seriously, Bob.

Bob proved to be quite the over-achiever, zooming into the sky until he was out of sight and then not making his descent for a solid minute and a half which is damn good hang-time. Tomorrow, we will be back in the science class to supervise the boys as they set off a Mentos rocket which, apparently has something to do with Mentos candy and a bottle of soda pop. The boys have hypothesized that engine-propelled Bob will have flown higher than the Mentos rocket and, I think the word you are looking for here is duh. 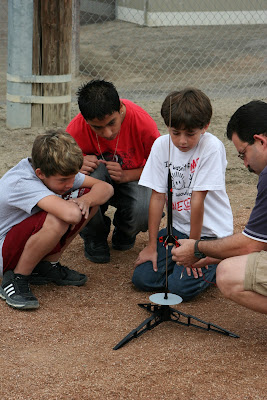 Anyway, as I said, it’s a nice break from visiting the school for disciplinary purposes and, the look of excitement on the boys' faces during the countdown from 10 to 0 was worth the price of a package of Mentos and a 2 liter any day.

In other school news, it is Spirit Week at the Middle School. Today the kids were encouraged to dress up as a character from a fairy tale, a feat at which we failed miserably, and by we, I of course mean me; I just could not come up with an idea for a costume that didn't involve fairy wings, tights or a tutu and, well, Hugh draws the line at dressing his son like a fairy, anyway. It's ok, though; tomorrow is Fake Injury Day and, with three old arm casts at his disposal, the Cub is all set. Then, on Thursday, when the school celebrates 80's Day; I have gone to great lengths to provide him with a passable Sonny Crockett costume, white linen suit jacket, pants and all the best that Miami Vice had to offer, except for the bitchin' speed boats. Friday, for Hillbilly Day, I'm simply going to encourage the Cub to dress himself in whatever outfit he would normally chose for the day only, I'm not going to intervene with suggestions for things that might a) match better, b) fit better or, c) don't look as though they have been worn by children working in a coal mine and, wa-la! Insta-Hillbilly.

It's not rocket science after all. Ha! See what I did there? Rocket Science? That's called remaining on topic.
Posted by Chelle at 7:58 PM