The Freshman class float placed first in yesterday’s parade which didn’t surprise me in the least since it featured a giant volleyball made of chicken wire and napkins. A giant volleyball, people. 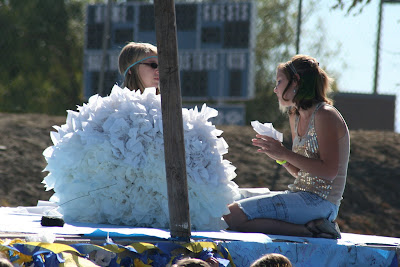 The football team then trounced the competition at last night’s big game; a Senior whom The Teenager is quite fond of was crowned Homecoming Queen and all three of the girls’ volleyball teams won their games without breaking a sweat.

It was a productive and victorious day.

Tonight, The Teenager and her friends will attend the Homecoming dance. The girls are coming over to the house to get ready for the event and then I am taking them all to town for a nice dinner. Wait, allow me to clarify; I am dropping the girls off at a nice restaurant for dinner at which point I will magically disappear, reappearing only to chauffeur them to the dance after their meal.

Then, after the dance, I will pick them up and deliver them all back to their respective homes before my Tahoe turns into a pumpkin.

How in the world did I ever think that I could get away with attending Grease in Denver this weekend?
Posted by Chelle at 9:03 AM