School's out for summer.

The Teenager celebrated by bringing a dozen of her closest friends home for a Wii marathon prior to the meeting of our ASTRA club which was attended by most of it's twenty-seven members so, when all was said and done; we had half the Freshman class on the front porch, in the house and in the backyard.

Oh, excuse me, we had half the Sophomore class on the front porch, in the house and in the backyard. Sophomores, already. Gah. Good thing they are so mature and all. 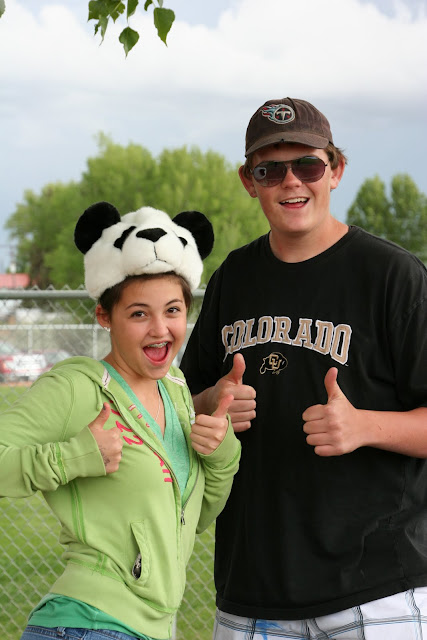 Anyway, the Man-Cub was equally excited about the last day of school although, for entirely different reasons or, more specifically, for one reason in particular; he was planning to elicit a kiss from his little girlfriend. Unfortunately for the little Lothario, his girlfriend was taken ill and had to leave school early, leaving the Cub's lips in the lurch.

Yes, I'm totally bummed for him, too.

But, yes, summer! I'm looking forward to the combined scents of sunscreen, food cooking on the grill, blooming flowers, fresh fruit, campfires and smores as well as to the lazier pace we seem to keep during the days that don't begin with a trip to the school drop-off lane. In fact, just the thought of skipping the drop-off lane makes me giddy enough to don a panda hat, myself.