How Do You Feel About Seefood?

Friday night, while dining at our favorite Chinese restaurant, Hugh and The Teenager engaged in their usual father/daughter banter, banter that almost always ends with some sort of crazy dare or bet and; that night was no exception.

The bet? That The Teenager couldn't eat two pieces of sushi of Hugh's choosing. If she somehow manged to choke down the sushi, she got to paint Hugh's fingernails in the color of her choice and he would have to wear the polish for at least a full day.

Believe it or not, this is actually one of the most benign of their bets, especially when one takes into consideration the fact that we now have to find a reputable tattoo parlor/piercing salon in which to have The Teenager's bellybutton pierced thanks to the whole "If you stay on the Honor Roll for the entire year, you can get your bellybutton pierced" fiasco that Hugh blindly entered into last summer. On the one hand, yeah, Honor Roll, all year long. On the other hand, well, obviously and, I digress.

So, a bet was sealed with a handshake and this followed...


Because she manged to fulfill half the bet (she managed to hold down one piece of sushi prior to The Barfing), The Teenager convinced Hugh to hold up at least that much on his part which is how his left hand came to look like this... 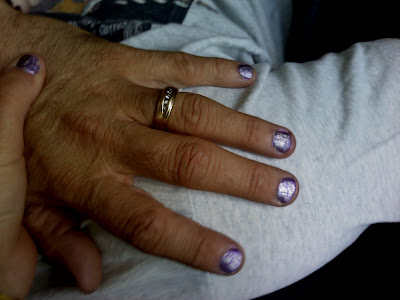 As an aside, aren't you glad you aren't the family that gets to sit next to us at the Chinese restaurant?
Posted by Chelle at 8:36 AM