Meanwhile, Back at the Ranch

While I was away on my Girls' weekend (did I mention that I was on a Girls' weekend? With, like, the best girlfriends in the world? Yes? Alrighty, then...); exciting things were happening on the home front. For starters, The Teenager had her first, ever, job interview.

I felt a bit guilty for not being around to provide moral support, but; Reese and I tried to make up for it by mock-interviewing her the night before we left. We also made her put on the business suit that she planned to interview in so that we could inspect her look; an important thing to consider since the job for which she was interviewing was at a retail clothing store.

The outfit was perfect, of course.

And, from what I understand; the interview went well. The Teenager should hear back before the end of the week, so; fingers crossed.

Then, while The Girls and I were hiking around a lake, solving the world's problems, the Man-Cub's baseball team was busy winning their game. I was a bit sad to have missed it, but; those problems weren't going to solve themselves, now, were they?

The most exciting thing that happened when I was gone, though, had to be the attempts my family made at socializing a new kitten into our household. See, last week, when the Man-Cub and I were at the big box pet store; we happened to meet (and sort of fall in love with) a nine-month old kitten. 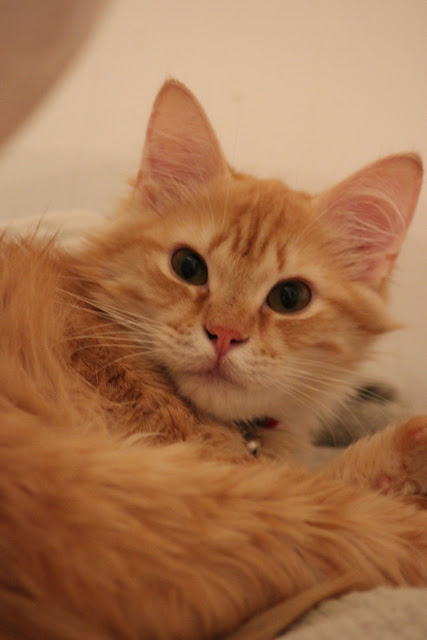 And, yes; I do realize that I might just have a weakness for the gingers. I can't help it. Anyway, Hugh brought the new kitten home the day before I left for the cabin. This is the first time we have had a kitten that was more than six weeks old join our family and it has been a learning experience, to put it mildly. Not to worry; Finnigan seems to love him and, I have high hopes that he will learn to love Finnigan... eventually.

For now, we are segregating the two and working on bringing the baby out of his shell. Since his temperament is already quite reminiscent of Gilligan, I think we will do just fine once we work out the kinks.

And, I think that about covers the Back on the Ranch segment of today's post. You are welcome.

Oh, and his name is Guinness.

The kitten; I mean. His name is Guinness.

Like the beer, not the record books.For some reason, Hugh would like me to make that clear, in case you think that we would name a cat after a book or something stupid like that (yes, this is my life).