Where was I? Ah, Halloween 2001. The second year that I busted out with the mad sewing skilz only, this time, the whole family was cursed by lucky enough to benefit from my labors; we went as the characters from Snow White.

The Girl was an impressive Snow White (I managed to get her back seam straight but, the inset sleeves on that costume were a bitch) and, at the tender age of three, the Man-Cub was hardly in a position to complain about being made to portray Dopey. 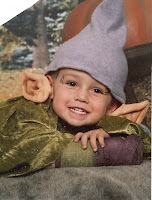 Yes, Dopey. In my defense, Dopey is my favorite of Snow White’s dwarves and, honestly, the one the Cub most resembled. And, if you tell him I said that I will deny it, vehemently. I should also point out that this was the first in a series of years that the Cub was broken in some way, shape or form on Halloween; this time it was his first broken arm, courtesy of the playground slide. Luckily, the cast matched well with the colors of the costume. Like that mattered.

As I was saying, the whole family got into the act that year; I took it upon myself to go as the Evil Queen and, did a damn good job of it if I do say so, myself.

Hugh was totally type-cast; he was Grumpy. But, the fact that he donned that costume and sat in a teeny-tiny little chair at an equally teeny-tiny desk making spiders out of egg cartons and pipe cleaners as twenty-four Kindergarteners looked on, is one of the million and ten reasons that he is the perfect man for me. 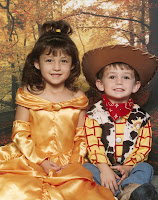 Flash forward to the next year, Halloween 2002. Once again with the sewing skilz except, you can tell I was burning out on the whole thing because, while The Girl’s Belle costume is hand-sewn, the Man-Cub is attired head to toe in discount Disney Store. My only excuse is that the dress took approximately one billion years to sew, what with the crinoline underneath and the ruffles and shit-I was exhausted. Plus, the Cub made an adorable Woody the Singing Cowboy and I was not about to attempt that costume on my own so, there.

Please do tune in next week when we enter the exciting world of BUT I WANT TO PICK OUT MY OWN COSTUME, MOM.

I’m still trying not to take that one personally.
Posted by Chelle at 8:16 AM