The first in a three-part series on the kid’s Halloween costumes throughout the years; thrilling, huh? Hey, I warned you yesterday. 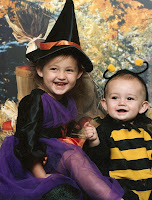 So, first up we have the bee-witching costumes the kids wore at ages one and three. For being only a year old, the Man-Cub made quite an impressive stab at the trick-or-treating thing. As I recall, I pushed him and Darren in the bike stroller while The Girl and Kaley walked with Jana-the first in a long line of times that we would all trick-or-treat together.

Next, the costumes the kids wore at ages four and two-my first stab at 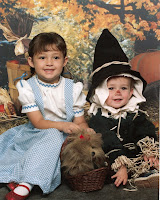 sewing their costumes. The Girl’s dress was sewn so crooked in the back, I practically ordered her to scoot backwards out of a room when making an exit.

Even still, I think this was one of my favorite years as far as the costumes went. My older sister and her kids were visiting that year and my nephew dressed as the Tin Woodsman and my niece as the Wicked Witch of the West. If we had only had a handful of flying monkeys, we would have been complete and, awesome.

As it was, the kids were pretty damn adorable and we took all four of them to the local pumpkin patch for the day. Somewhere, I have pictures of it; I have no idea where they might be and that is going to slowly eat away at my will to live-until I find them, that is.

Speaking of things that eat away at my will to live; we have another football game today. The game doesn’t start until six but the coaches want us at the field at five so the kids can get in another practice-apparently, losing every game we play is unacceptable as far as the coaches are concerned.

Then again, who am I to talk; I made a four-year-old back out of a pre-school classroom because her seam was crooked.

Kettle? This is Pot; you’re black.

EDITED TO ADD: LOOK WHAT I FOUND!

My will to live is mostly intact. I had a lot more pictures of that Halloween but, apparently I scrapbooked them. Because I was waaay more efficient at keeping up with the scrapbooks back in my younger days.
Posted by Chelle at 8:14 AM