But, Where Is Otis?

This is a question that has been asked numerous times over the past couple of days. Customers at the hardware store have become accostomed to seeing our furry mascot lounging on the high shelf behind the cash register or lolling about in the front window. Children and old women, in particular, have bonded with the cat and make a point of cooing over him before going about their shopping. So, his recent absence has been very noticable.

At the vet, unfortunately.

Monday evening, Hugh came home and related some concerns about the way that Otis was behaving; he wasn't eating his treats and was meowing in an odd pitch.

When I went into the store Tuesday morning, Otis did not greet me at my office door, eager for his morning treats and chin rubbing. He was nowhere to be seen. Eventually, our store manager found him curled up in his litter box. Clearly, something was wrong.

Hugh took Otis to the vet immediately and we soon learned that he was most likely suffering from a bladder infection. The vet sedated Otis and started the process of flushing his system and checking his kidney function. Today, he is somewhat improved and we are hopeful that he will be able to go home, tomorrow.

In the menatime, he has the prayers of his Facebook fans and his friends and family at the store; not too bad for a professional mouser. 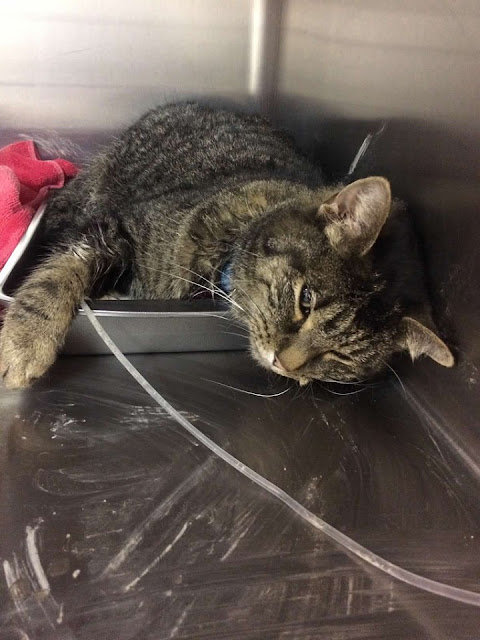 He's also on some realllly good drugs
Posted by Chelle at 10:27 PM