Santa Claus is Coming to Town

Yesterday, I had the pleasure of spending some uninterrupted quality time with the Man-Cub. We went Christmas shopping, which, probably wasn't exactly what the Cub would define as quality time, but, he made out like a bandit, so, I didn't hear him complaining.

After I had dragged him to three stores, we made a quick stop at the Hellmouth to pick up a few odds and ends. While we were there, I saw my friend, the Booster Club president, who happens to work in the store. Her duty for the day was to man a camera perched atop a tripod, taking pictures of....wait for it...kids sitting on Santa's lap!

The second the Cub saw the Big Guy, he turned on his heels and made a beeline for the electronics section like his ass was on fire, but, it was too late; his momma was on a mission, and that mission involved his ass sitting on Santa's knee, whether it was on fire or not.

As you may imagine, he was...reluctant.

I am not too proud to admit that I begged.

I pleaded with the kid for five minutes for just one last photo with Santa. Just one! He logically reminded me that he had, just the night before, refused to put his Christmas letter under his pillow; did I really think he was going to sit on the guy's lap?

And, I wasn't afraid to employ any means necessary to get my way. I reminded the Cub that, on that Christmas list, was a rather expensive gaming system, a gaming system that he desperately wanted and, finally, after promising to put in a good word for him with the other big guy (the one who controls the credit cards), the Cub sighed the sigh of defeat and... 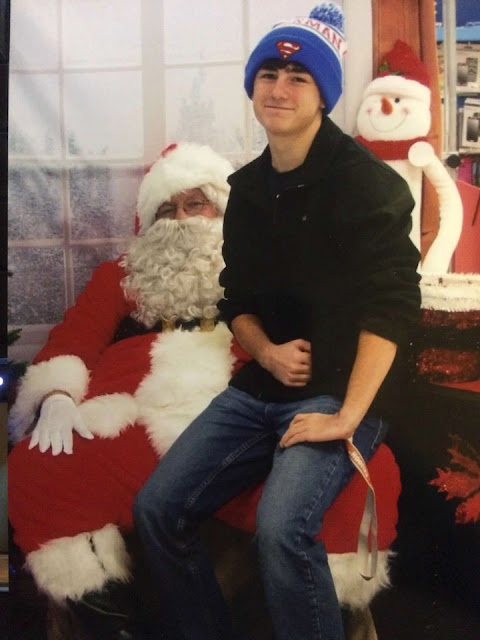 My life is complete.
Posted by Chelle at 7:04 PM