BCPE and I are hunkered down at my mom's house in Mayberry; we got here yesterday just in time for the boys' first basketball game of the season, which took place at a tournament held in a community about thirty minutes to the south. Unfortunately, the boys lost the game, but, not by much and not because they were out-skilled. The referees were a huge part of the loss, but, bitching about that makes us sound like sore losers, so I'll just say that we are hoping for more consistent reffing at today's game.

On the bright side, all of the Mom Squad made it to the game, so we got our first selfie of the (last) season, and that is a favorite for sure. 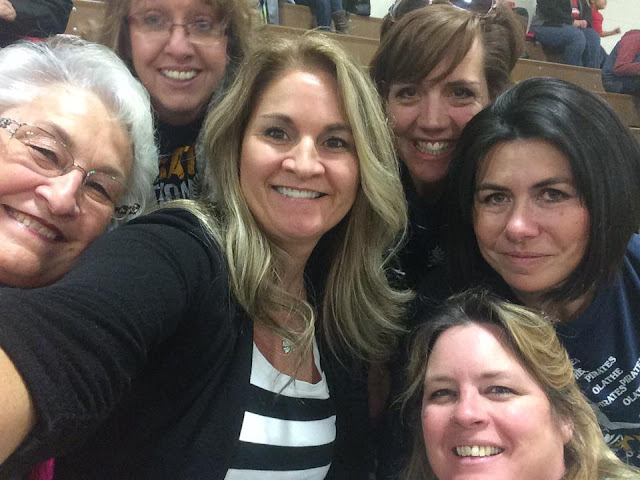 Also, Mom got to be a part of it, and, since she is a favorite of all the other ladies, that's a bonus.

We have one game scheduled for today and another for tomorrow, which means we traveled three hours for three games over the course three days. If three was my lucky number, I would be in heaven right now, but, it's not, so, it's a good thing that the girls' team is also here for the tournament so we will actually be watching six games over the three days. That makes the economics of traveling this far a little more palatable.

Oh, who am I kidding? I've traveled three hours for one game more often than not and haven't complained. The things we do for our kids, right?

Because our boys are our most favoritest thing of all (new word alert!)