Thursday morning, I went to the hospital in Hooterville to have my annual mammogram because it is Poke, Prod, and Pull Season here in Chellesville (mammogram, dental cleaning, and a pap smear, what fun!), and, while I've never generally dreaded the process, I don't exactly love it, either. I know, who does, right?

Well, after this particular experience, I may actually have graduated to dreading it just a teeny bit.

When I got to the hospital, I checked into the general boarding area and awaited my flight to Gropesville. The flight attendant on duty showed me to my seat and explained the particular features of the new machinery, which, is now capable of taking 3-D images of the 'ol bewbs. 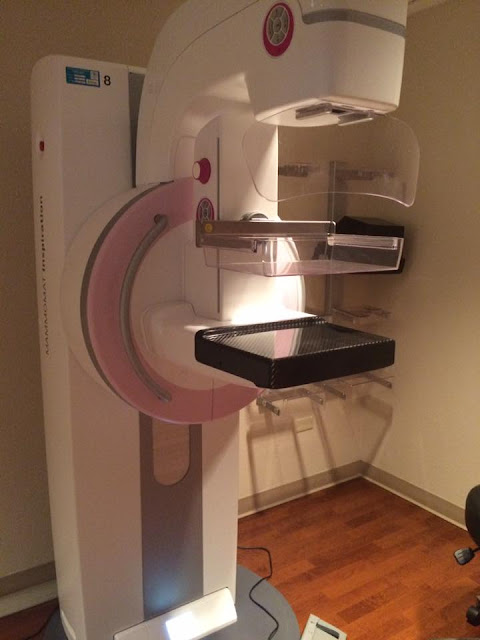 Then, she handed me off to the technician who would be piloting the plane, who, took one look at me and declared in dismay "Oh. You're wearing a dress.".

"Are you wearing a slip?"

"Ok...I have a cape...I'll have to get you a gown...just...just tuck in your underwear around your waist"

Because you're about to fondle my breasts in the most intimate way possible but looking at my panties may offend thee? Okaaaayy...

So, I slipped out of my (very cute, by the way) dress and swaddled my offensive lower half into the gown.

As expected, I was fondled into the machine, the positioning of The Girls requiring several adjustments and more than a little bit of "gentle" tugging. I'm used to that, though, so, no biggie.

The unexpected portion of the program came when the new machine required waaayyy more time to expose the bewbs to the imaging software. What used to take, like, ten seconds, now requires thirty; thirty seconds during which your delicate girlie flesh is flattened out to dimensions proportionate to that of a pancake served up at the local Ihop.

On the upside, they no longer require you to hold your breath, which, may have more to do with it being impossible rather than it being  some huge advancement in technology.

Anyway, the process, while absolutely necessary and life-saving, is now slightly more uncomfortable, and, not something that I am looking forward to repeating anytime soon, so, fingers crossed that my results are good, show no suspicious areas, and don't require additional images or a re-check any sooner than twelve months from now.

Also, note to self: Next year, wear jeans and spare the poor technician the embarrassment of checking out your undies; she's clearly not interested in learning Victoria's secret.
Posted by Chelle at 1:31 PM