Pardon yesterday's interruption, it seemed important to document Reggie's demise. However, we shall carry on today!

On the morning of our sixth day in Hawaii, Mom, Hugh, and I got up early, hailed a cab to Pearl Harbor, and grabbed a place in line for tickets to tour the Arizona Memorial. The tickets are free, and, they go fast; we got to naval base at 7:30 and our tickets for the memorial were time stamped for the 12:45 tour, so, if you are ever considering a visit to Pearl Harbor, you may want to try to reserve tickets in advance, if possible.

Since we had a lot of time to kill before boarding the ship to the Arizona, we purchased tickets to tour the USS Bowfin, which is a naval submarine that was commissioned exactly a year after the attack on Pearl Harbor. Dubbed the Pearl Harbor Avenger, she conducted nine tours of duty during the war, destroying a large number of Japanese ships, submarines, and shipping vessels.

The submarine was pretty interesting. I cannot imagine living in such tight quarters, let alone doing it while submerged under water, but, it appeared as though the sailors who manned the Bowfin were a jocular and enthusiastic crew, if the video footage shown in the adjacent Bowfin Museum was any indication. It was also the men who served aboard the Bowfin who lobbied for her to become a permanent part of the Pearl Harbor exhibits in 1986. 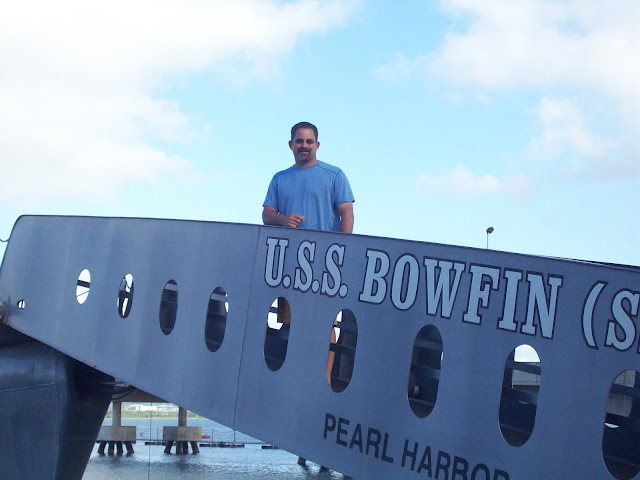 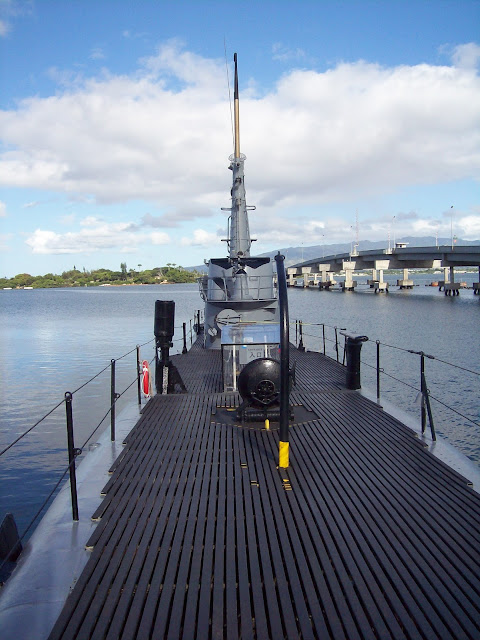 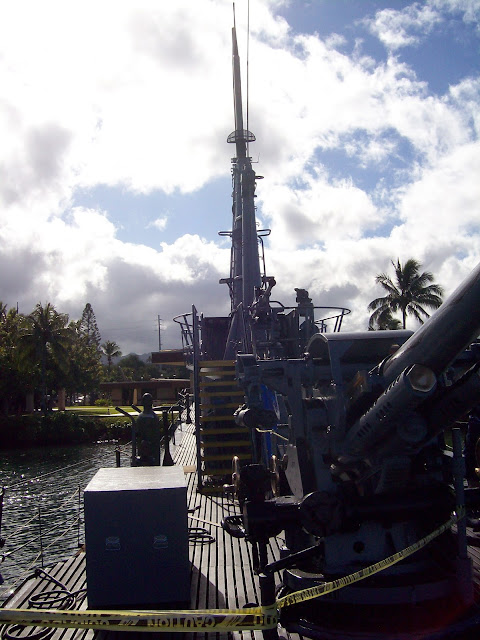 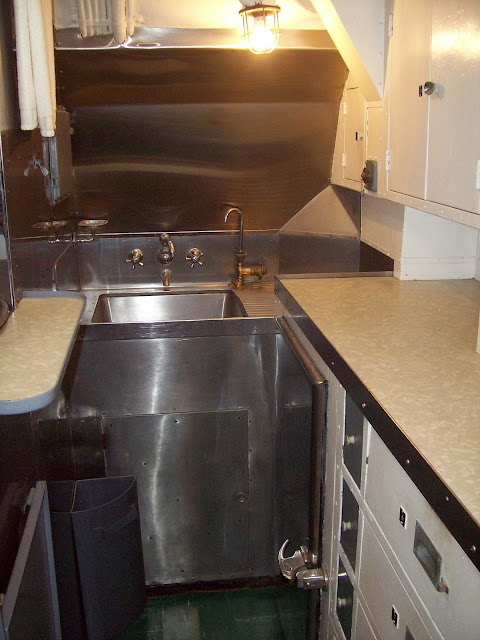 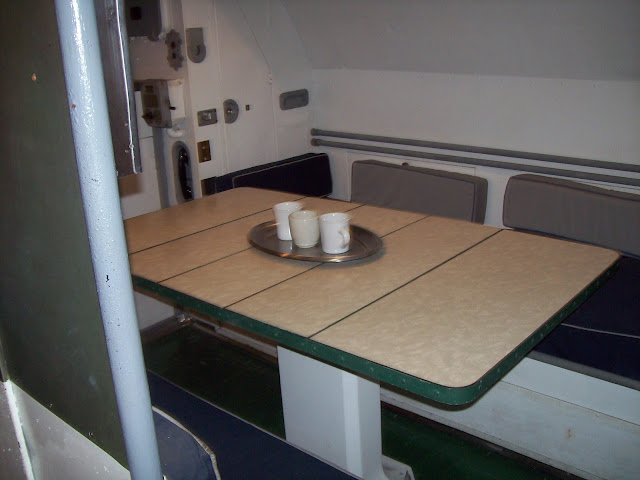 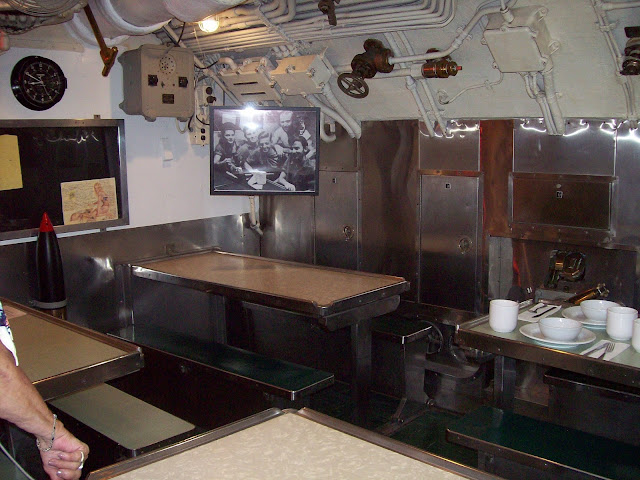 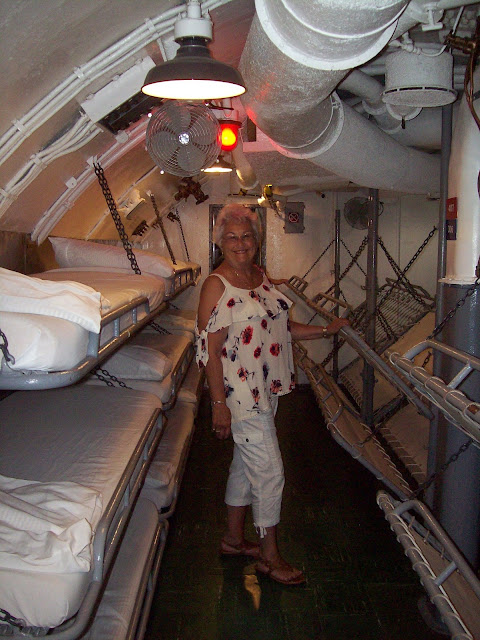 See what I mean about close quarters?

Outside of the Bowfin Museum is a memorial park that commemorates all of the US Naval vessels that were lost during the war, including the names of all of the crew members. It's quite sobering to see the sheer number of lives lost. 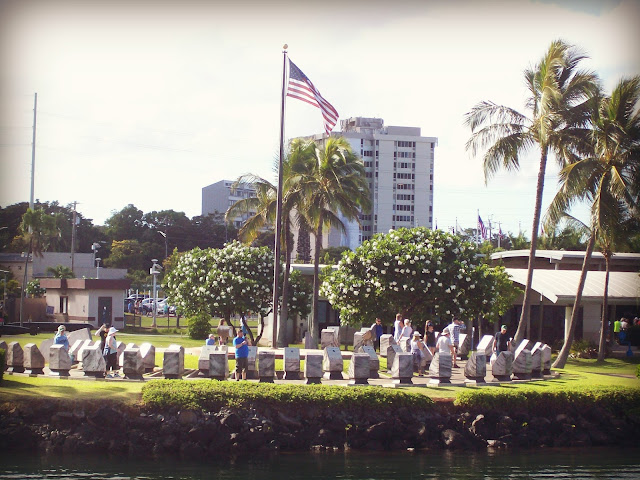 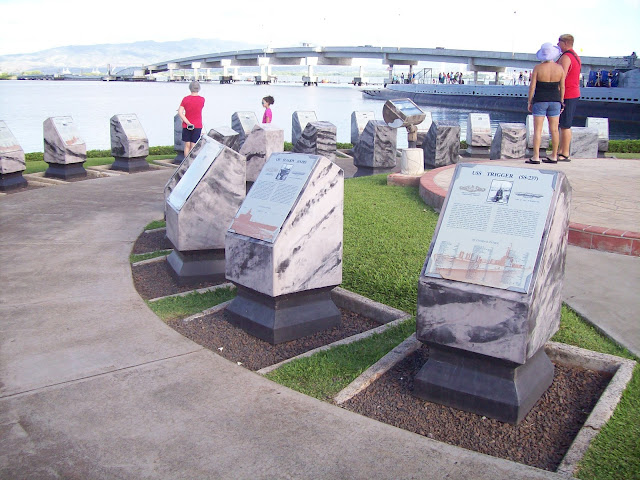 The tour of The Arizona was equally sobering.

Prior to boarding the vessel that would take us on the brief trip to the memorial, we watched a video that clearly explained what led up to the war and how Japan planned and executed the attack on Pearl Harbor.

The video included actual footage, captured by a naval doctor from the USS Solace, a hospital ship anchored on Ford Island, adjacent to Battleship Row. The destruction depicted on the video was unimaginable, particularly the footage of the Arizona bursting into flames.

Watching the video made for a very quiet and reflective ride to the memorial, which, is beautiful and haunting. 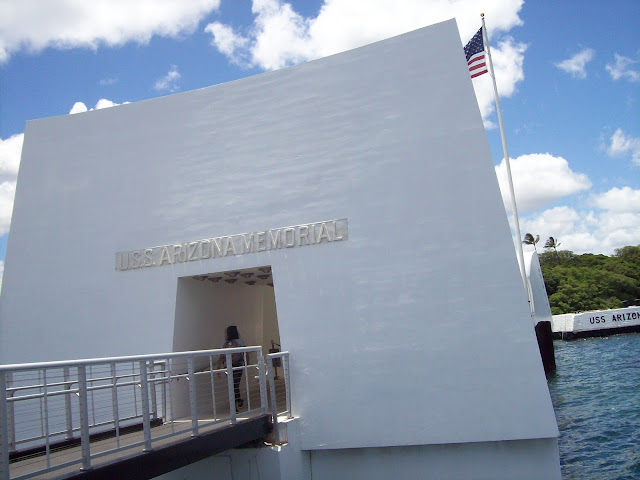 This is the view looking towards the memorial wall... 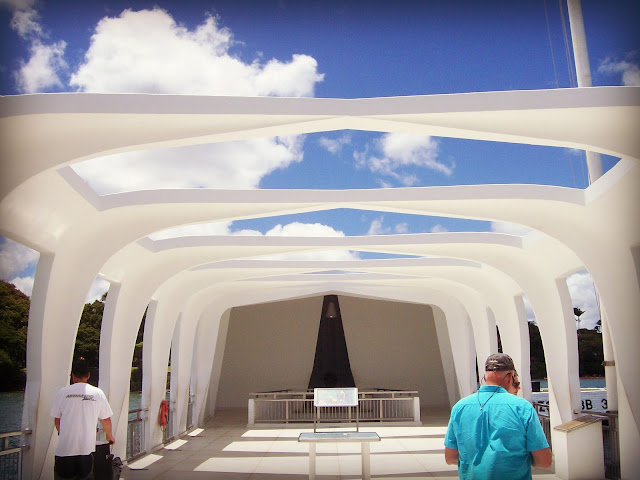 ...commemorating the names of each sailor and marine killed on the Arizona that day. 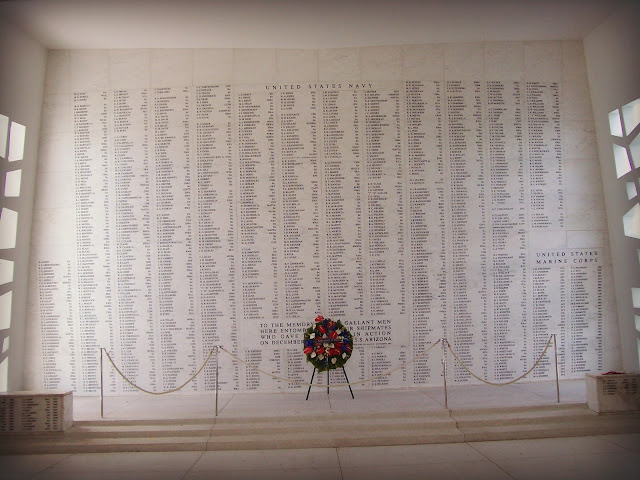 In the picture below, to the right of Hugh's leg, you can see a smaller commemorative stone; this features the names of the surviving crew who have since passed away, and, in many cases,whose remains have been interred on the Arizona, rejoining their shipmates for all of eternity. 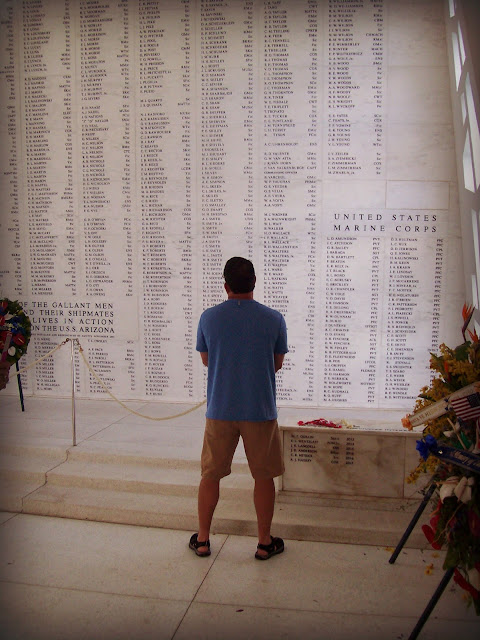 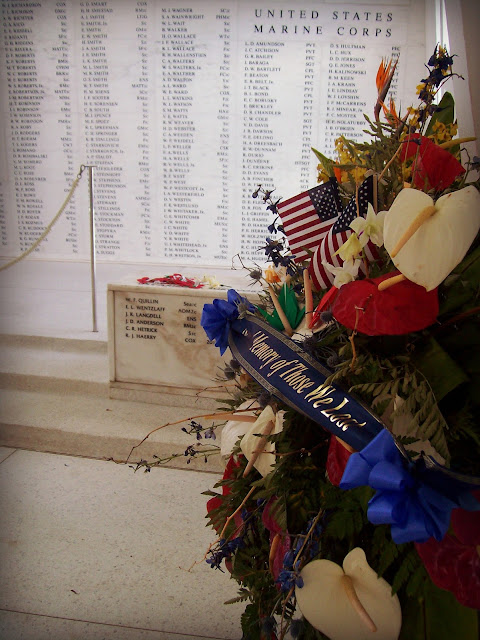 It is a well known fact that the memorial was constructed over the wreckage of the Arizona. Each day, nine quarts of oil seep from the Arizona into the harbor, one drop at a time. Legend has it that each drop of oil represents a tear; the Arizona crew, forever entombed in the wreckage, are weeping for their missing men. It is also said that, when the last survivor of the Arizona dies and the crew is reunited, the tears will stop and oil will leak no more.

As of today, there are four living survivors of the Arizona. 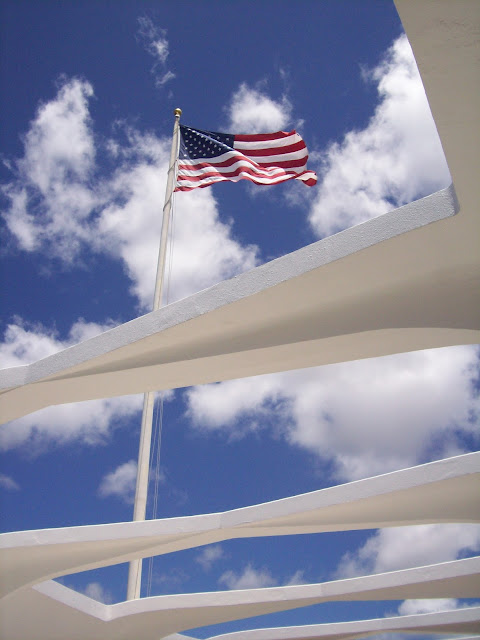 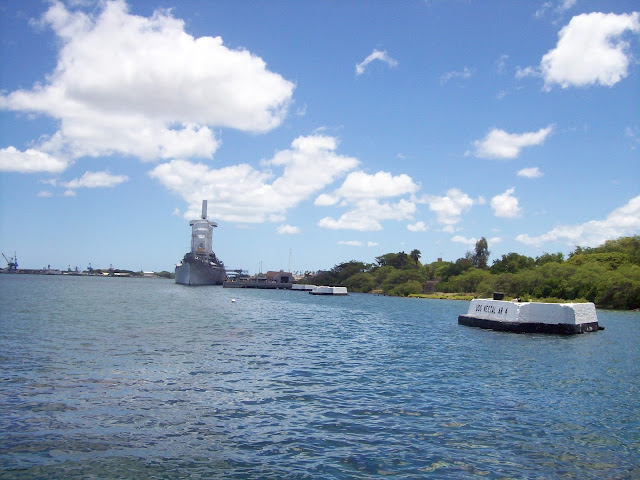 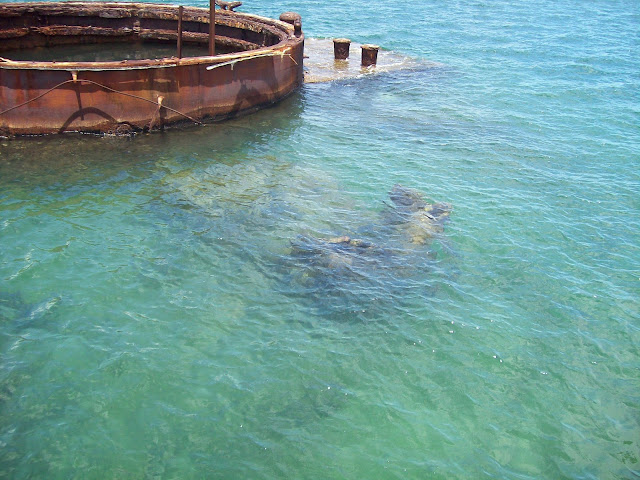 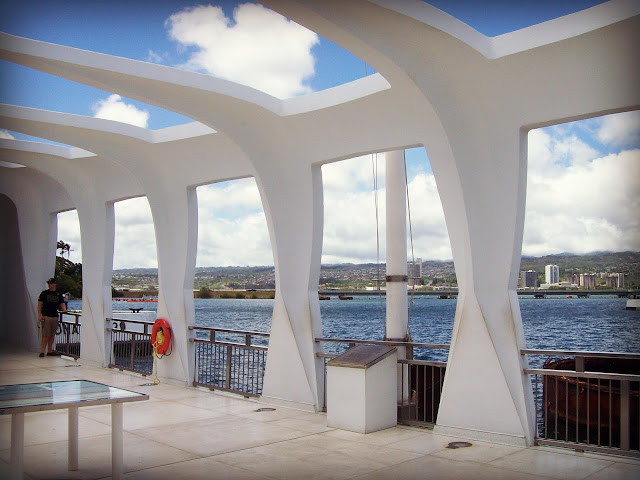 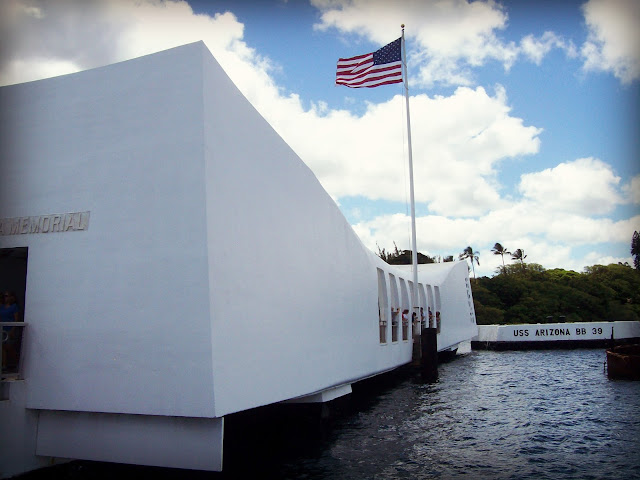 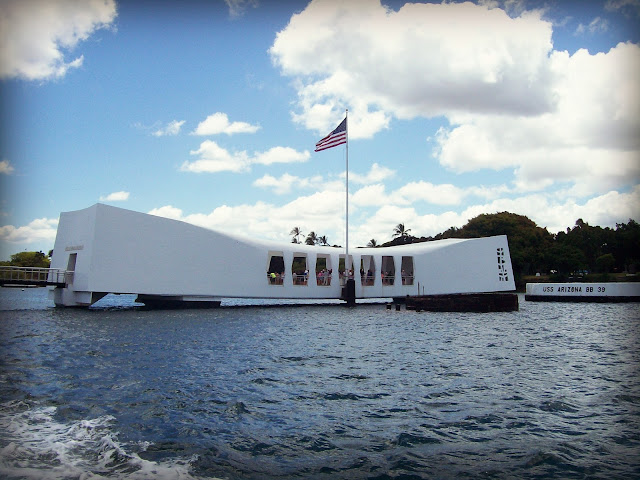 The tour of the memorial lasted exactly fifteen minutes; that is the total length of time that each boatload of tourists is allowed to spend on the site before another boat arrives with another load of tourists. Fifteen minutes seems like a very short period of time in which to tour a memorial, but, in the case of the Arizona, it is more than adequate; the eeriness of the memorial, suspended over what is, in it's very essence, a tomb, stays with you long after you embark on the short ride back to land.

Tomorrow: Day Seven, our last full day on the island.

But, for today, I leave you with one of my favorite photos from the day... 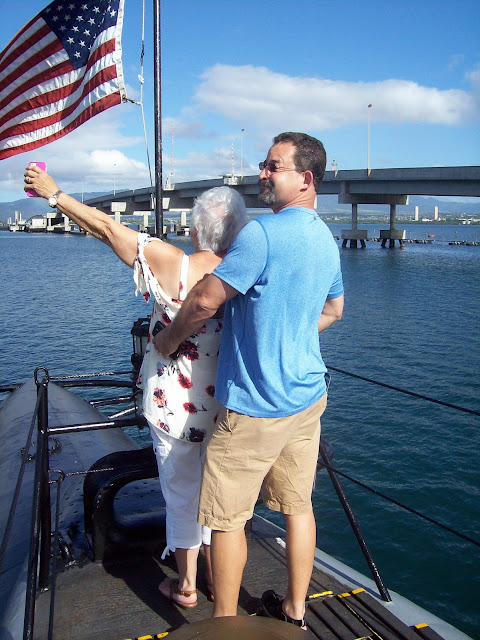