We begin our journey to Hawaii tomorrow; I still have not packed. We aren't actually leaving the house until late afternoon (then, driving to Neighboring City for one last family dinner with Queen B before making the five hour drive to Salt Lake City to camp out in the airport until checking in for our flight at 5:00 a.m.), so, I figure I still have plenty of time for packing.

So, obviously, I still have time to write a post about the Cub, and, since it is Friday, I figured that I would write about the things that make him my favorite son, rather than dwelling on the fact that my favorite son is leaving me (why?!!!!!). So, without further adieu...

1. He can wiggle his ears, independently of any other part of his face. This is a talent we discovered when he was no older than 3 or 4, and, it delights me to this day.

2. His infrequent bouts of temper are mild and brief. He is quick to apologize and he usually thinks before he speaks. He has never said a hurtful thing to me, even in the heat of the moment.

3. His laugh. My God in heaven, thank you for the gift of this child's laughter; it is whole-hearted and exuberant in the extreme. I challenge you to not join him in laughter when he gets going, but, I must warn you; I will win.

4. His lifelong habit of crawling into my lap to have his back tickled. He outgrew my lap quite some time ago, but, that doesn't stop him from draping himself across it and begging for a tickle, anyway. I should also mention that I am not his only victim; his grandmother and various girlfriends have also been targeted (they have always given in, too. Clearly I'm not the only sucker for his puppy-dog eyes and pout).

5. His determination to live life to the fullest and his ability to throw caution to the wind. This is also one of my greatest concerns for him, but, I have faith that he is in the care of a far greater force; I place my trust in Him and pray for His constant protection of my son.

6. He humors me. The most recent example of this being his agreeing to provide "Proof of Life" twice a day, everyday, while he is at school. I don't care if it is in the form of text message, phone call, email, Snapchat, Facebook post, a tweet on the Twitter, or a picture on Instagram; I require evidence twice, daily. He's cool with that and I love him for it.

7. He is super patient with me when explaining technology and/or how to fix something, do something, whatever. He doesn't get impatient and he doesn't treat me like I am stupid. This is especially impressive when one considers that he has had to walk me through playing a DVD on our entertainment system at least five hundred time. Also, I still don't get it, but don't tell him that.

8. He believed in Santa until he was at least eleven years old, then, he pretended to believe for a couple more years simply because he didn't want to steal my Christmas joy. It takes a lot of guts to pretend to believe in Santa when you're a thirteen year old boy.

9. Right now, he is sitting next to me, watching the original Willy Wonka and the Chocolate Factory. And, he's enjoying himself.

10. He loves his sister. Wait, let me rephrase that: He LOVES his sister. One of the hardest things about this whole thing will be watching those two say goodbye to each other. I am not looking forward to it.

I could go on and on, suffice it to say; the Cub is the beat of my heart and the joy in my soul. I'm so very excited for his future and I know he is going to have the best adventures, and, I'll miss him. That's all. I'll just miss him. But, in the immortal words of A.A. Milne: 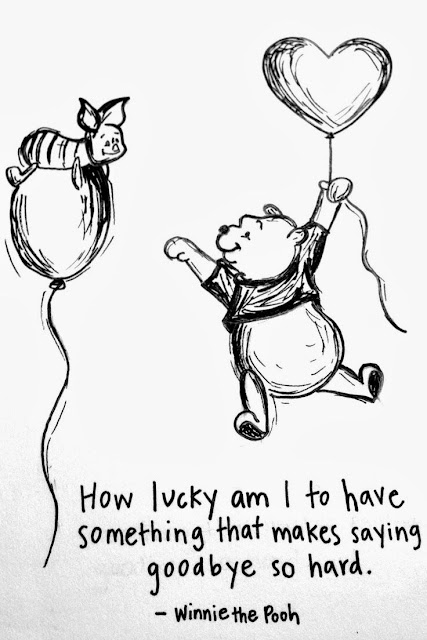