This Little Piggie Went to a Luau

Last night's luau was a major success. I mean major. And, I'll write more about it soon. In the meantime, I want to share that damn cake that caused me so much grief and anxiety. It turned out better than I expected, given the headache that it caused.

First, a little backstory: When I decided that I was going to throw the luau for the boys, I knew that we would be ordering a pig for roasting. The rest of the menu was pretty typical luau fare, and, I decided that, in addition to pineapple upside down cake and frog-eye salad, I wanted a cake. So, I entered luau cake ideas into the Pinterest search engine and, pig cakes featured prominently in the results. Thus began the quest to produce a tasty, luau-worthy pig cake for our guests.

I already mentioned the struggle just to bake the cakes. Once that was somewhat salvaged, Mom, Jana, and I went to work, with Granny providing moral support and comic relief. And, by comic relief, I mean she spent the majority of the evening doubled over, clutching her stomach, laughing at our efforts and dabbing tears from her eyes. Everyone's version of support is different, y'all.

The original plan had been for the hind quarters of the pig to be vanilla, while the head and snout would be chocolate. Unfortunately, the chocolate cake refused to play nice, and, I had to scour the pantry for a back-up plan, which, ended up being red velvet, leaving the snout chocolate. When I baked the head, there was enough batter left over for cupcakes, which, Queen B will never turn down, so I baked six of those as well; this came in handy when it occurred to us that a pig needs feet. So, we ended up with a vanilla body, red velvet head and feet, and a chocolate snout. It was the Frankenstein of pigs, but, ultimately, it worked. 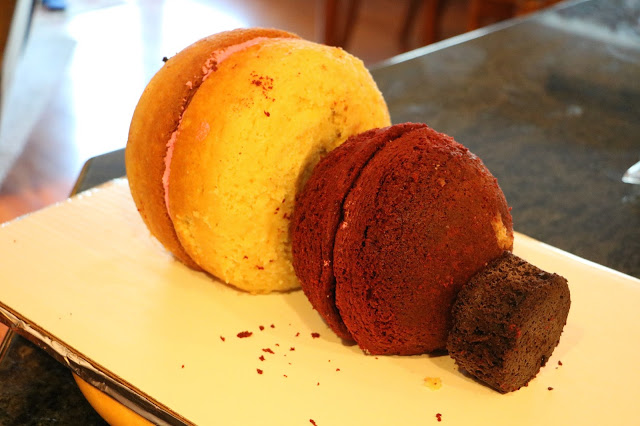 Once the parts were assembled, we crumb-coated it with buttercream frosting to hold everything together. 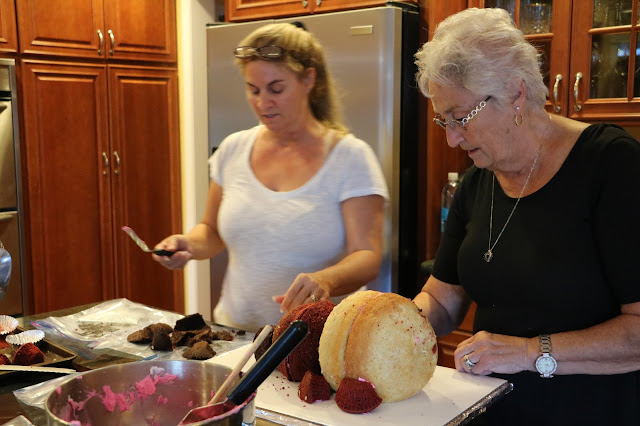 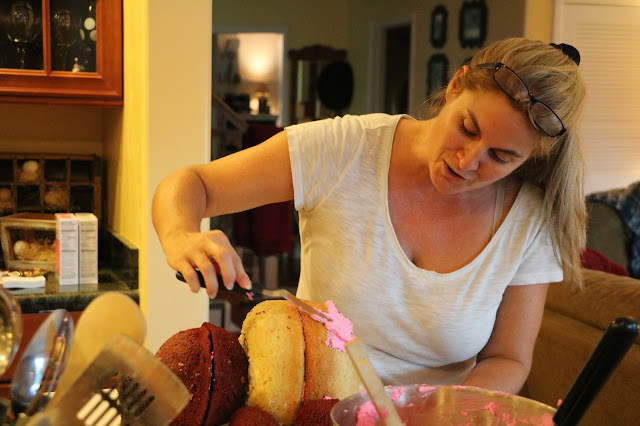 Then, we coated it pretty heavily with the buttercream, because I am not a fan of the taste of fondant and I wanted a good icing layer that people would enjoy once they peeled back the fondant. 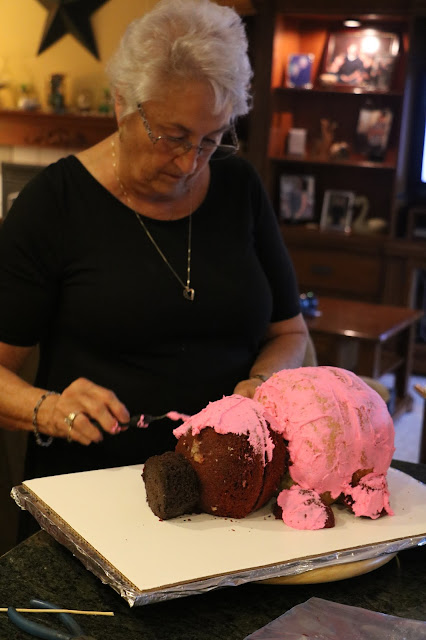 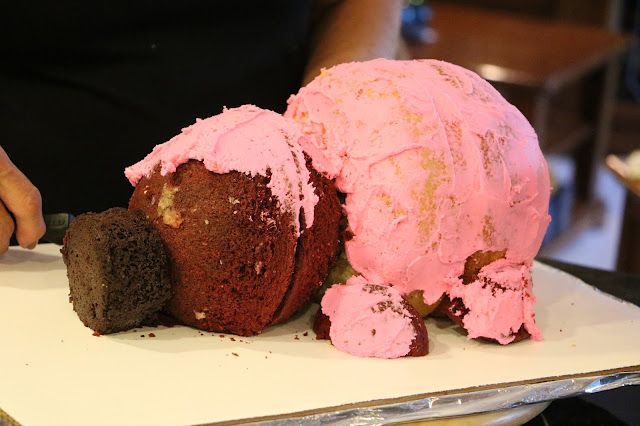 Once the pig was iced, we busted out the fondant, and, had it not been for Jana, I am relatively confident that we would have eventually thrown our hands in the air and consigned the pig to the compost bin. Jana was a cheerleader for the fondant, y'all.

I don't have any pictures of the fondant rolling, draping, smoothing, etc., because I was busy cussing it every time it tore, buckled, wrinkled, etc., etc. Just trust me, fondant is best left in the hands of the professionals. Or, Satan, since I'm pretty sure it's one of the most effective weapons in his arsenal.

But! Once all the tears were dried (mine of frustration and Granny's of mirth), we ended up with a Pinterest-worthy cake that I was not embarrassed to serve our friends. 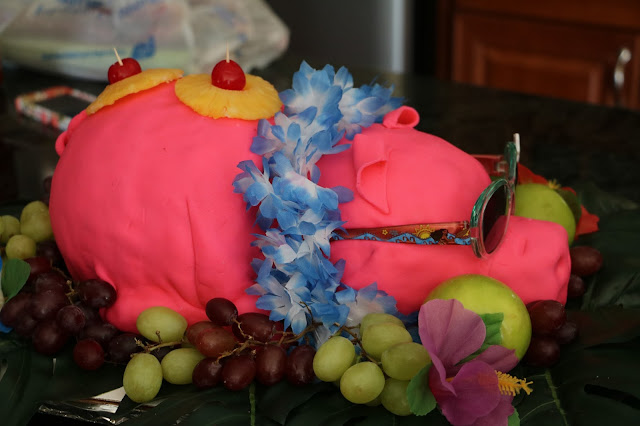 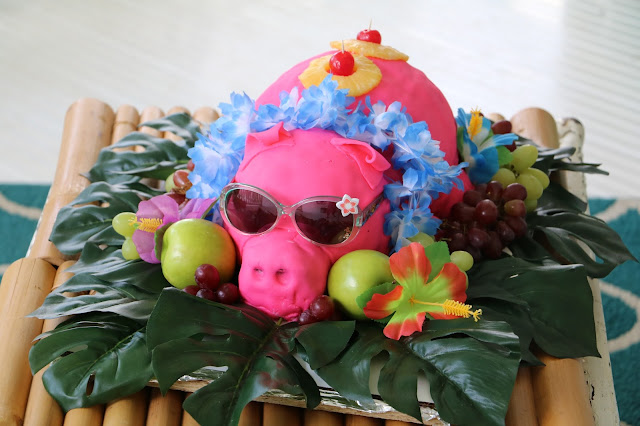 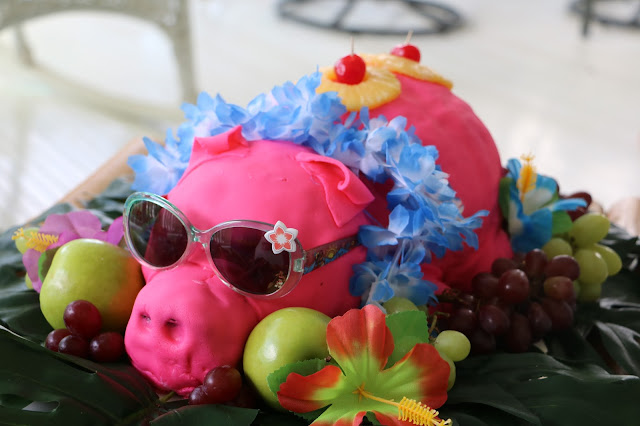 The best part? Once you peeled back the devil-layer, it tasted like the bomb-diggity.

My favorite part, though? 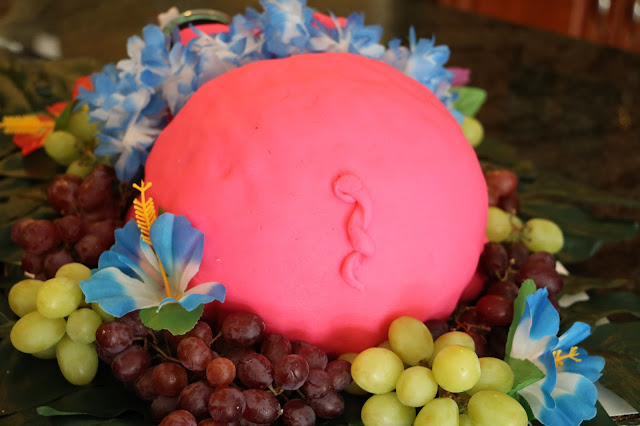 Thus endeth the saga of the luau pig cake.