I don't think I ever wrote about the outcome of the scholarship contest that the Man-Cub was a part of; I guess I got busy. Better remedy that, now, I suppose.

So, when we left the Cub, he was in the lead in his pool, and, I'm happy to report: he won. That moved him into the Championship round, where he was pitted against five other athletes for the $1000 scholarship. The Cub's poster for that go-round was also very nice... 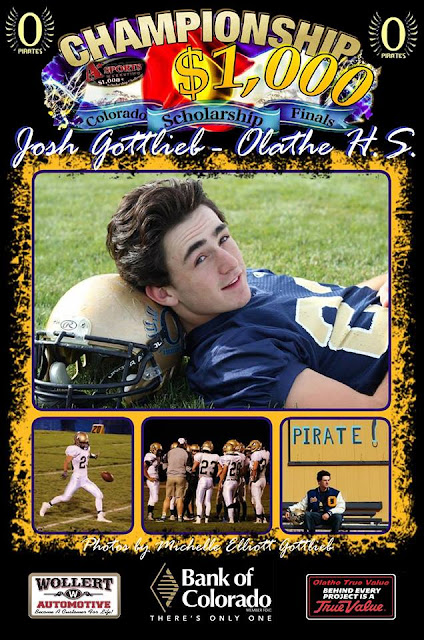 ...but, alas, not nice enough to secure him the win. Instead, he finished in fourth place, which, isn't as bad as it seems, considering that he was one of forty athletes to compete, eventually making it into the top twenty, then the top six. That's an accomplishment I can get behind, any day.

I also think I failed to provide an update on the Cub's recent football injury, so, I'll remedy that as well: the Cub visited a sports medicine clinic earlier this week; x-rays showed no fractures and he was cleared to play in this week's game on the condition that he limit his participation to punting. The Cub, the coach, and the doctor are all cool with this, so I concur. He will also do some physical therapy on down the road, to strengthen the ligaments and to hopefully prevent future dislocations. In the meantime, he should be back on the field in every capacity by next week's game. 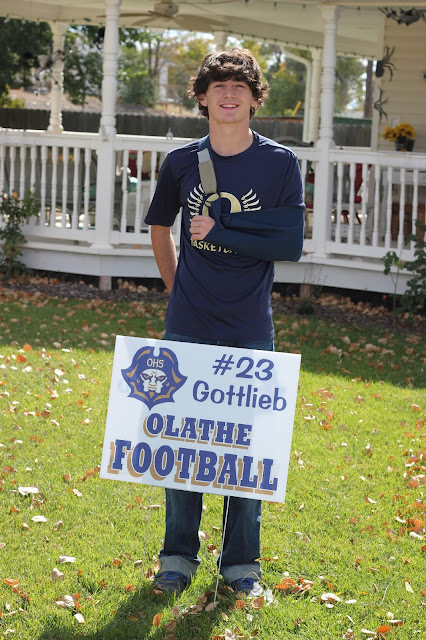 He is still wearing the sling at school, mostly to garner sympathy from the girls (I think).

In yet more news, I am now the proud owner of a professional logo for my photography business.

I love it. It makes a classy watermark and it will look amazing on envelopes, portrait boxes, letterhead, and usb drives (assuming I win the lottery and can afford to special order customized items).

I think that is about it for updates. I won't bore you with the fact that I pulled the last of the root vegetables from the garden last night, although, I did, and, the carrots were amazingly sweet. Also, I have seven butternut squashes on vines that are finally starting to die, which means that I will be making butternut squash soup, ravioli, and risotto any day now.