And… Now… For…The Rest of the Story…

Alternate title: Siri Is a Lying Liar Who Lies

So, about that road trip gone horribly wrong…ok, maybe not horribly wrong, but, wrong enough to leave me with a minor case of PTSD…

As you know, it started off well enough; first, we loaded up the car with a good deal of the paraphernalia necessary for hosting a kick-ass bridal shower (I took roughly half of what will be needed for the event on August 10th, and I’m glad I did because there is no way that it would all fit in my car when I return for the actual shower). 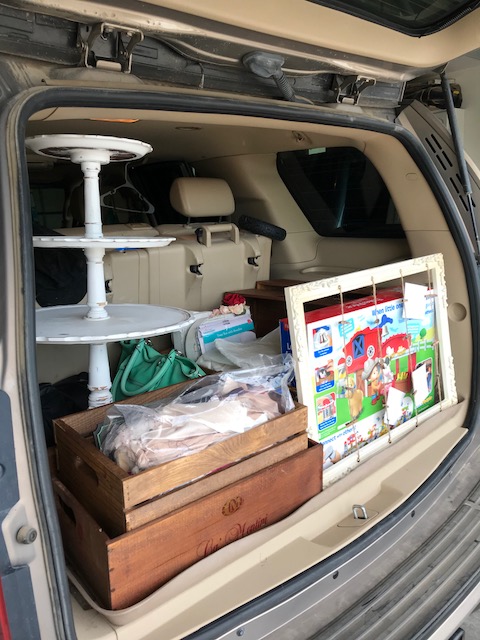 Then, we grabbed road trip snacks and headed out. We thoroughly enjoyed the first two-and-a-half hours of the trip, chatting and reminiscing about past trips to the Valley.

Upon our arrival in the valley, I made the fateful decision to take a side trip to the venue at which the wedding will be held in September; I had never been there before and wanted to familiarize myself with the location prior to photographing the event.

Since I hadn’t been there before, and, had only a vague idea of the direction to take; we plugged the address from the wedding invitation into Queen B’s phone and trusted Siri to lead the way.

This was a mistake, as it turns out.

Siri proceeded to take us on a route that we would later discover had led us right past the wedding venue, like, RIGHT PAST the venue (in our defense, a large wooden archway depicted in the online photos of the venue had been removed at some point; had it been standing, I would NOT be telling this story).

Siri: You will arrive at your destination in two miles….Lie #1

She then led us onto a dirt road that rapidly morphed into a dirt trail that then became what I am certain were the historical artifacts of wagon wheel ruts, leftover from the Great Western Expansion of 1854.

Siri: You will arrive at your destination in three minutes…Lie #2

Three minutes later, the wagon wheel ruts made a sharp left hand turn and began the ascent to what I am assuming was the base of Mount Kilimanjaro in some parallel universe. Since I was not attempting to discover previously unknown universes right in my own backyard I was, understandably, concerned.

Siri: You have arrived at your destination…Lie #3

Aaaand, then we lost the cell phone signal.

Realizing that we had somehow missed the mark, I maneuvered the car around several large boulders and managed to get back on the goat trail road, heading back toward civilization, which, is when my car’s emergency alert system started squawking about low tire pressure in the rear driver’s side tire.

Well, fuck, thought I, this can’t be good.

I stopped the car and got out to check the tire pressure. Aaaand, well, there really was no tire pressure of which to speak, so, that chore was accomplished quite rapidly.

Better call someone, thought I.

And, except for that whole “loss of cell phone service” nonsense, I would have. Instead, I found myself slooowly creeping down the donkey trail trying in vain not to damage the rim of my tire while Queen B leaned out the window, waving her phone around in search of signal.

There may have been some profanity.

After what felt like ages and ages, we finally got service back.

Chelle: Shut the fuck up, Siri.

I was able to make a call out, getting in touch with my mom, who suggested that I call my nephew, who was working on the family farm about ten miles away. Luckily, he was able to hear his phone over the noise of his thresher, and, after a brief (in dog years) wait, he arrived to change my tire. 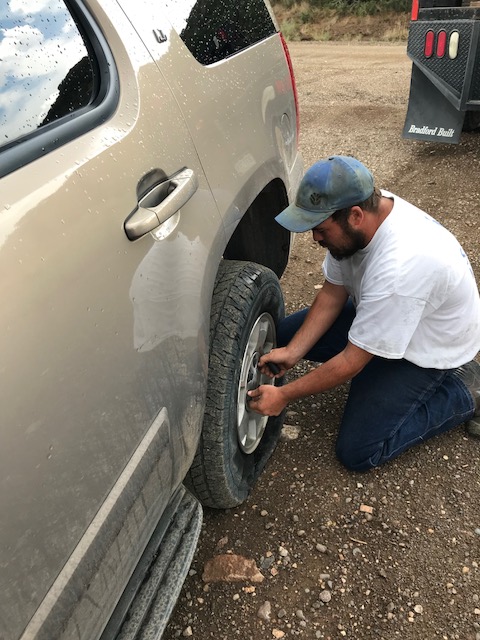 As a side note, I will mention that Queen B insisted that she could change the tire, but, the weather had turned nasty, and I was concerned about the stability of the dirt bank we were parked in due to the rain. Also, I am paranoid, and, in the event that the car fell on her, I was not entirely confident that I could exhibit the superhuman strength required to free her.

Our troubles were not over, however, because, my nephew was unable to access my spare tire, despite Queen B queuing up several helpful YouTube videos that depicted the very steps necessary to lower it from the undercarriage of the car; that’s when I really started to believe that I was experiencing the live version of that stupid Bill Murray movie*, and, the day truly was never going to end. Also, I was unnecessarily convinced that I had severely damaged the car while off-roading where only mountain goats would dare to tread, in which case, Hugh was most certainly going to kill me.

Since we were unable to use my spare, my nephew instructed me to take his farm truck, drop him off at his swather (thresher? I am unfamiliar with John Deere) so he could get a few more circles of hay cut while I took the tire to a station down the road for repair.

Unfortunately, my nephew’s farm truck cannot get above 50 mph, so, the sensation of a day that was lasting forever continued on throughout the twenty mile drive to the station, where, as my crappy luck would have it, they were unable to fix my tire (you owe me a new tire, Siri!).

They did, however, have a brand new tire that they were willing to sell to me for just under the price of a second home on a tropical island (Yes, ma’am, but, it’s got a warranty!)

After I coughed up the cash, we sped back on down the road (at no greater than 50 mph), picked up my nephew’s field hand (sixteen years old, sweet, but, not a lot going on upstairs), and he accompanied us back up the tracks of my tears to my car, where he (finally!) managed to mount the new tire.

An hour or so later, we were at my Mom’s house, where we were greeted with warm hugs and offers of wine, because, Jeebus Crackers, did we deserve wine.

And, that’s the entire story, the moral of which is:

That bitch has a wicked sense of humor.