I'm still not ready to write about the experience of leaving my daughter at college, but I'm getting there. Right now, her absence in the house is a lot like a lost tooth; you wiggle that thing for what seems like ages until it is finally ready to fall out. When it does, there is a sense of relief and accomplishment, but, that doesn't stop your tongue from absently probing the space where the tooth used to be. You know that a new tooth will quickly grow in to fill the space, but, until that happens, you have to live with the tenderness and the empty hole.

That's how I feel about my firstborn leaving home. I'm proud of the growth, I embrace the transformation, but I'm still probing the tender spot.

For now, I don't mind writing about the experience of actually moving The Teenager into her new dorm room, because that was actually a lot of fun. It was also a lot of work, but, the excitement on her face more than made up for the sweat equity.

The dorm that the girls are in is quite large, it features a common living area, a large three-sectioned bathroom (main area with sinks, separate toilet area, separate shower area), a double room (which The Teenager and Miss Hooterville share), and two smaller single rooms. It is a really nice set-up and far better than anything I saw back in my college days.

On moving day, we arrived to find Roomate #1 already moved in, having arrived at the earliest possible check-in time and with very few possessions, when compared to the other three girls. Roomate #2 was in the process of moving in and we got to meet her mother, which was nice (and, which was the first indication that I do not, as of this moment, have a Mom Haircut, but, more on that later).

Miss Hooterville had not yet arrived but had texted that they were not far behind us, so we set about getting The Teenager's belongings from Hugh's truck and The Teenager's car (Reggie, as you may recall). There was, a lot of stuff. Luckily, there were numerous football players milling about the hall for the sole purpose of helping the freshmen move into their rooms, and you can bet your ass that we took full advantage of them and of the shopping carts that the school had on loan from the Home Depot. Because of that, we made a total of one trip with the entire contents of two vehicles. Football players are highly recommended when it comes to moving, in case you ever need to know. 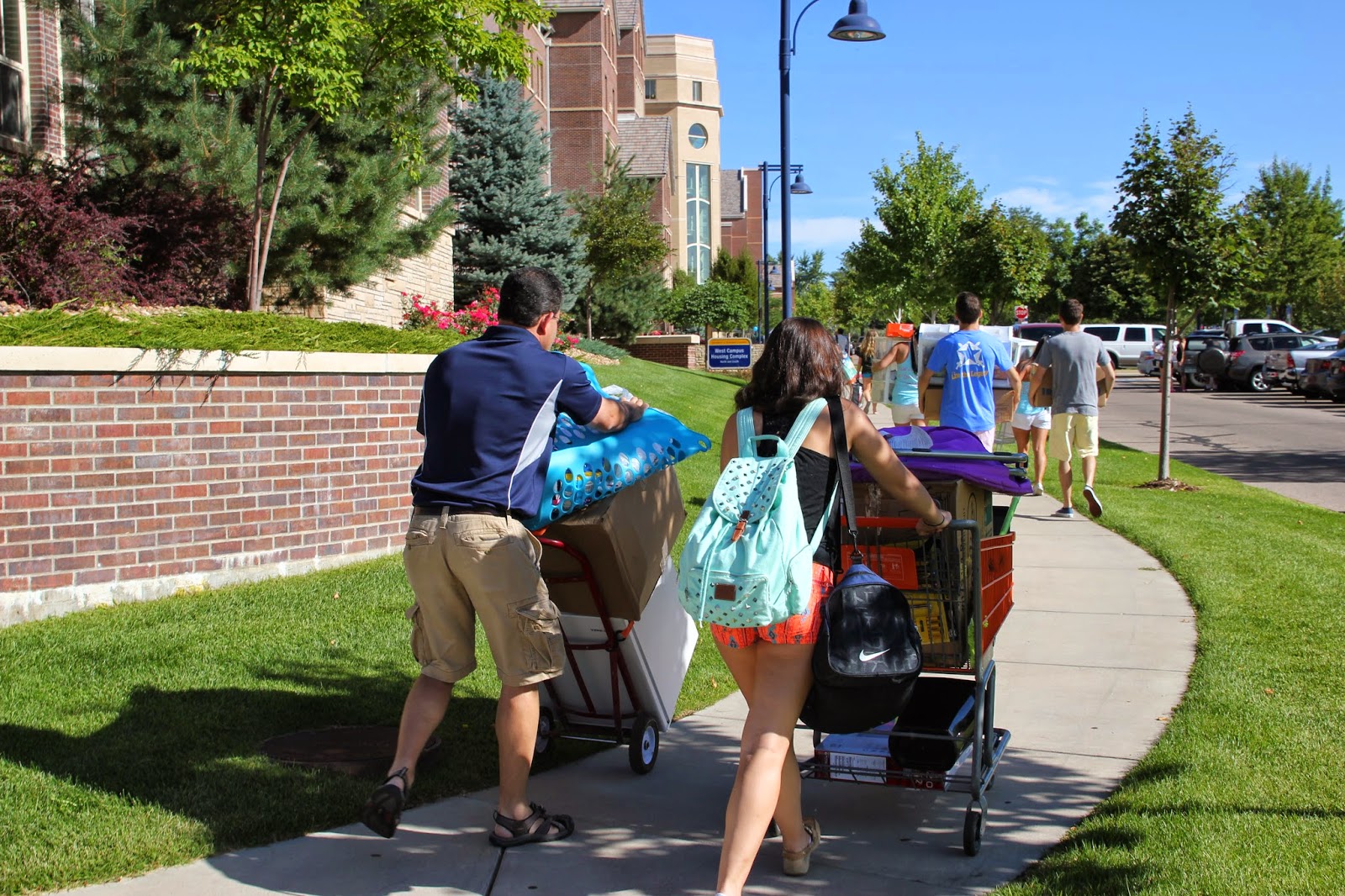 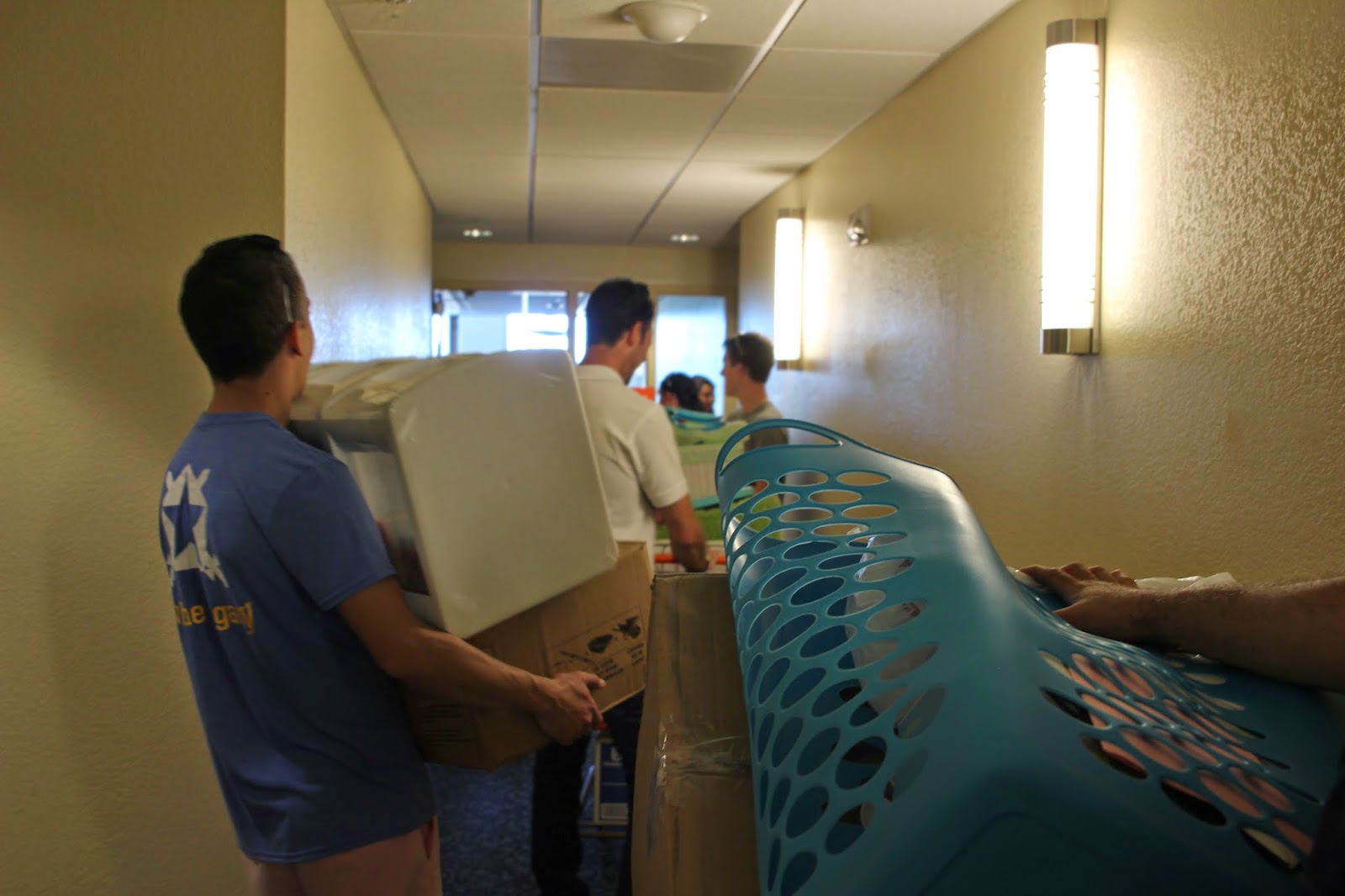 Once we had everything in the room, putting it all together went pretty quickly. Miss Hooterville arrived shortly after the football players left and between her mom, her mom's boyfriend, her dad, her dad's wife, Hugh and me, there were more than enough hands, too many, in fact (Miss Hootervilles's dad and his wife tapped out fairly early. Her mother is still there as I type this, but that is a story for another day).

So, in no time at all, the room went from completely empty, sterile, and institutional-like to homey, warm, and inviting. Also, colorful, fun, and functional. 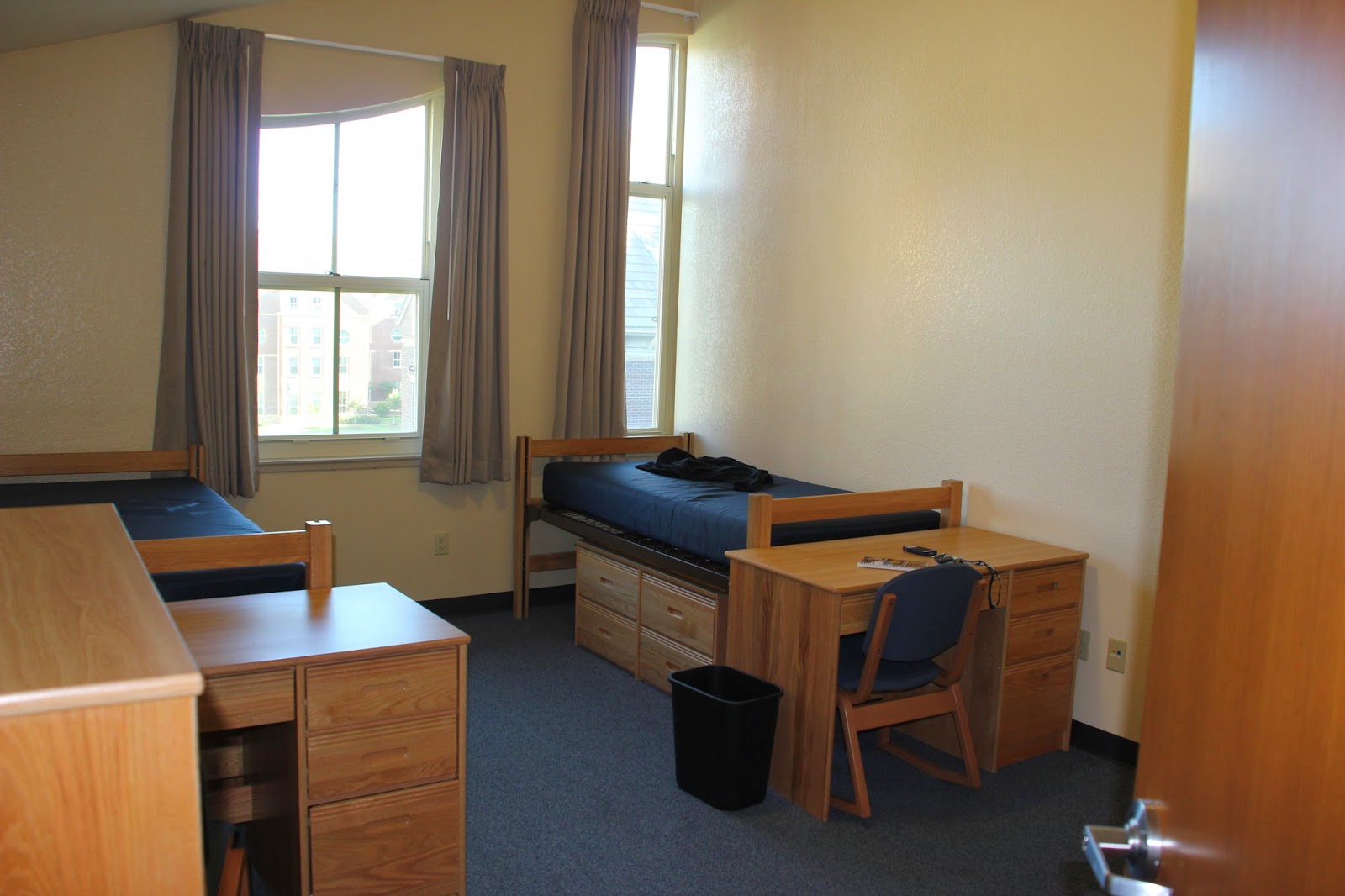 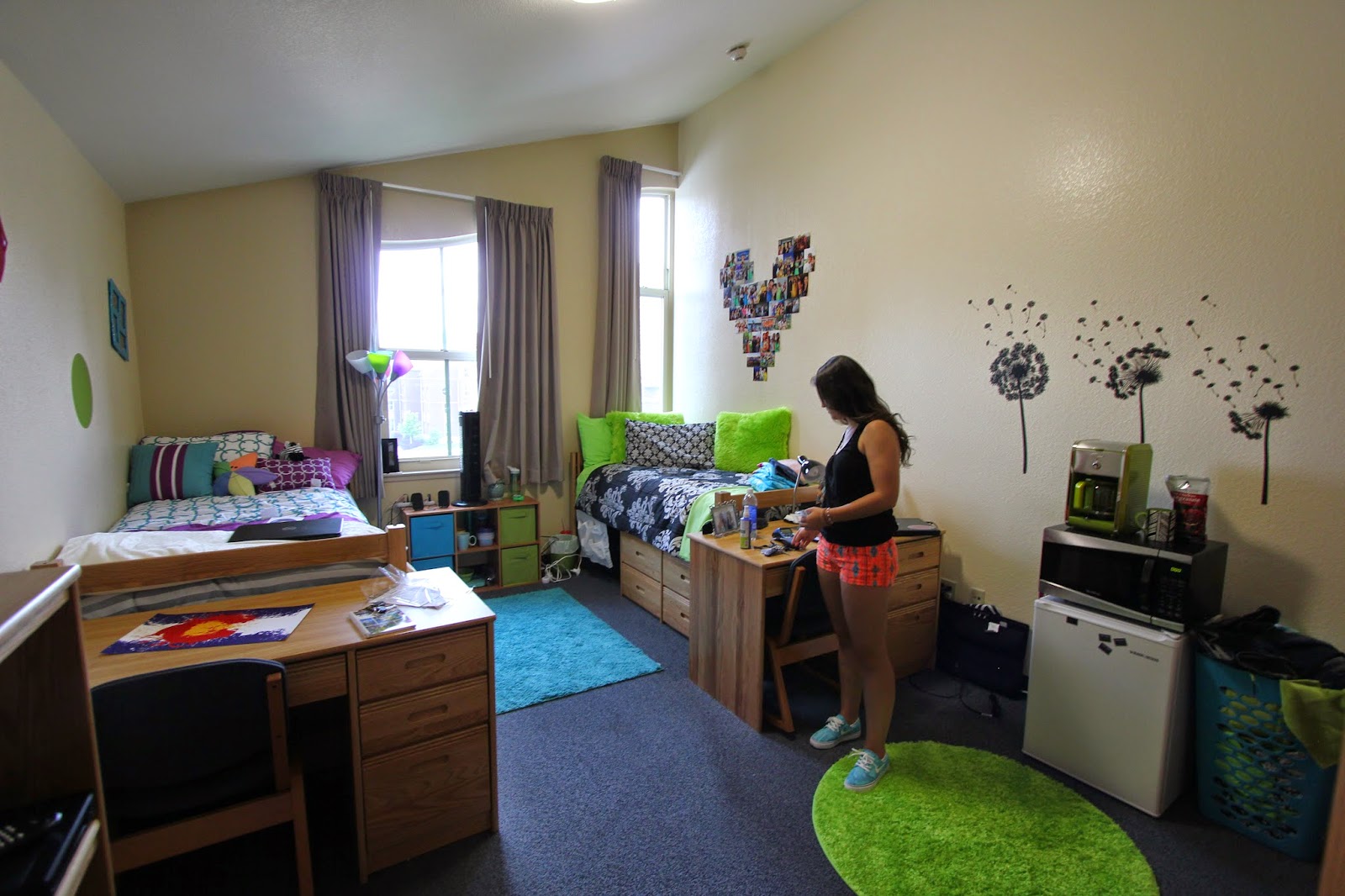 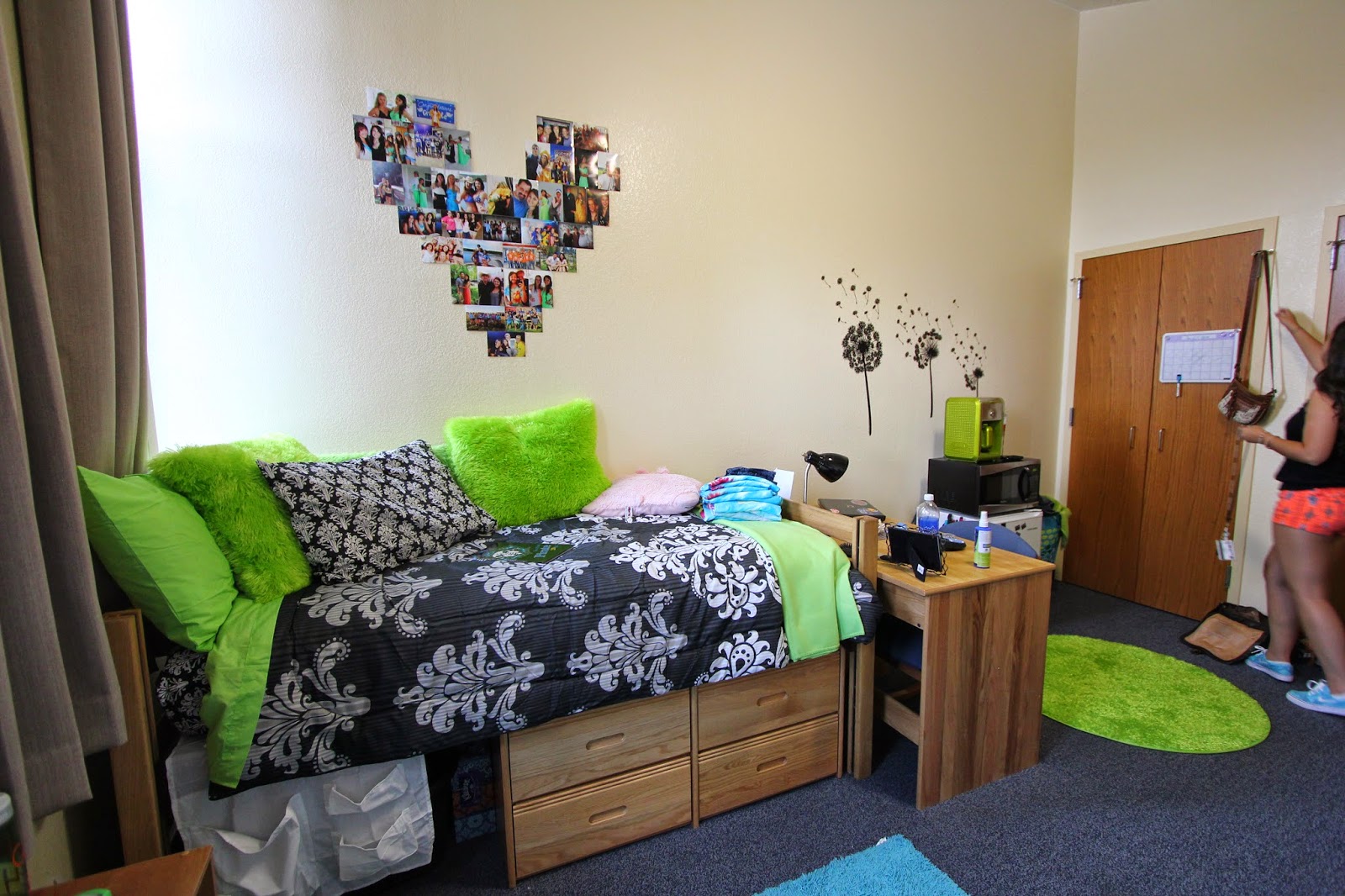 After we got the room set up, we accomplished the other chores that needed to be accomplished in order for The Teenager to start the semester without stressing over having to handle them on her own, things like picking up her books at the bookstore, picking up her parking permit and adhering it to Reggie's windshield, paying her tuition (on the Disney card, which we will pay off immediately, thus earning enough points to possibly take the children back to the Magic Kingdom while we are all still young enough to enjoy it), purchasing last minute supplies and making sure that her computer was working, that her printer was connected and that her television had channels.

While we were running several of those errands, I had the chance to see a large part of the campus, and it is really a nice place. I know The Teenager is going to love it.

It was also while we were running errands that I noticed that most of the other mothers sport a very similar haircut-an asymmetrical wedge-cut that is longer in the front and on the sides and shorter in the back. I must have seen that haircut on at least a hundred mothers, twenty of whom we stood in line with at the bookstore, which, was where I first started to notice the phenomenon. It struck me that the moms all looked suspiciously similar to Roomate #2's mother, and,  for just a second, I had second thoughts about keeping my hair long, but, then I thought about having to get up every day to wrangle hair gel or mousse or a flatiron or whatever the hell it is that those women have to use in order to get that look and I realized that I am not a short-hair kind of gal. Plus, life without a ponytail would not be worth living.

And, that tangent was really off topic, where was I? Right, touring the campus... 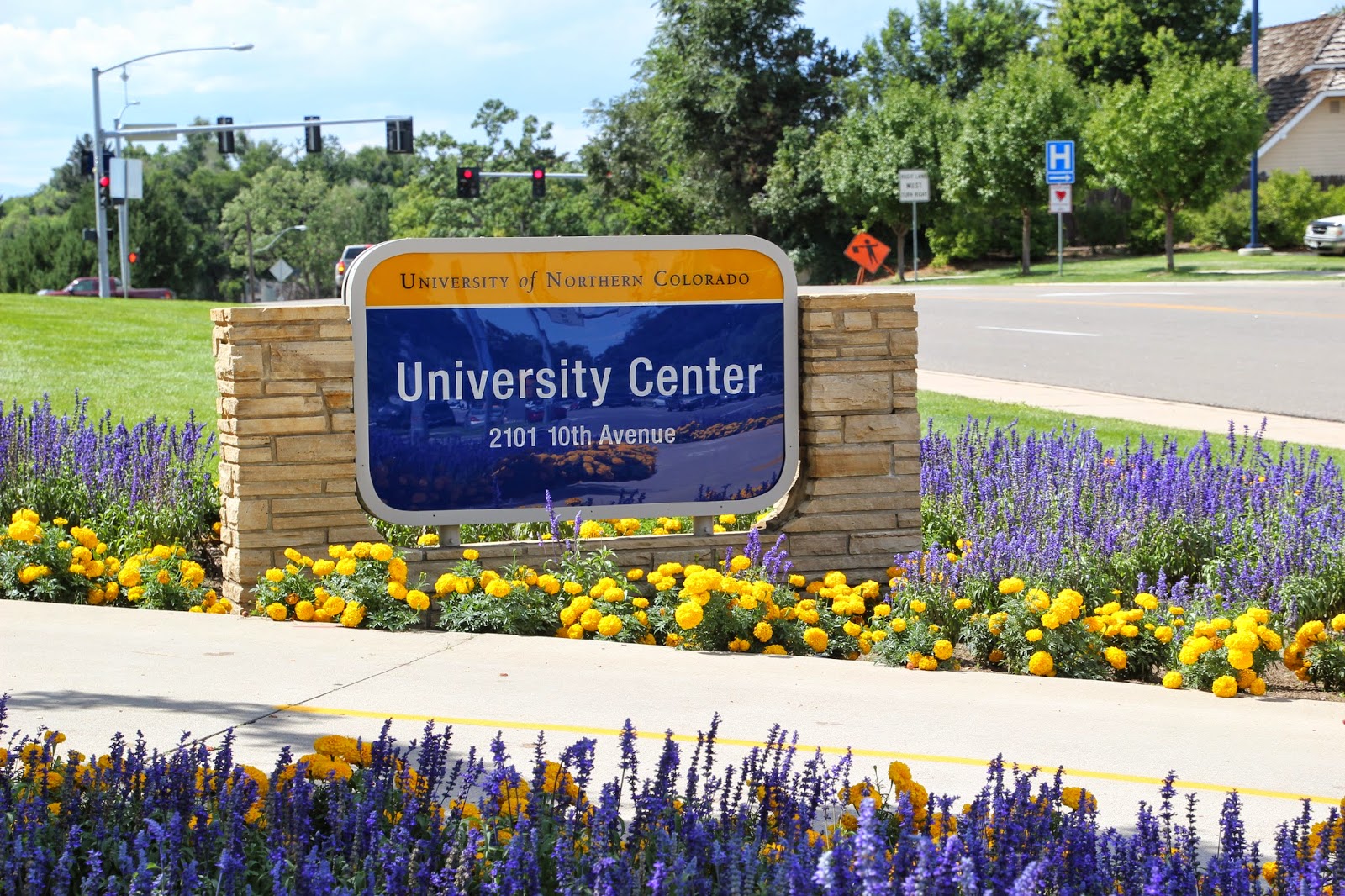 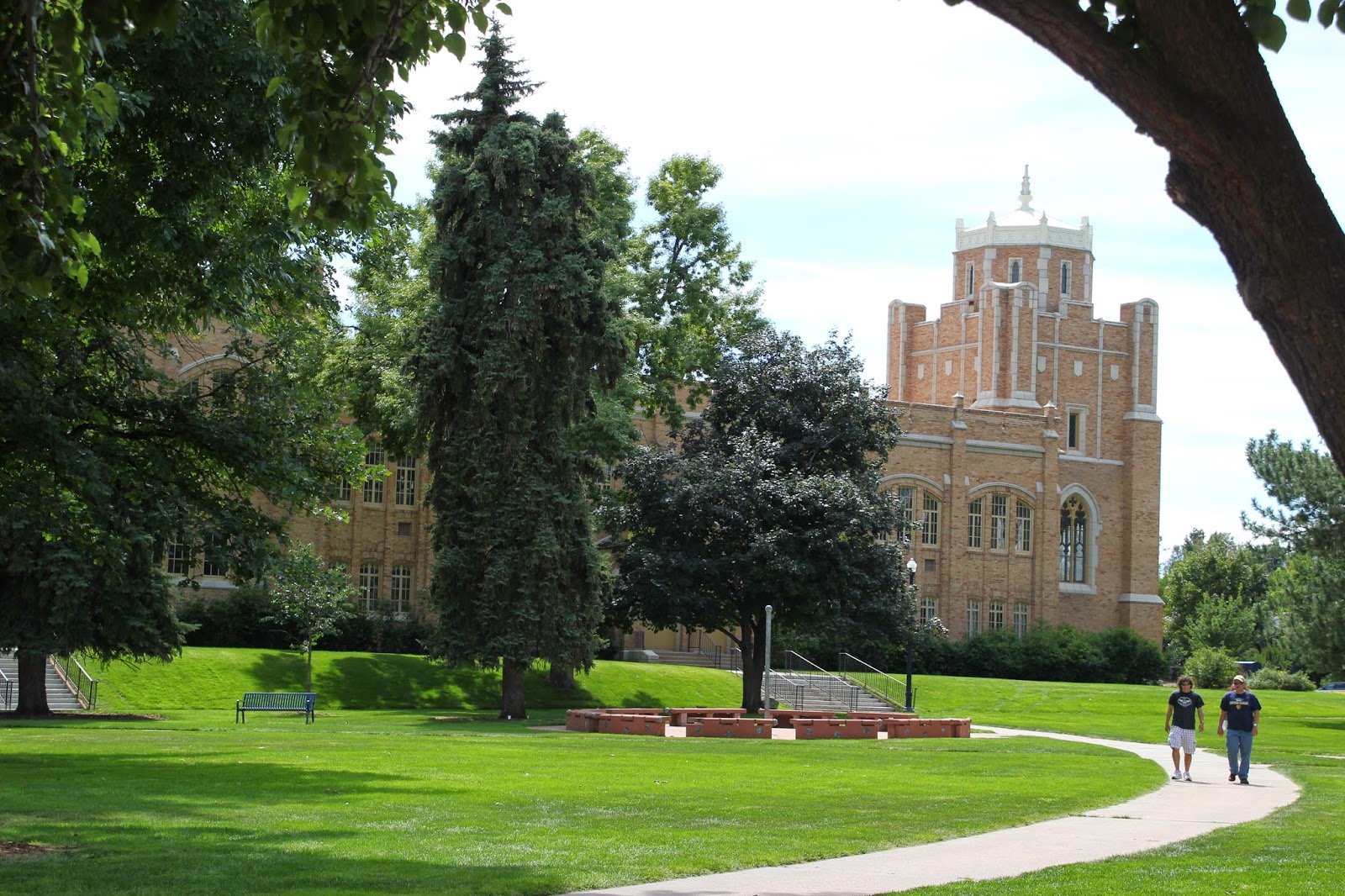 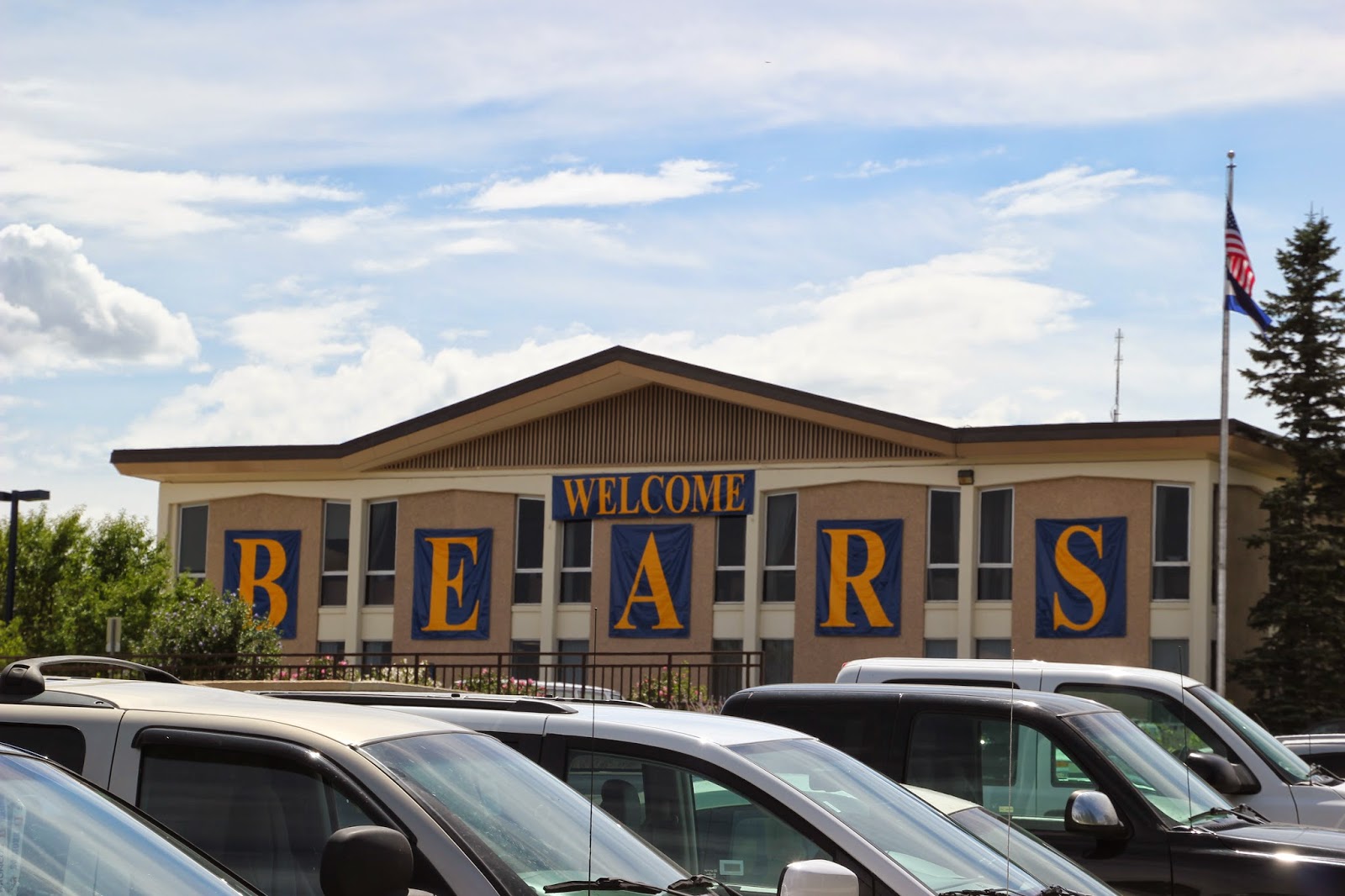 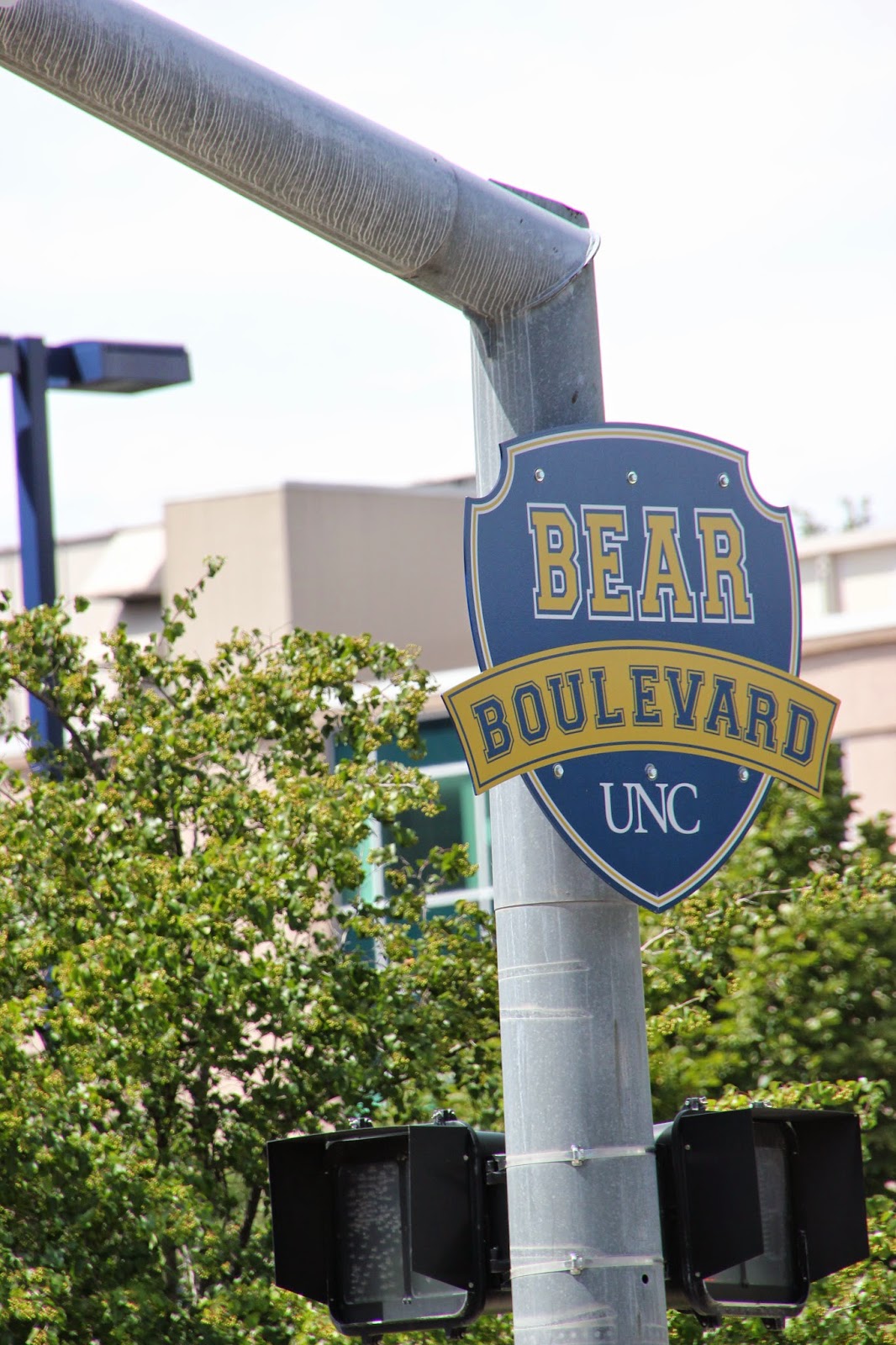 ...of course, no trip to Hugh's alma mater would be complete without a stop at his old frat house. Oh, it would have been complete for myself and for The Teenager, but, we like to humor the man on occasion. 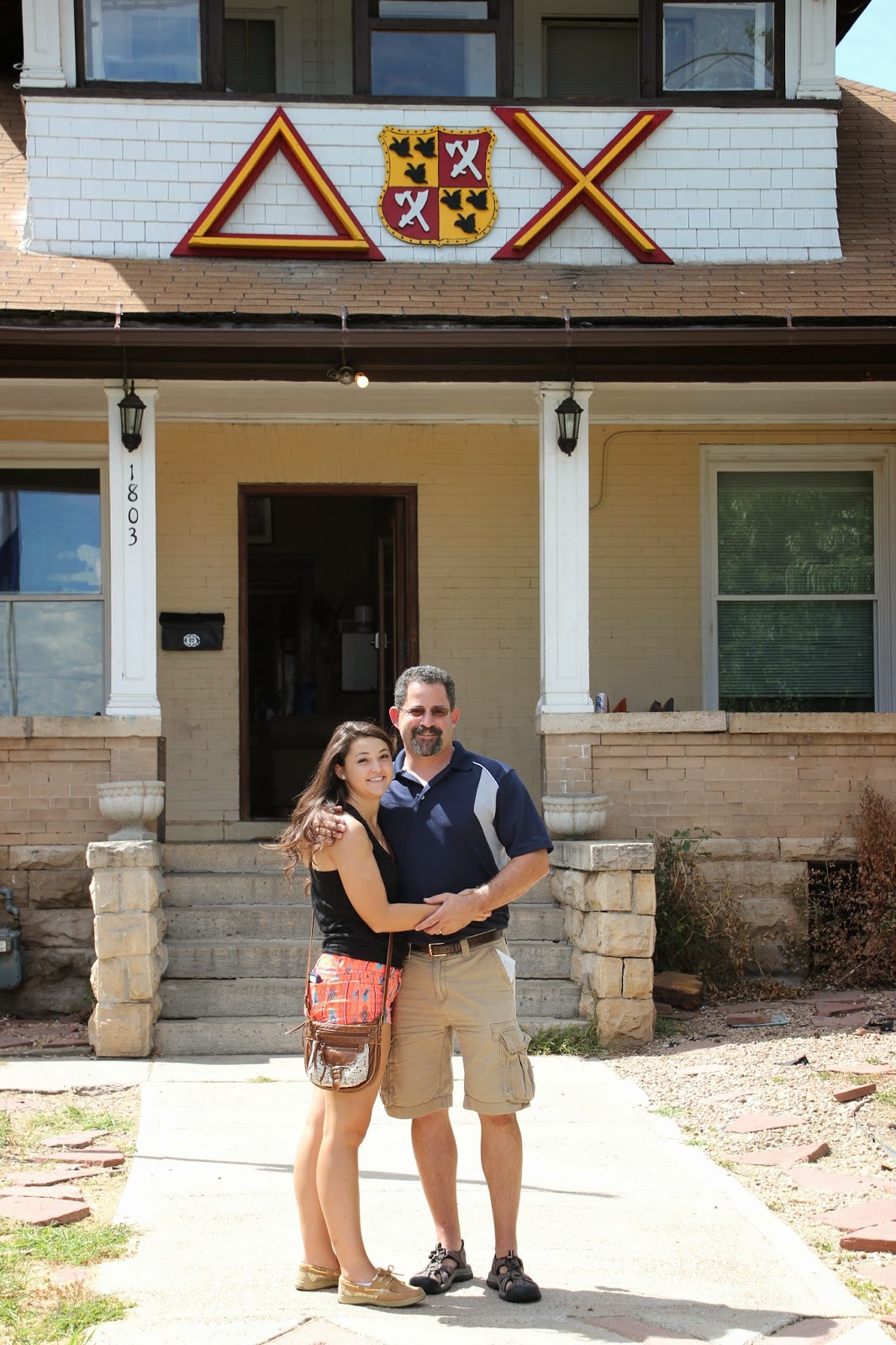 In the end, it took us less than a full day to get The Teenager settled. We stretched it out, naturally, but that had more to do with the reluctance to leave her behind than anything else. Of course, eventually we had no choice. On the bright side, she was smiling when we left, so, there is that, at least. And, as I've said, I will eventually get around to writing about the emotions behind the move, but, for now, that space is just too tender, the nerve just a bit too exposed.

I'll give it a bit more time.

In the meanwhile, I have Facetime and Skype and text messaging and good old-fashioned phone calls to keep me connected to my baby and I intend to take full advantage of all of them. I also vow to do so in as reserved a manner as possible so that the child has a chance to spread her wings a bit, because I have faith that we have raised her to do so without going all wild-child.

We did good, I think. 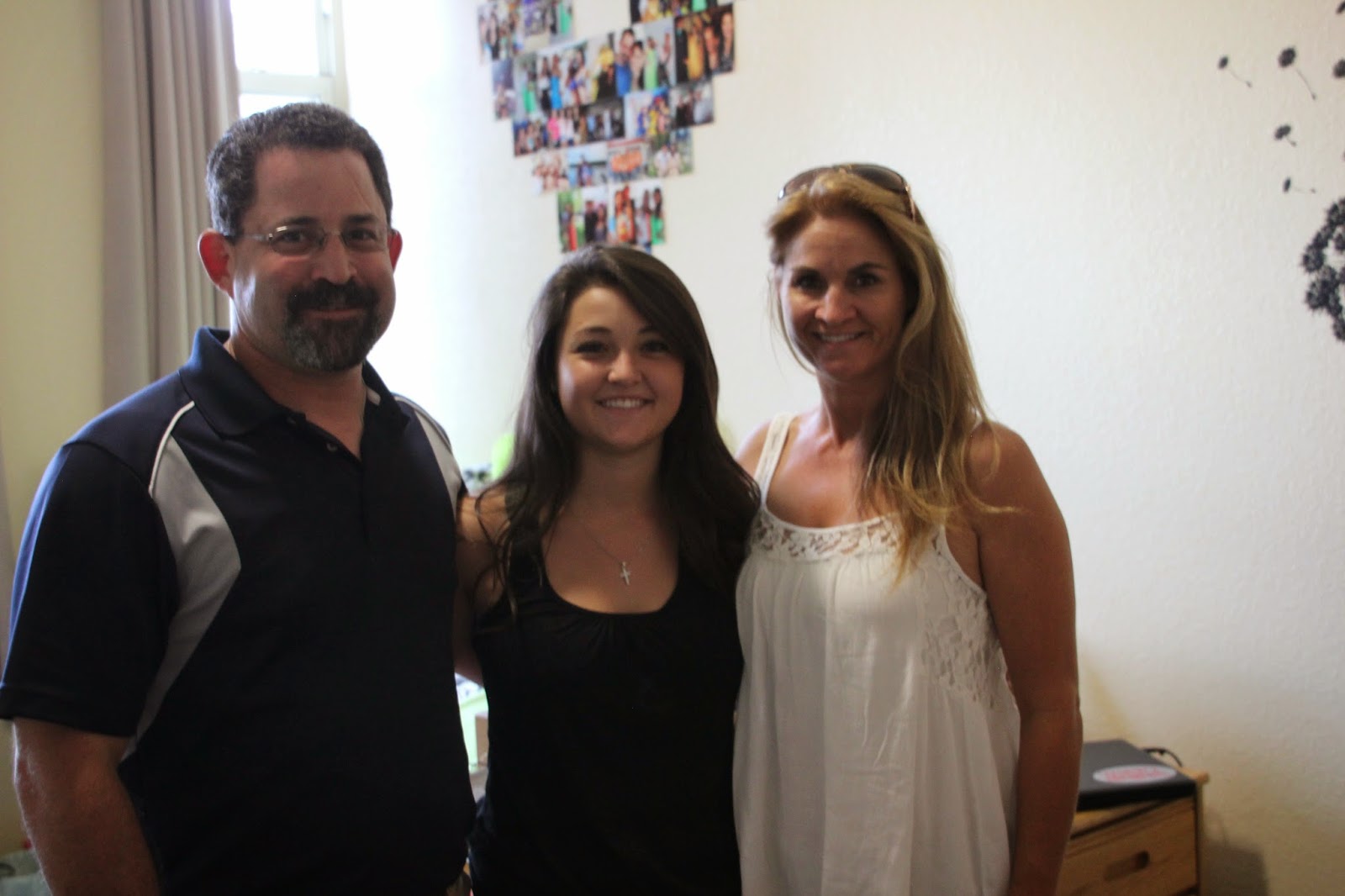 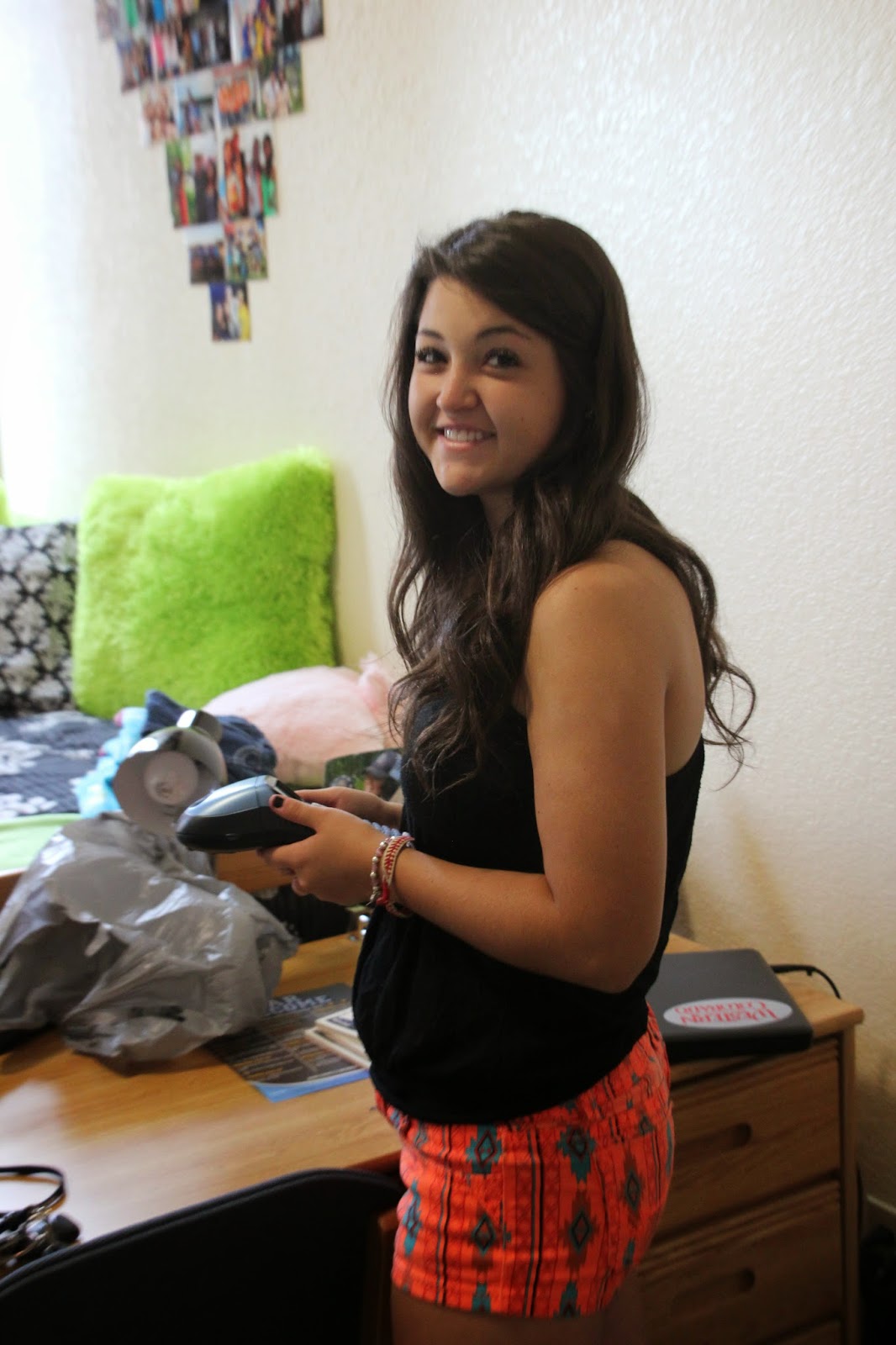