Take a Hike, Part One

So, I had a nice long sleep last night and a brief cat-nap at work while on my lunch hour (have I ever mentioned how fortunate I am to have a couch in my office?); I am now re-energized and ready to tackle the topic of our Labor Day hikes.

I'll start at the beginning, which is the most logical place to start.

As I said in my previous post, when we arrived at the parking lot below the Hanging Lake trail head, the lot was completely full. And, by full, I mean that there were cars parked in every available space as well as cars parked in areas that were most definitely not approved for parking; the local sheriff's department could have made a killing on parking ticket fees, you know, if there had actually been an officer out writing tickets (there was not).

We determined that our best bet would be to turn back and park in the second nearest parking lot, which happened to be about 3/4 of a mile away, according to the lie that Hugh told me at the time.

So, that is what we did. We parked, strapped on our gear, and started out on the bike path that runs along the river. It was a beautiful day for a stroll and we settled into a nice pace, interrupted by the occasional bike rider.

About a mile and a quarter into our 3/4 mile stroll, we passed an electronic billboard that warned motorists of the fact that the Hanging Lakes parking lot-located 3/4 of a mile up the road-was full, which was when I realized that Hugh was a lying liar. At that point, however, I had no choice but to continue on. I did file the information for future reference (and as ammunition for the next time we have an argument and I need an example of Hugh's dishonesty; because passive aggressive is my modus operandus).

Anyway, we made it to the trailhead, where I was certain to read the trail map for an accurate (and honest) idea of just how far we would be hiking (two miles up, two miles down). We guzzled some water, posed for a couple of pictures, and began our ascent. 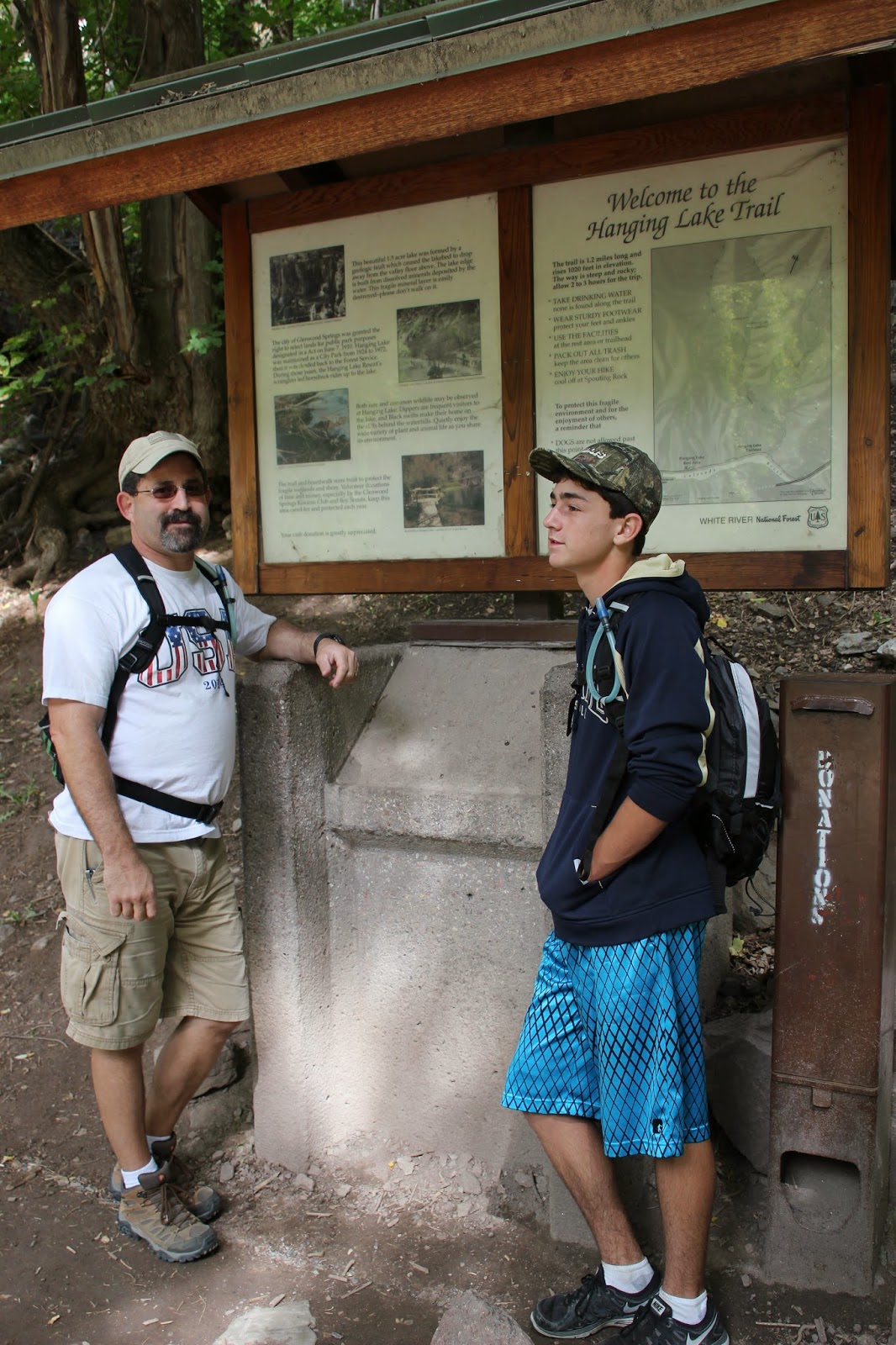 Reading the trail map, because full disclosure is important
The trail was really, really rocky and steep. There were seven bridges spanning the small creek that ran down from the top and Hugh insisted on stopping at each one for a picture. I'm not kidding when I say that I look more and more exhausted in each picture. I also visibly list to the side farther and farther the higher we climbed and the more my right hip hurt. Not to be all dramatic or anything, but,It's kind of like a photographic timeline of torture. Ok, that was a wee bit dramatic. 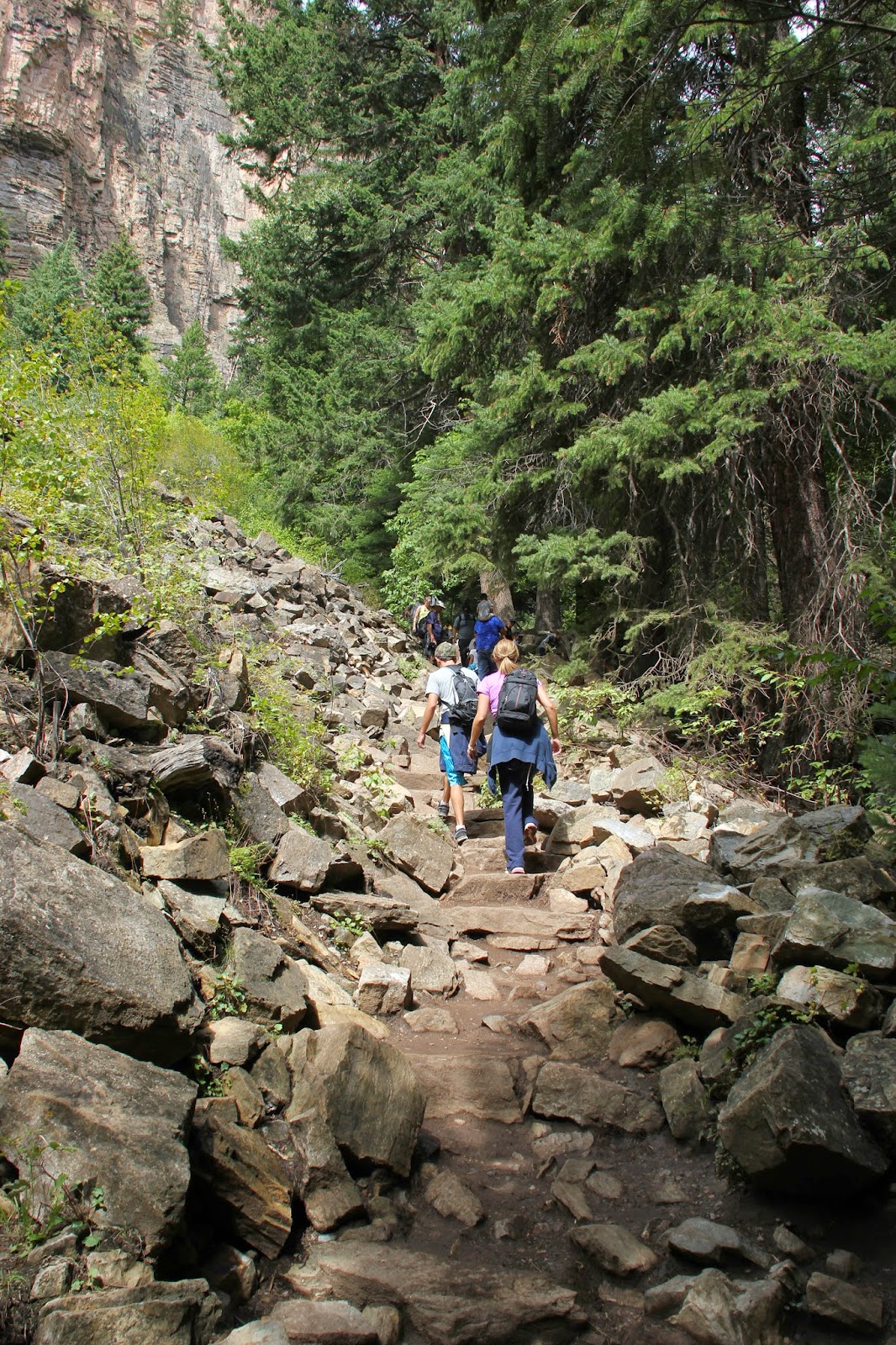 I think the biggest mistake we made was in allowing an almost-sixteen-year-old boy, in top physical condition, to set the pace. In fact, had I led the charge up the mountain, I am ninety-nine percent certain I would not have experienced the pain of grinding my hip joint into a fine dust. Of course, had I set the pace, we would still be there, but, that is neither here nor there. 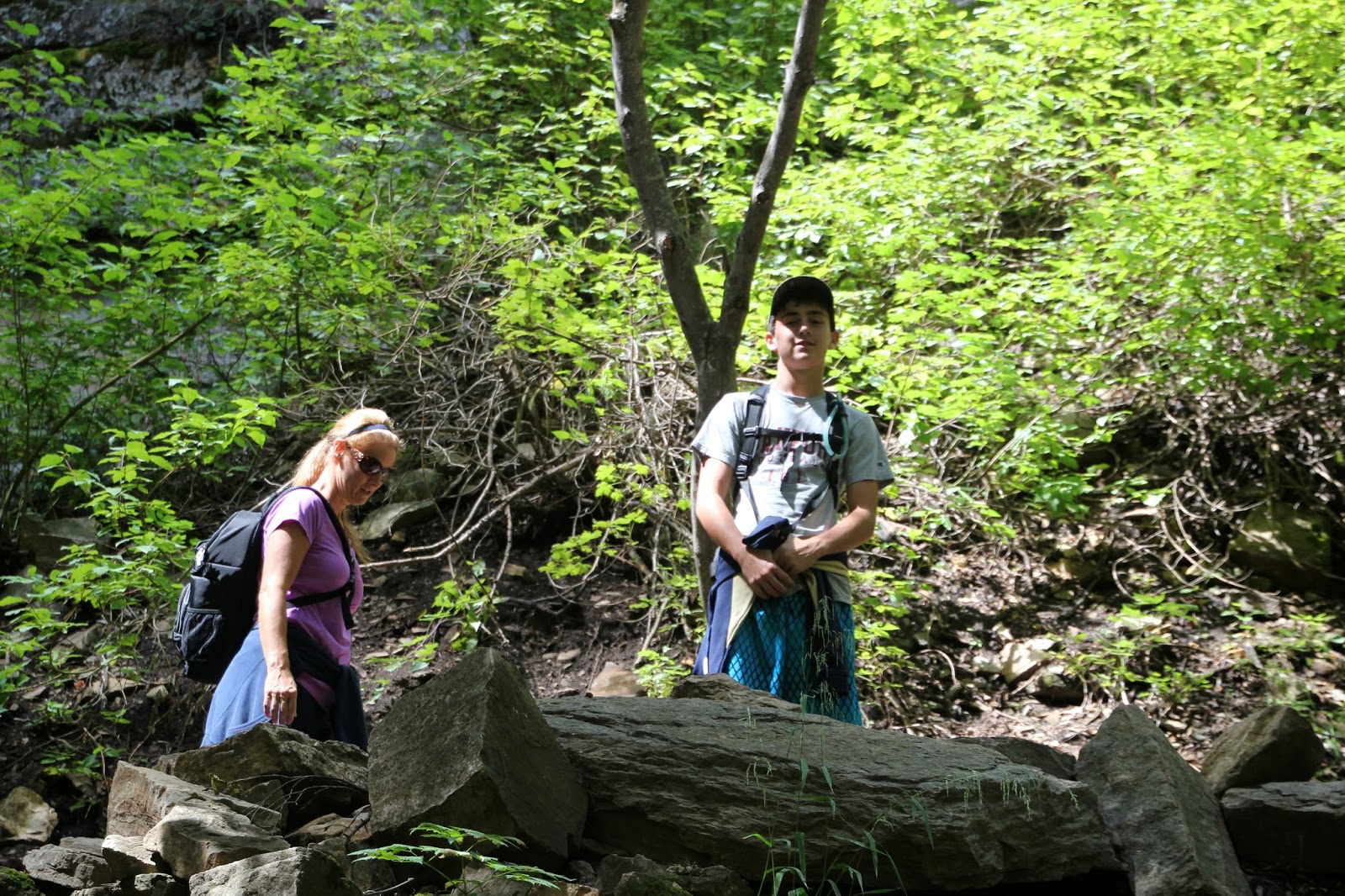 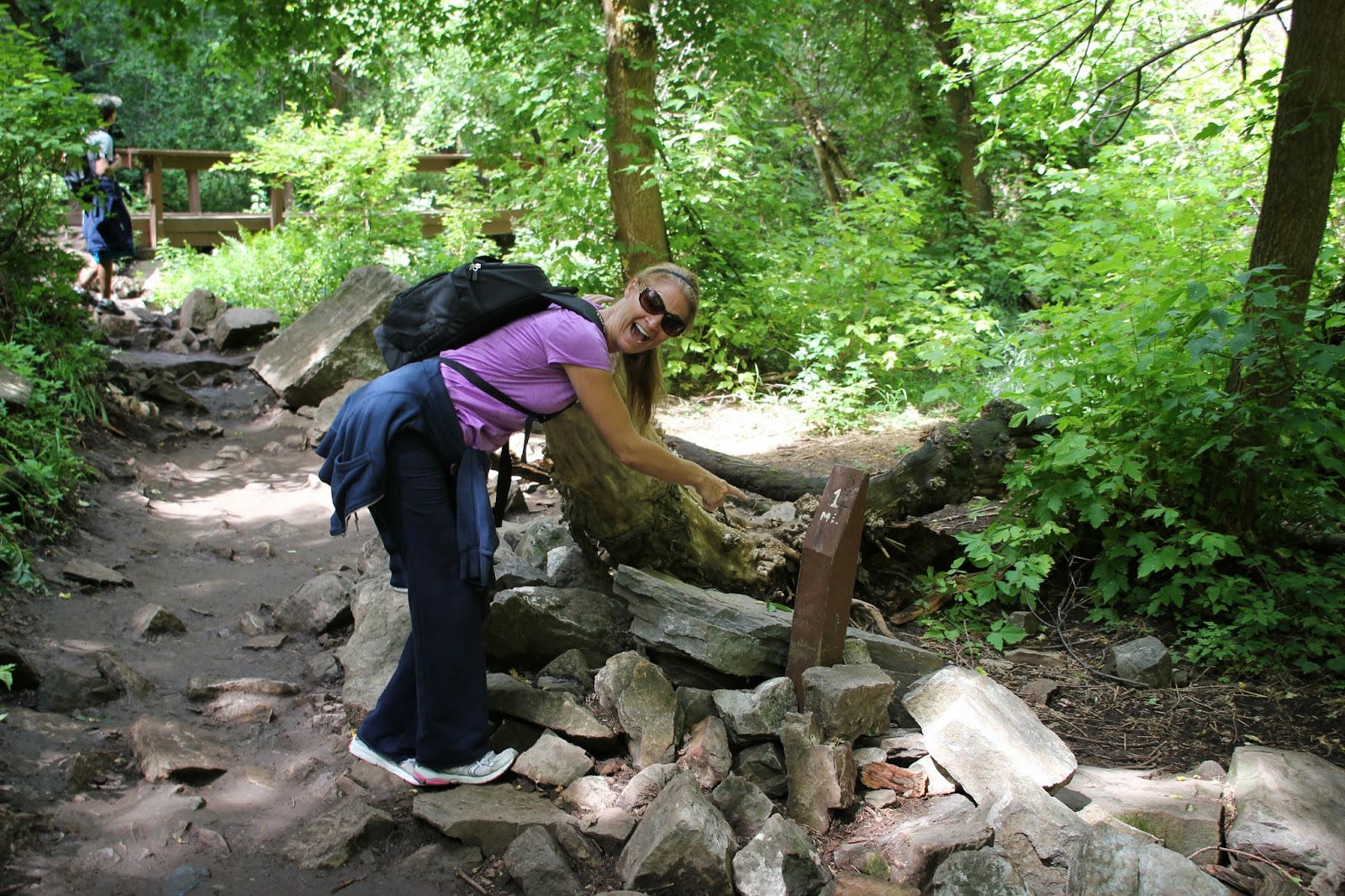 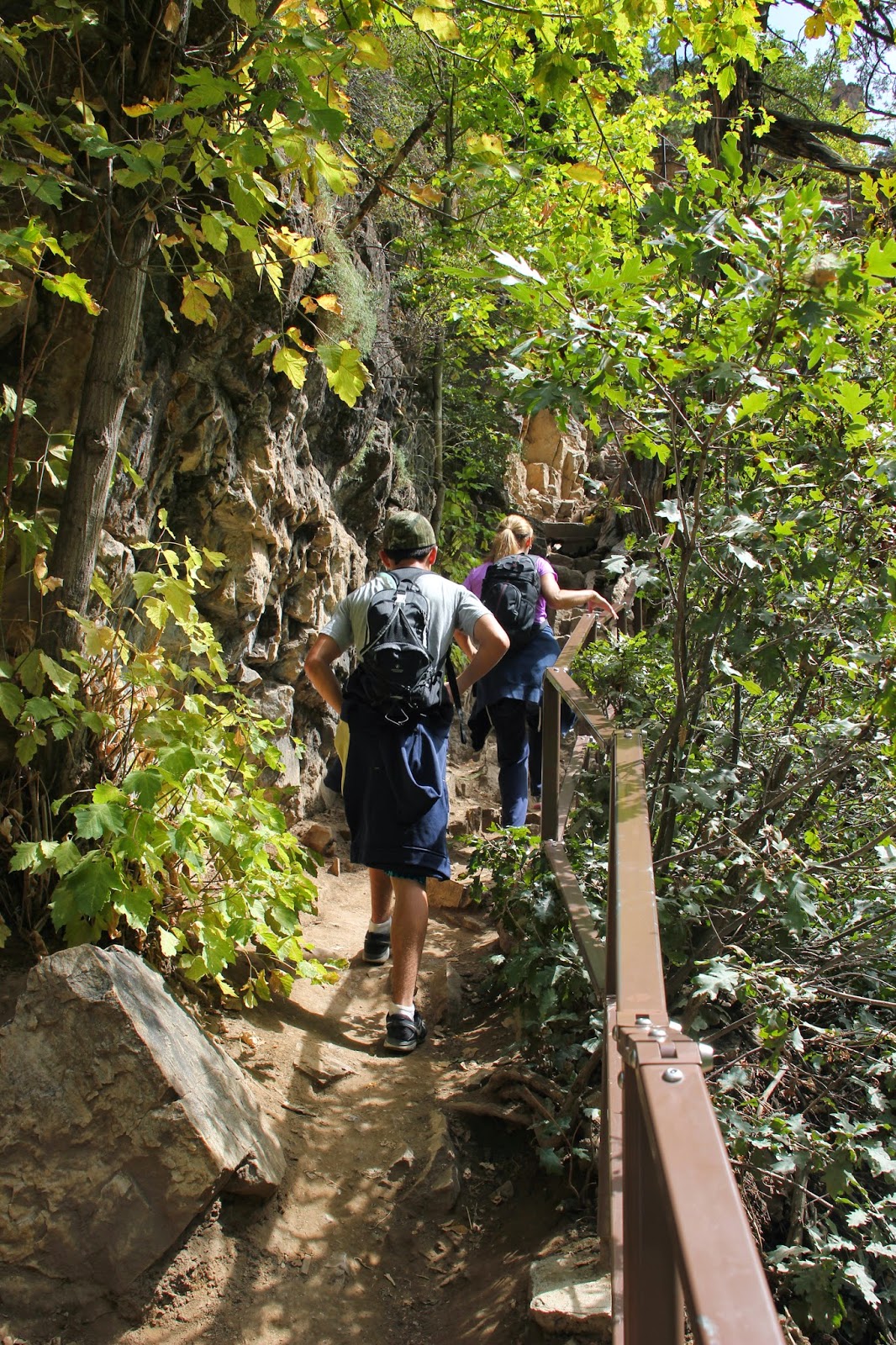 The last one hundred yards of the trail consisted of a near-vertical climb up a rock stairwell. At that point my mind was playing tricks on me and the delusions had set in. I did have a brief moment of clarity, however, during which it occurred to me that those seven bridges were probably intended to shelter trolls, since it was only logical that the Three Billy Goats Gruff resided somewhere on that mountain; only a billy goat should climb a near vertical rock wall, staircase cavalierly drilled into the face or not. 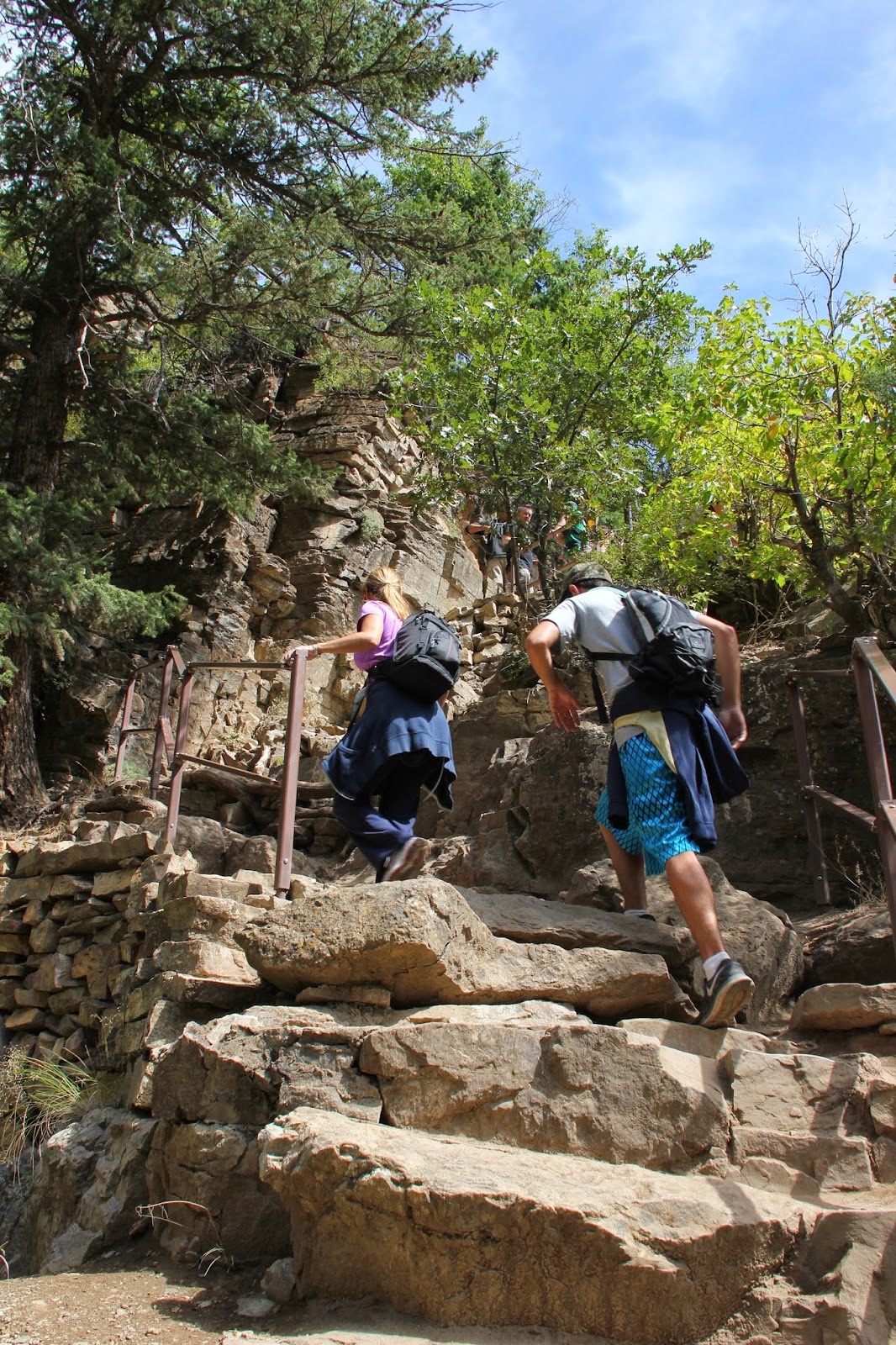 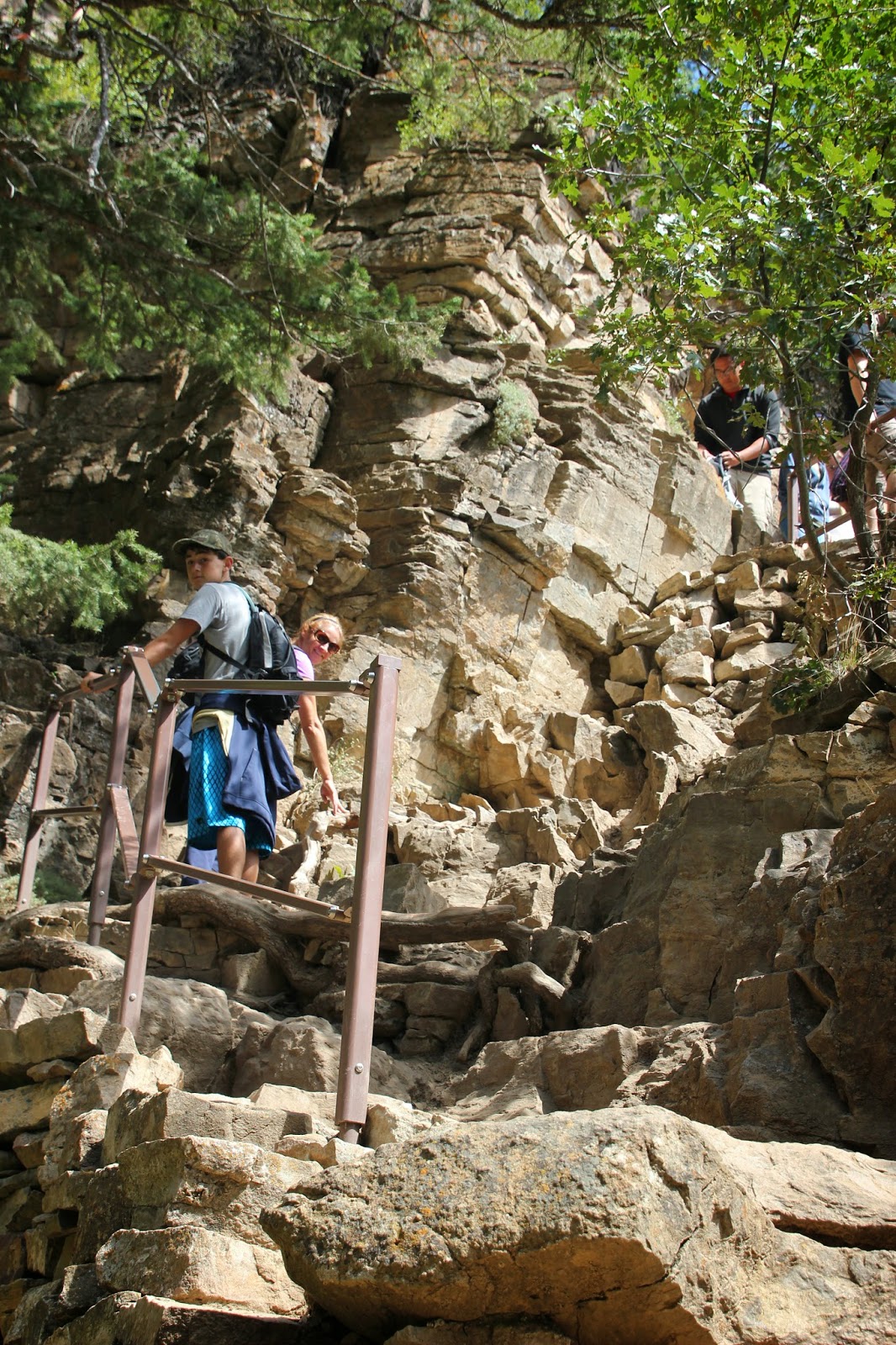 Once we made it up the stairwell of imminent disaster, we found ourselves at our destination. And, it was....not really worth the climb. Oh, it was ok, if waterfalls and breathtaking natural beauty are your thing, but, otherwise? Yeah, total waste of time. See? 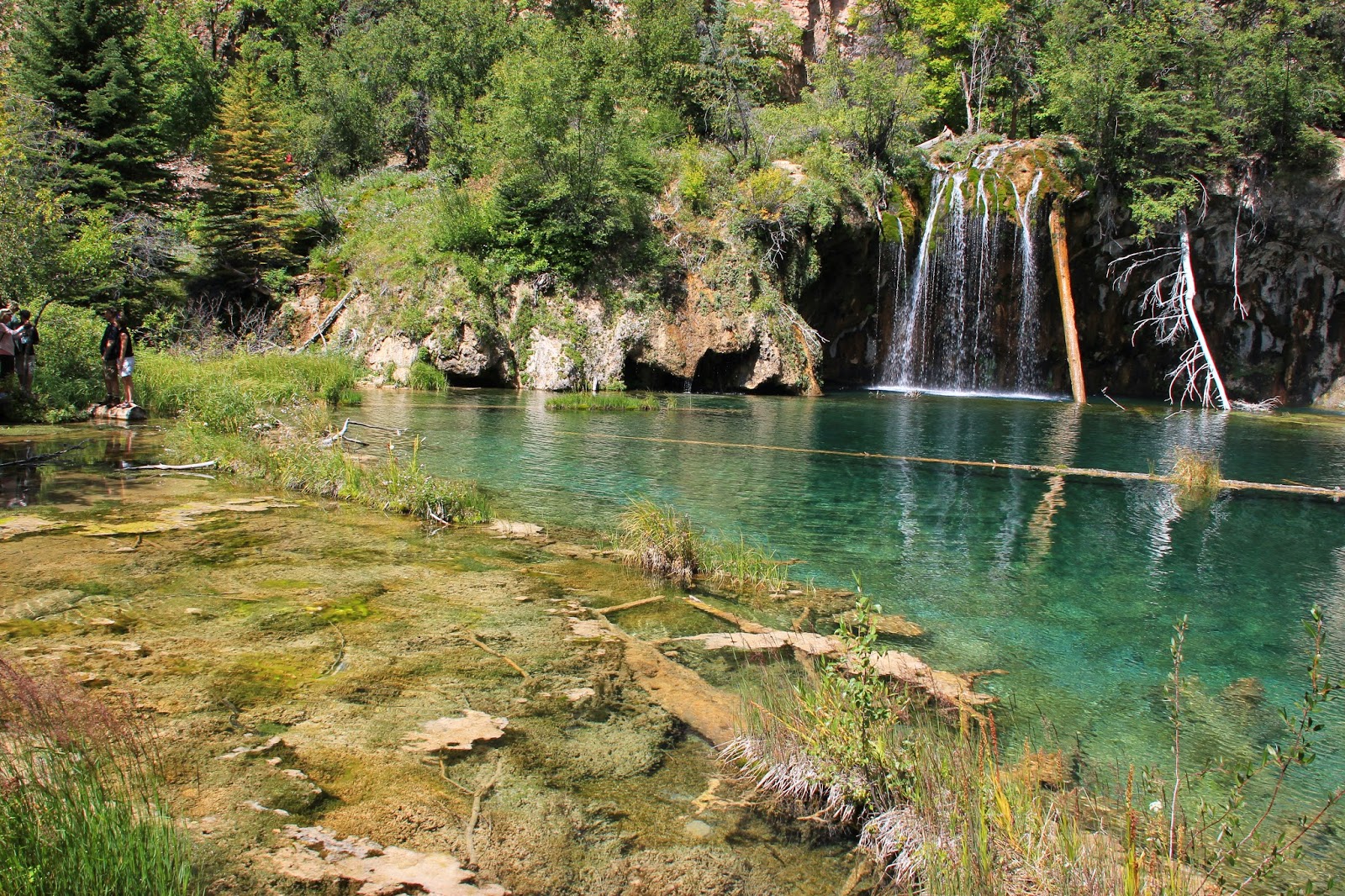 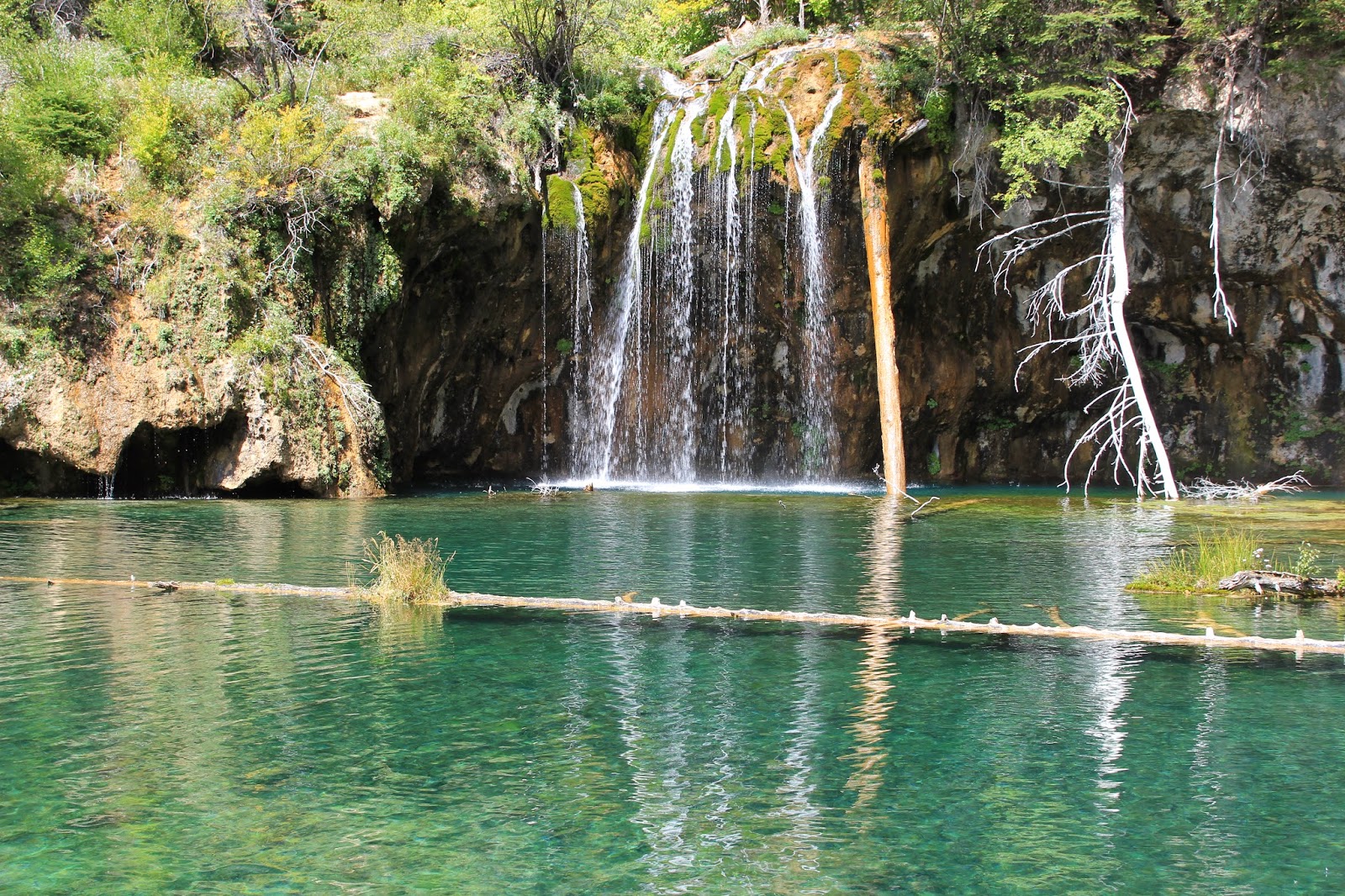 It would have been refreshing to plunge into the crystalline waters of the lake, but, sadly, the waters are protected and there is no swimming allowed. In fact, even touching the water can have dire consequences for the marine life, flora, and fauna of the lake. So, the best you can do is pose for pictures in front of the falls and hope that you have enough water left in your camelback to dribble a tiny stream over your head to cool your heated brow.

Because, after you take those pictures and eat a handful of trail mix, you still have a two mile hike down the mountain and a two-mile walk back to your car (dragging one leg because your hip joint has been ground down to the consistency of sand).

The hike back down the mountain took about ten minutes less than the hike up, give or take ten minutes. I think it would have been faster had the trail not been as crowded as it was (all those cars in the parking lot had transported passengers, after all), but, I also can't say that I minded making frequent stops to allow the right of way to the people ascending the mountain during our descent; I used the time to stretch out my legs (I had hoped to do a yoga series at the lake, but, alas, it was far too crowded and, I don't like to Downward Dog in front of an audience). Hugh spent the breaks taking pictures (500 photos and I only had to delete 450 due to blurriness) while the Man-Cub climbed on rocks and scaled boulders as though billy goat were a main component of his DNA (not from my side of the family, I assure you).

Once we made it to the bottom of the trail, I was feeling pretty cocky. When we eventually made it back to the car, my cockiness had been replaced with the glaring realization that I am getting old, see above: Hips Ground into Sand.

Luckily, we were able to enjoy a soak in the mineral hot springs later that evening. That, coupled with a fist-full of ibuprofen enabled me to walk the next day, which, proved useful when we arrived at our next destination: Rifle Falls State Park, for more waterfalls and some bonus cave exploration. Oh, and hiking. Can't forget the hiking (I know my hip never will). But, I'll post all about that experience tomorrow.